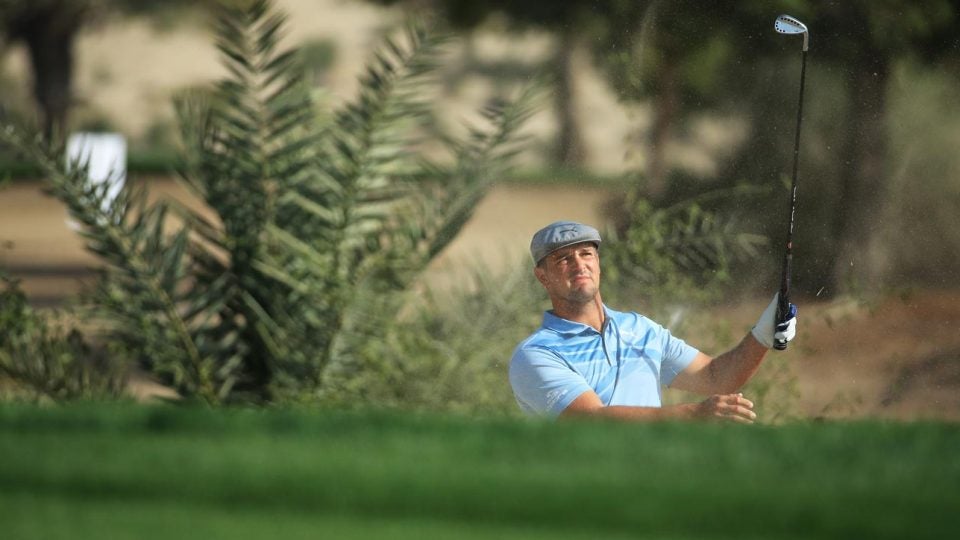 At last year’s Dubai Desert Classic on the European Tour, American Byrson DeChambeau crossed the ocean and demolished the Majlis Course at Emirates Golf Club to reach 24 under and win by seven shots. This year, Bryson is back, but it’s a much different story on the leaderboard.

The pros in the field are competing on the Majlis track once again, but it’s not the same course, not even close. The reason for the dramatic change is an incredibly difficult course setup that has the leaderboard looking more like a U.S. Open than a typical European Tour event, and the pros agree.

“This is by far the toughest I’ve ever seen it,” Louis Oosthuizen said after the opening round in Dubai. “The fairways are tight. The rough is close to U.S. Open standards, and the greens is rock hard and really crispy.”

DeChambeau, who opened with a 66 in 2019, instead grinded his way to a 70 in the first round this year, a score he was more than pleased with.

“It’s playing at least four shots harder a day if it was to stay like this, no doubt,” DeChambeau said on Thursday. “The fairways are tightened up. It’s almost impossible to hit the fairway on 18… It’s a very, very good test of golf and you have to make sure your wedge game is on and your iron play is on.”

The leader after round one was Thomas Pieters, who was able to fight through the difficult conditions to post a 67. But the vast majority of the field failed to break par, a striking difference from this point last year. But long rough and narrow fairways aren’t solely to blame. Devilishly fast greens are giving players fits.

“You know, the greens are getting really crispy,” Oosthuizen added after his round. “I think the boys this afternoon are going to have a tough time on the greens.”

“If you want to sort all the professional golfers out, just give us firm greens. The chip on the last hole, probably had 40 feet of green and all I’m worried about is chipping it in the water on the far side,” the three-time major champion said. “Firm greens really sort us out and we find it difficult. If you do miss the fairways, coming into firm greens, it’s very difficult. Firm, fast greens, I could see guys, if you get on the wrong side of things today, you would be moaning. If you’re on the right side, you’d think this is the way golf should be.”

Henrik Stenson, as solid a ballstriker as they come, also had trouble with the greens, as well as the wind on Thursday, calling his even-par 72 “certainly not a bad score out there.”

Some may blame Rory McIlroy for the difficult conditions this week, even though he’s playing thousands of miles away at the Farmers Insurance Open. Last year, McIlroy complained about how easy setups on the European Tour were and suggested that he’d play less on the Euro Tour as a result.

Stenson identified another reason for the tough setup this week in Dubai: a natural backlash after DeChambeau undressed the course last year.

“I think Bryson put everyone off last year with 24-under or something,” Stenson said. “They won’t have that one more time.”

Oosthuizen speculated that the maintenance crew would water the greens overnight to soften the greens for the second round and show a little mercy for the struggling pros, and it appears that happened. Scores in the second round were lower and even featured a 65 by Tommy Fleetwood. DeChambeau shot a 67 to jump into a tie for third. Still, though, after 36 holes only 31 players are under par.