DUBLIN, Ohio — Boo Weekley teed off Sunday morning at the Memorial alone in 73rd, last place among players who made the cut. He wasted no time completing his final round.

In a week plagued with talk of slow play, both at the Memorial and at the U.S. Women’s Open, Weekley was a beacon for no time wasted. He teed off at 8 a.m ET. At 9:08, he birdied the 9th hole to get back to one-over for the day. He added birdies at 13 and 14, then bogeys at 15 and 16, ultimately posting a final-round 73, his second-best score of the week.

By 10:40, Weekley was in jeans, a t-shirt and cowboy boots in the parking lot. The second-to-last group was still finishing up the 13th hole. Just how fast did he play — two hours, twenty minutes?

“Two-fifteen,” he corrected with a smile. Was that his fastest round ever? He thought for a minute, then nodded. “I guess so. I never been in last place before.”

In reality, Weekley no longer was in last place. His speedy final round had actually leapt him past Ted Potter Jr. and into a tie for 71st with K.J. Choi.

Despite the lackluster weekend (Weekley shot 79 on Saturday), the 45-year-old made his third cut in four PGA Tour starts in 2019; he finished T35 in Puerto Rico and T25 at the RBC Heritage. The showing is particularly impressive considering Weekley missed all of 2018 and much of 2017 with an elbow injury and a cancer scare. 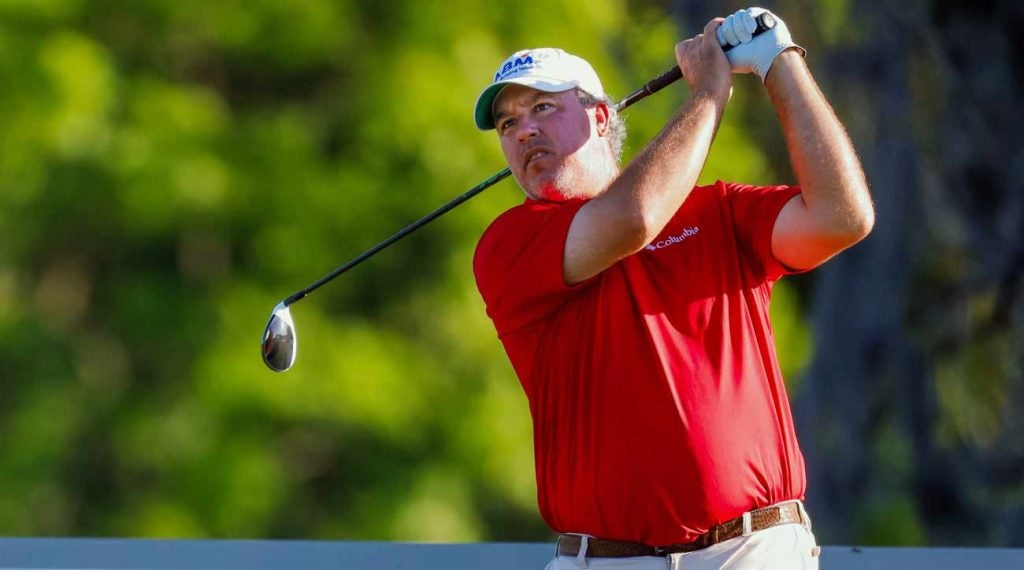 Boo Weekley does not want to contribute to any slow play problems.
USA Today

It’s worth noting that this is just Boo Weekley’s record for fastest round, not the fastest round ever. In 2016, Kevin Na finished a round at the Tour Championship in under two hours. In 2017, Wesley Bryan did him one better, playing pseudo-speed golf en route to an 89-minute finish at the BMW Championship. Best of all? He shot 69. But Boo Weekley doesn’t exactly have a runner’s physique, and earlier this week dived into his penchant for milkshakes and Natural Lights. All things considered, that’s a pretty speedy showing.

Earlier in the week, Tiger Woods and Bryson DeChambeau each voiced their displeasure after their group was put on the clock in the first round. At the U.S. Women’s Open, some rounds threatened six hours, and one amateur was penalized a stroke for slow play.

Weekley, as always, was a breath of fresh air.