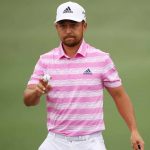 Can Xander finally break through and win a major?

We are through three rounds at the 2021 Masters and have been set up for yet another exciting Sunday finish at Augusta National. There are a number of intriguing storylines that have the potential to play out in the final round, but at the end of the day, there can be only one champion. Here are the seven best possible storylines assuming a winning score of 13 under.

Corey Conners has turned himself into one of the best ball strikers on the PGA Tour over the past several years, so a win at Augusta National would make sense. But would it move the needle? Not necessarily. A win by Conners would represent the second time a Canadian has won the Masters, and the first since Mike Weir accomplished the feat in 2003.

Not many had Will Zalatoris on their radar coming into the week, but after three-straight rounds under par to begin the week, he’s put the golf world on notice. The Masters rookie has not succumbed to the major-championship pressures yet, and if he were to nab the green jacket, he’d be the first rookie to win since Fuzzy Zoeller in 1979. He’d also be the first active Korn Ferry Tour player to win a major.

Marc Leishman has come close in majors before, but he’s never quite been able to get over the hump. What better way to claim his first major title than by coming from behind on a Sunday? Fellow Aussie Adam Scott won his first major in similar fashion — maybe they play better as chasers?

There was no one who took advantage of the soft, post-delay conditions more than Hideki Matsuyama. With rain soaking into the previously crispy Augusta greens, Matsuyama went on a tear. His 30 coming home separated him from the pack and will make him the man to beat come Sunday.

For a moment this week, it looked like Justin Rose could run away with the green jacket, but after his majestic back nine on Thursday, he hasn’t been able to sustain much momentum. Rose has a U.S. Open title to his credit (not to mention a playoff loss at Augusta in 2017), so his pedigree is major-worthy. A win would make Rose the 18th man to win both the U.S. Open and the Masters.

If we are ranking the best players to have never won a major, Xander Schauffele is definitely on the list. The 27-year-old has seven top-10 major finishes in 14 starts, so he’s been here before. Perhaps this time he can finish the job?

Would anything send a surge through Augusta National more than a charge from the Golden Child? He starts the day six shots back, so it would take a truly special round from Spieth, but considering he nearly pulled off a similar feat as he tried to track down Patrick Reed in 2018, it’s not unthinkable. If he were to pull it off, it’d be hard to imagine a bigger story in golf happening this year.