Next time you’re name-dropping around the 19th hole, impressing your companions with your insider golf knowledge, try tossing out “Phil Friedmann” and see what kind of response you get. When your buddies draw a blank, tell them you’re referring to a 74-year-old Midwesterner who didn’t take up golf until adulthood, never worked directly in the industry and yet stands as a driving force behind the most tantalizing new course of the coming year: the Sheep Ranch at Bandon Dunes, in southern Oregon. Then you can recount how that came to be.

For that, you’ll have to turn back to 1963. Classes are in session at Amherst College, in western Massachusetts, and Friedmann, an enterprising freshman, is earning cash under the table with a hamburger stand he runs from his dorm room. One of his loyal customers is Mike Keiser, a fellow freshman from down the hall.

“I remember that I liked him,” Friedmann says, “and that he liked the burgers.”

The two form a friendship. Some years after college, they cofound a business. It’s based in Chicago, and it specializes in recyclable greeting cards. In those early days, it’s just Friedmann and Keiser sharing an office, if not always the duties. Some afternoons, Keiser, who’d played on the Amherst golf team, signs off early and slips out with his clubs for a twilight round.

In time, Friedmann decides that he should join the fun. A newbie to golf, he takes to the game with an old soul’s fervor. Keiser’s fondness for it runs even deeper. He dreams of building great courses of his own.

In the 1980s, with greeting card sales going gangbusters, Keiser starts buying land in southern Oregon, patching together the seaside parcels that will one day give rise to Bandon Dunes. Friedmann looks on with interest but remains uninvolved, other than to float his friend a loan when the cost of building Bandon stretches Keiser thin.

An exception comes with a scenic swatch of real estate just north of the resort. When it goes up for sale in the late ’90s, Friedmann and Keiser go dutch on it, splitting the purchase 50-50. They call the property the Bally Bandon Sheep Ranch, a moniker inspired by Ballybunion, a storied Irish links they both admire, but also by a misunderstanding: Friedmann thinks that bally means beautiful in Gaelic. It does not. But no matter — the Sheep Ranch is beautiful.

Rumpled and exposed to the Pacific Ocean winds and mist, it commands just over a mile of coastline, more than any of the courses at Bandon Dunes. And where Bandon’s seaside bluffs are razor-straight, the Sheep Ranch’s jut in and out intriguingly. Surveying the site, its owners picture building a golf course on it, one that is intentionally rudimentary — maybe even grazed by sheep.

For a period, that’s exactly what the property becomes. In the early 2000s, as Tom Doak is designing Pacific Dunes, the second 18-hole course at Bandon Dunes, Friedmann and Keiser contract Doak and Don Placek to rough out a layout on the Sheep Ranch. “Rough” turns out to be an understatement. The bare-bones track has 13 holes but no prescribed routing. You can play it in any sequence you want. There is no irrigation. The fairways are like fields. Only the greens get watered, now and then, with help from a fire truck. For a spell, the maintenance crew includes a flock of sheep, but they wind up being underwhelming mowers. Plus: coyotes! The sheep are sent away, another quirky footnote in Sheep Ranch history.

If the course itself is odd, consider what it takes to land a tee time on it. You can’t call the resort; the Sheep Ranch isn’t officially part of Bandon Dunes. Instead, you follow steps straight out of Scooby-Doo: You contact a local caretaker and arrange to meet him on an unmarked dirt road, where, in exchange for a hundred bucks, he unlocks a chain-link fence and sets you loose, alone, on the property.

The Sheep Ranch carries on like this for years, with an air of secrecy: a riddle wrapped in a mystery awash in fescue. In 2003, Sports Illustrated runs a story on the Sheep Ranch that reads like a Deep Throat investigation. It bills the course as “Project X.”

To be fair, Friedmann and Keiser aren’t quite sure what to make of the Sheep Ranch, either. They consider turning it into a private club, then decide that that’s off-brand for the area’s growing reputation as a holy ground for public golf. Keiser harbors visions of another world-class course, in keeping with his offerings at Bandon. Friedmann isn’t fiercely opposed to that idea, but he also digs the Sheep Ranch as it is. 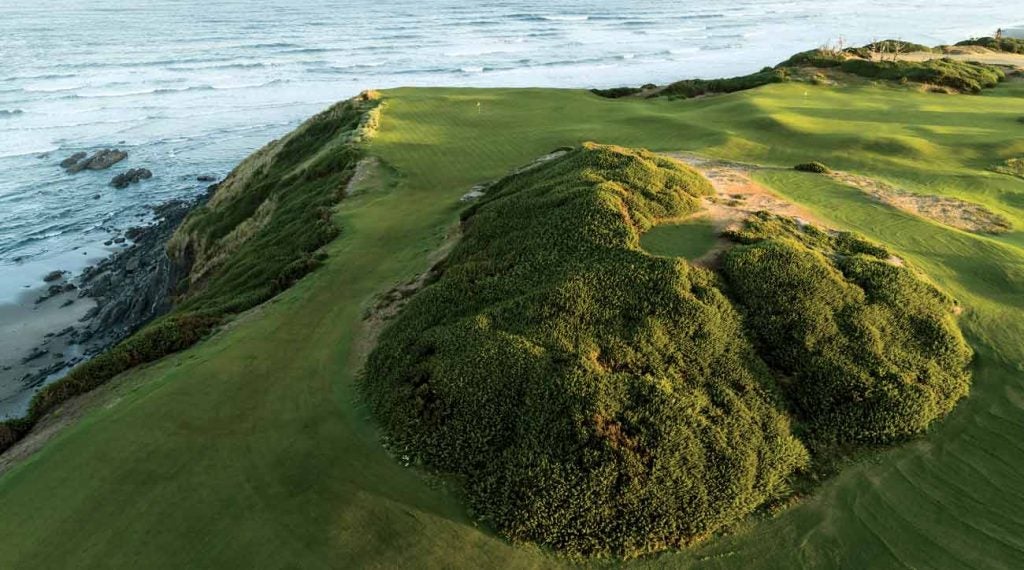 Views from the verdant dune include the greens for Nos. 3 and 16. The tee box for No. 4 sits atop it.
Courtesy Bandon Dunes Golf Resort

“It was a sanctuary, and in a selfish way, I was enjoying having it stay that way,” he says.

Shared ownership of the course ensures that nothing happens quickly. Neither man can proceed without the other’s say-so, and, besides, though they’d sold their greeting card business in 2005, each has plenty on his plate already. Keiser is busy building other courses, including Sand Valley and Cabot Links. Friedmann is occupied with investments.

Their paths remain divergent, until 2016, when their interests in the Sheep Ranch converge again. With Cabot and Sand Valley in good hands, Keiser’s schedule opens. Ditto for Friedmann, who not only has free time but an existential moment. In recent years, his feet and knees have gotten achy.

“And with those achy feet and knees came the growing realization that things don’t go on forever,” Friedmann says. “I was ready for a passion project.”

Even then, nothing is a given. By conventional golf course standards, the Sheep Ranch acreage is small, not an easy fit for 18 holes. Multiple architects submit proposals. But Friedmann and Keiser opt for Bill Coore and Ben Crenshaw. Though course routing is a dark art that Coore has mastered, it still takes him months to puzzle out the problem, walking the Sheep Ranch in gales and downpours, with Keiser and Friedmann plodding at his side.

“There almost wasn’t a day out there when I didn’t think to myself, Maybe there is no way to get 18 holes here,” Coore says.

The solution he arrives at is a stunner. Seizing on the drama of the setting, Coore plots nine greens along the ocean’s edge, each of which you approach from different angles. One is a shared green for the 3rd and 16th holes that sits on a promontory called Five Mile Point and looks out on a vista that goes on forever. The inland holes aren’t shabby either. The par-5 first progresses from a high point on the property through a corridor of pines that opens to the ocean in full-frontal. The 11th hole, also a par 5, moves gradually uphill toward a green set in the crater of a sand quarry left behind from the construction of the original course. Coore comes to think of this as the “Volcano,” with its front rim blasted away to allow for the approach.

Because the soil beneath the Sheep Ranch is not sand, the course is not technically a links. But it plays like one, inviting the ground game. It helps that there isn’t a single sand bunker, a striking design choice that is also a concession to the location: The Sheep Ranch is the windiest site at Bandon, and Coore wants to keep things friendly for the players. Also, sand bunkers might just get blown out.

Another of the Sheep Ranch’s defining traits is the way that it feels cozy without being cramped. The shared green is a space-saving measure, as is Coore’s decision to cluster the tee boxes for several holes, each radiating out in different directions to avoid the perils (and aesthetic pitfalls) of fairways running snugly side by side.

Along the way, a compromise is found for opposing tastes. Friedmann favors gorse and trees, while Keiser is something of an anti-Lorax; he’d rather have the vegetation cleared away. Where Keiser has no problem with occasional blind shots, Friedmann would be happy if he’d seen the last of them. Each finds it in himself to meet somewhere near the middle. 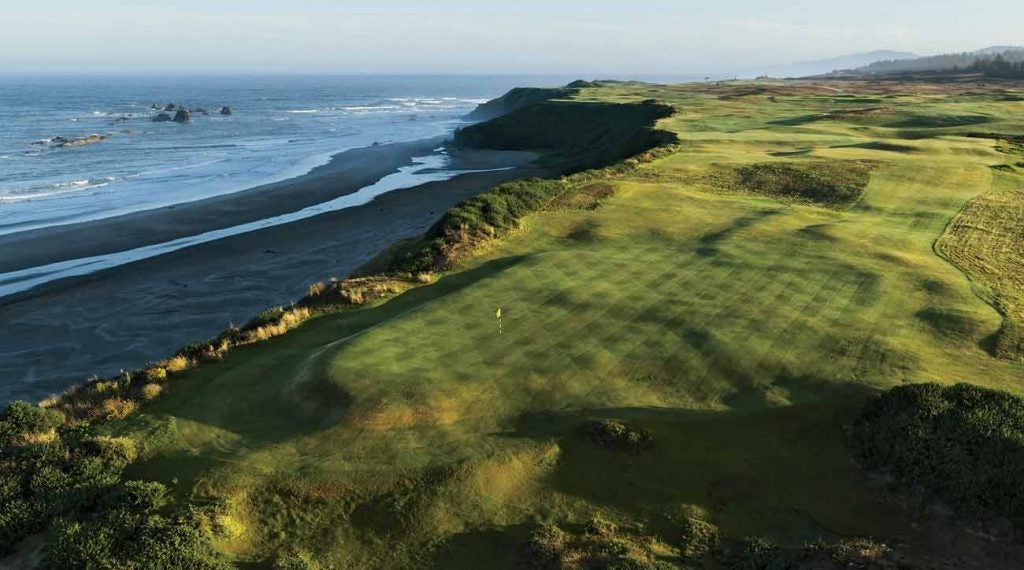 The green on the par-3 7th, one of nine that hug the Pacific Ocean.
Courtesy Bandon Dunes

Anyway, Friedmann is thrilled with the results. This past fall, when nine holes of the Sheep Ranch opened for preview play, he became a fixture on the property, interviewing golfers, mining them for input. He encouraged them to gripe, but what he got was glowing.

Grill-room debates are a Bandon tradition; at some point during your trip, you’re practically required to rank your favorite layouts. Based on the early feedback, the Sheep Ranch seems poised to complicate the conversation.

Says Friedmann, “The overall theme has been: There’s no reason this doesn’t become the best course at Bandon Dunes.”