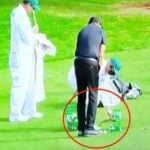 Phil Mickelson chips in the practice area at Augusta National.

Maybe you have noticed this before. We certainly have not. At least not until it was shared by the @golfrabble Instagram account.

The clip apparently spots one of Augusta National’s newest (or perhaps not well known) innovations among its long list of, well, innovations.

In the video of a live look-in on Golf Channel, Phil Mickelson chips in the practice area as a caddie from off the screen walks into the picture. He walks near Mickelson, grabs a full bucket of range balls from an underground hole (not visible on TV) and replaces it with an empty bucket. That bucket then slowly disappears beneath the ground like it’s on some sort of conveyor belt. Houdini-like? Maybe.

Augusta National has not immediately responded to GOLF’s request for comment on the complexity of the contraption. One Instagram user, however, who says he lives in Augusta, Ga., commented on the Instagram post and said: “The practice greens have pipes that run to each of them. They will push the balls in the cup and back in the tent someone will press a button and the balls return to the tent.” Seems like a likely explanation.

So the next time you run out of balls at your own practice facility and have to (gasp!) gather them yourself, just remember to lobby the club GM for an underground collection system like you saw at Augusta National. Hey, it could happen?