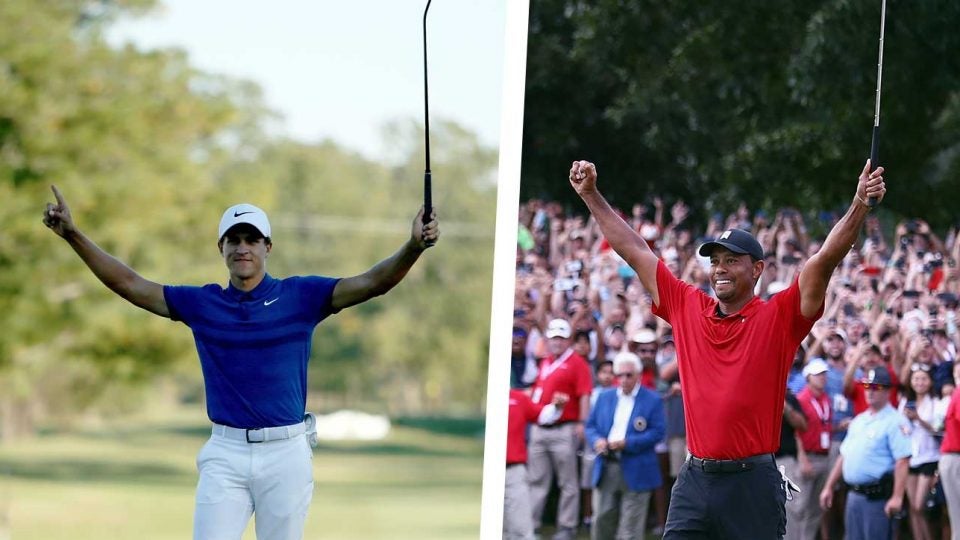 Cam Champ and Tiger Woods sure know how to celebrate similarly.
Getty Images

Now *that* is how you put a charge into the Fall Season. Thank you, Cam Champ.

What are the second-shot clubs that Cameron Champ hits on Augusta’s four par-5s? Assume he catches his driver flush, with a slight draw. And will he have to hit 3-wood off the tee at 13, to prevent his drive from going into Rae’s Creek in front of the green? -Paul (@PoolSharkPaul)

First of all, he has to qualify for the Masters — victories at opposite field events don’t come with a coveted invitation to Augusta. But when Champ does play his way down Magnolia Lane, he will have wedges into 13 and 15, a short-iron into number two and maybe a 4-iron into eight. The mind reels, and that was before considering whether he has to lay up short of the creek.

Why haven’t the USGA and R&A controlled the distance the ball is traveling? Why do we keep having this discussion? Golf should not be only about how far you hit the ball. It’s sad some great golf courses are now obsolete. -@MikeyBateman1

I’ve kvetched about this extensively, but, yes, the ruling bodies have put golf in a ridiculous position by utterly abdicating their role as stewards of the game. Modern athletes, with highly specialized training regimens and diets, wielding cutting-edge equipment and swings optimized by Trackman and an army of specialists, are completely overwhelming the outdated playing fields. The only defenses are cartoonish — think the greens at Shinny and rough at Le Golf National — and they reduce the skill factor dramatically. The obvious solution (bifurcation) would harm the equipment industry while taking away a lot of the fun of spectating. (I don’t want to watch Cam Champ drive it 275…I can do that myself.) To test this new legion of bombers while allowing them to still hit driver demands courses be at least 9,000 yards, but that would require an obscene amount of water and land and make the game even slower than it already is. So it’s a quagmire with no easy solutions, and the problems become more obvious with every 350-yard drive, exciting as they may be.

As my Scottish caddie once said, fer fook’s sake! I enjoy hyperbole as much as the next guy, but things are already getting out of hand. Then again, maybe this isn’t that crazy of a question, given that Champ plays the modern Tour game and Tiger is a dinosaur who still — gasp — enjoys hitting irons off the tee. There are two dozen Tour setups that are in Champ’s wheelhouse, while Woods’s controlled style is better suited for only a handful (of course, these tend to be higher status events, but that wasn’t the question.) But who will bring their A-game more often? Now comes the hard part for Champ, adjusting to overnight stardom while he eyes fast cars and brighter lights. Last season, Woods consistently played at an incredibly high level, even as he squandered a bunch of opportunities. Gotta think he’ll be a more efficient closer this time around. Then again, Champ has already matched Tiger’s victory total from last year. I’m just going to cop-out and say each wins twice.

First Bubba, then DJ, now Cam… we keep getting guys that hit it further and further but at what point will we reach the physical limits of humanity on driving a golf ball? #AskAlan -Chris (@cstiles24)

I’ve been thinking about this a lot, too. Clearly we’re not there yet! Guys in their 20s are the first golfers who grew up exclusively with solid-core balls and 460 cc titanium drivers, so the only way they know how to swing is with abandon. Barely two decades ago the driver was among the most exacting clubs to hit; finding the tiny sweet spot was paramount, and the penalty for a mishit was massive, so the swings were more controlled. Now that the equipment is more forgiving speed is what matters, and Champ has taken this new game to the illogical extreme. But somewhere out there there is a kid who will be taller, stronger and with even more efficient mechanics, and now he he has a new role model, too. Gulp.

Yeah, me too. I’ve been saying for a while that Big Tony is the nicest guy in golf. That’s a good thing, of course, but Finau has displayed a dispiriting inability to win despite manifold opportunities. Something is clearly missing. I’m not saying Finau has to morph into Patrick Reed but he does need to discover some kind of mental edge to get him over the hump.

Any comments on the grit P. Reed showed on Sunday breaking 80 when he didn’t have his best stuff? -Chad (@chadwickswill)

Even more disappointing was Reed’s mealy-mouthed comments about the Ryder Cup. If you’re gonna lob grenades, you better be prepared to deal with the explosion.

Any thoughts on the Brazilian election? Haha #AskAlan: on the golf side, the Olympic Course in Rio is still going strong. Surprise or a testament to the golfing community? -@ViniciusAlvarez

All I know about that election is what I get from Glenn Greenwald’s Twitter feed, so it’s probably best to ask someone else. But I’m thrilled the Olympic Course is thriving. It was a great showcase for the sport and needs to endure as a symbol of golf’s reemergence in the Games. A lot of powerful organizations are invested in the course’s success — the PGA Tour by way of the Latinoamerica Tour, World Golf Foundation and USOC among them — but ultimately it takes everyday Brazilian golfers to keep the course going and it’s awesome that they’re still turning out.

I like Sherwood but it ain’t in the class of the others. L.A. North is spectacular but that membership is among the most uptight on the planet…no thanks. I love Riviera but to me there’s something magical about Bel-Air — so many great holes, and it’s a unique experience with the sweeping views and a winding journey involving canyons, tunnels, elevator rides (!) and the Swinging Bridge, to say nothing of Jerry West playing cards in the clubhouse every afternoon. Throw in the ongoing Tom Doak restoration and it’s my choice by a whisker.

Air Keegan. Why is he the only one who gets Jordan Brand sponsorship? Pet theory: gambled and won during an emergency 9 with MJ, probably would have lost his house if he’d lost the wager that day. Your thoughts? -@JohnnyVelvet23

This has long been one of golf’s greatest urban legends. On a podcast last year I asked Keegan about gambling debts involving Jordan but he shot down all the rumors. Some things are too good to fact-check!

Gotta love the brevity here. It reads like poetry. Anyway, for Tiger to win a major next year would feel a little too tidy. It’s been a decade of almighty struggle for him. I think the exquisite torture continues for at least one more year.