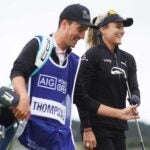 Lexi Thompson, with a local caddie at Carnoustie, is in good shape after two rounds in the final major of the year.

Lexi Thompson is in the mix at the AIG Women’s Open, and she has some local knowledge helping her out.

Thompson, who is just two off the lead after 36 holes, has local Carnoustie caddie Paul Drummond on the bag this week. Thompson said she is no longer with her regular caddie, Jack Fulghum, so she got in touch with some people at Carnoustie and they connected her with Drummond.

After rounds of 69 and 70, Thompson and Drummond are off to a good start.

“He’s such an amazing person,” Thompson said. “Great personality to have out on the bag. He caddies out here a bunch and is a great player as well. So that’s even better. Just the local knowledge, especially for me, I don’t play over here a ton, only really once a year. So knowing the local knowledge of the golf course, the bounces, where to miss if you need to, it helps out tremendously and makes you a lot more free over certain shots.”

Fulghum last caddied for Thompson at the Olympics in Tokyo, but he struggled with heat exhaustion in the opening round and Thompson used fill-ins for the rest of the week.

“I think he’s doing better right now. That extreme heat, 97 feels like 110. It was probably the hottest that I’ve ever played golf in too,” Thompson said. “It’s definitely worrisome, just having him out there. It was so hot. You couldn’t drink enough water, but he’s doing better now and getting healthier. So all the best for him.”

Asked if he’d be on the bag again, Thompson said, “I think we’ve kind of separated ways for now.”

Thompson sits at five under and two behind co-leaders Mina Harigae and Georgia Hall, with some players still finishing up their second rounds. She has 11 LPGA wins but hasn’t won since June 2019.

“My game’s definitely in a good spot,” Thompson said. “It’s probably the hardest I’ve ever worked on my game, in the mental side as well. I went home five days [after the Olympics]. I forget what day I landed, but I was out the next morning grinding on my game. I probably practiced five to six hours a day out on the golf course for those four or five days and training twice a day. It was just a lot of hard work. That’s how I always am. If I’m struggling, I’m going to be right back out there, just trying to keep on improving on my game. Even when I’m playing well, there’s always something you can improve on. So I was right back out there to it.”