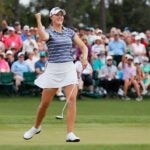 After a one-year hiatus, the Augusta National Women's Amateur is back.

After a one-year hiatus, the Augusta National Women’s Amateur is back for 2021. With the Covid-19 pandemic forcing a cancelation of the event in 2020, this will be just the second playing of the prestigious women’s tournament.

Jennifer Kupcho outgunned Maria Fassi in a classic duel in the inaugural event nearly two years ago, and though those two stars are now on the LPGA circuit, there is plenty of firepower in the field.

The field has been slightly expanded this year to accommodate players who received invites last spring and did not get to compete, provided they did not turn professional. There were 72 players in the 2019 field, and this year that number has swelled to 85 players competing in the 54-hole event.

Here are a few notable names who will be competing in the 2021 ANWA.

Linn Grant – The No. 2-ranked amateur in the world, Grant returns to the ANWA for the second time after missing the cut in 2019. The 21-year-old won two professional events in her native Sweden in 2020, and also finished T23 at the U.S. Women’s Open to end the year.

Ingrid Lindblad – Lindblad, a 20-year-old also from Sweden, is making her debut in the ANWA. The third-ranked amateur in the world won twice during her freshman year at LSU and was honored as a first-team All-American, SEC Freshman of the Year, and SEC Player of the Year.

Kaitlyn Papp – Papp took home low-amateur honors at the 2020 U.S. Women’s Open, finishing T9, highlighted by a second-round 68. The University of Texas senior is a two-time All-American and finished T5 at the ANWA in 2019.

Rose Zhang – Zhang is the reigning U.S. Women’s Amateur champion after outlasting defending champion Gabriella Ruffels in a 38-hole marathon match in the final. The 17-year-old is the No. 1 amateur in the world after winning three junior events in 2020 and notching a T11 finish at the ANA Inspiration. The Stanford commit is making her second appearance in the ANWA following a T17 finish in 2019.

Check out the entire field below.