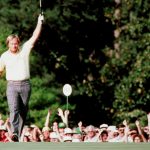 History is made annually at Augusta National — it is one of the Masters’ finest attributes. Each spring (or in 2020’s case, fall) brings with it a fresh slate ripe for a new chapter in the history of the game.

In 1997, the Masters marked the emergence of a brilliant new talent in the game of golf when Tiger Woods lapped the field at Augusta. Seven years later, in 2004, Augusta National was the setting for a victory at long last, when Phil Mickelson’s long putt on the 72nd hole fell in. In 2019, it was Woods once again as the Masters signified the completion of one of the sport’s most improbable comebacks.

And that’s only in the last 23 years.

Masters history is golf history, and vice versa, which is part of what makes it so fun to regale the tournament’s storied past. Below are six Masters anniversaries we’re celebrating at Augusta National in 2021.

Englishman Danny Willett held on to beat a collapsing Jordan Spieth for his only win on the PGA Tour.

This was supposed to be Greg Norman’s green jacket, but a final-round 67 by Sir Nick Faldo delivered the knighted one his third Masters win.

In the greatest of all Masters Tournament triumphs, Jack Nicklaus played his final 10 holes in seven under par to capture his record sixth green jacket.

Texas shotmaker Charles Coody out-dueled none other than the Golden Bear and a hotshot rookie named Johnny Miller to capture his lone major championship.