‘The tides are turning!’: How Team USA clawed back into contention at the Solheim Cup 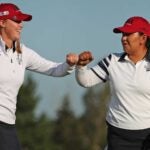 After a lackluster Saturday performance, Team USA rode the energy of the crowds to a three-point Sunday morning at Inverness.

TOLEDO, Ohio — Things were looking to go from bad to worse for Team USA on Sunday morning. After a lackluster performance on Day 1 that put them at an early three-point deficit, the Americans sleepwalked into Inverness Club on Day 2.

Over the first hour of play, the Americans did little to stifle that progress. The leaderboards showed all blue, and a blowout seemed likely.

But then, ever so slightly, the Americans began to chip away.

In the first match, Danielle Kang and Austin Ernst found their rhythm. They won three out of four holes between Nos. 4 and 7 to dig out of a 2-down deficit, and, for the first time all day, the Americans had a spark.

When Kang rolled in a long birdie try at the 13th to tie the match, she pumped both fists and let out a scream. Ernst looked to the crowd and asked for more noise. The American crowd was back in it.

“We tried to get them jacked up on pretty much every green, so that way everybody else could kind of hear those cheers,” Ernst said. “And then we started hearing more cheers from everybody else.”

The duo won the next hole, too, and the cheers from the grandstand behind No. 14 echoed across the property. From that moment on, something shifted. The Americans had life.

Despite Nelly Korda and Ally Ewing losing their match 4 and 3, American confidence was back. The leaderboards shifted from blue to black to red.

“The tides are turning, ladies!” yelled one well-served patron, to no one in particular.

When Georgia Hall’s birdie try slid past the hole on the 18th green, Team USA had their first point of the afternoon from Kang and Ernst. Just as the post-round congrats were finished, a roar came from back on the course. Focus shifted to the video board adjacent to the green.

The screen showed Lexi Thompson rolling in a long birdie putt on 17 to clinch the match for herself and Brittany Altomare. The fans around 18 lost their minds.

Jennifer Kupcho and Lizette Salas fed off the momentum in the lone remaining match on the course. After trailing for the entire match, the duo pulled even with a birdie at the 14th. They followed with wins on 15 and 16 to go dormie. The Europeans were retreating.

The crowd around the 17th green swelled on the natural amphitheater, eager to see their countrywomen secure the third point of the morning. They were not disappointed. Kupcho rolled in a long birdie putt to seal the match, and the decibels reached their peak.

“Whenever we can get the crowd on our side, it’s such an amazing feeling,” Salas said. “I think that’s what really helped us turn that board into seeing some more red. Obviously it’s a team effort, but these fans really pulled us together this morning.”

With the Americans back in contention and just one point down, the grandstands around the 1st tee was packed to capacity 30 minutes before the afternoon session was slated to begin.

“It was quiet this morning,” said U.S. captain Pat Hurst. “Out there starting out there was a lot of blue on the board, but it’s all about the ending, and I saw a lot of red at the end, so that as what we wanted.”

The fans are back in it, and so is Team USA.