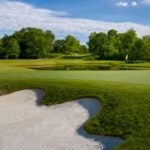 Bellerive Country Club in St. Louis is getting its first Presidents Cup.

One of golf’s biggest events is coming to the Midwest. The PGA Tour announced on Wednesday that Bellerive Country Club in St. Louis will host the 2030 Presidents Cup, which will be the 18th playing of the biennial event.

Bellerive Country Club has hosted U.S. Opens, PGA Championships and a U.S. Mid-Amateur. It most recently was the venue for the 2018 PGA Championship in which Brooks Koepka beat Tiger Woods by two to win his third major title.

“St. Louis is a passionate and iconic sports town and one which embraces teams and events such as the Presidents Cup with tremendous enthusiasm,” said PGA Tour Commissioner Jay Monahan in a release. “The combination of St. Louis and Bellerive Country Club will make for a memorable experience for fans onsite and those watching around the world.”

Bellerive will be the Presidents Cup’s seventh different U.S. venue. The most recent Presidents Cup was at Royal Melbourne in Australia in 2019. Woods was captain and led the U.S. to a 16–14 win over the Internationals.