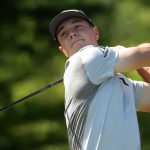 Viktor Hovland hits his tee shot on Thursday on the 7th hole at TPC Louisiana.

They played golf together while growing up in Norway. They played together in college. Team events come twice a year on the PGA Tour, but the co-leaders are plenty familiar with them. And each other. “I think just the mindset overall is just that we know each other pretty well and we’re comfortable around each other, so it was going to be a fun day no matter what,” one of the teammates said. “Obviously we played well today, but it’s always fun to play together, and we don’t get to do that very often in a tournament especially.” Here are three things you need to know after Thursday’s first round of the Zurich Classic at TPC Louisiana in Avondale, La.

Through their time as teammates on Norweigan junior teams and at Oklahoma State, Viktor Hovland and Kris Ventura estimated that they’ve played together a “couple 100” times. Thursday’s round was no doubt among their best.

One under through six holes, Hovland and Ventura played the final 12 at nine under for a 10-under 62 and a share of a one-shot lead with the team of Scott Stallings and Brice Garnett. One stroke back were seven teams in the four-ball (best ball) format. (The tournament alternates between four-ball and foursomes.)

“We played pretty similar the first six, seven holes, I’d say,” Hovland said. “Maybe we weren’t as close to the pin as we were on the back end of the round. Kris certainly hit some shots pretty close and I hit some shots pretty close and made some easy birdies, but yeah, towards the back nine there, Kris really started making some putts, and that’s just kind of — you know, it’s not a big difference between how we play the front and the back, it’s just kind of you get it going and you try to take advantage of it.”

Where Hovland and Ventura played the back nine at six under, Stallings and Garnett did so on the front.

“It was nice we didn’t birdie the same hole ever, and that’s what you have to do,” Stallings said. “We did a great job of that today.”

Tony Finau-Cameron Champ team is one shot back

Among the seven teams one stroke back is the team of Tony Finau and Cameron Champ. Two of the longest hitters on Tour, who have dubbed themselves “Team Send It,” they played the back nine, their first nine, at five under and the front nine at four under.

Among the six teams two strokes back is the team of Xander Schauffele and Patrick Cantlay. The 2019 Presidents Cup team stars played the front nine, their second nine, at six under.

Thirteen teams are at seven under and three strokes back.

The team of Collin Morikawa and Matthew Wolff, one of the more higher-profile pairings, shot a two-under 70 and are tied for 70th, eight shots behind the leaders. They made four birdies, but bogeyed the par-3 3rd and the par-3 14th.