2021 Texas Open leaderboard: Is Jordan Spieth on the brink of a breakthrough win? 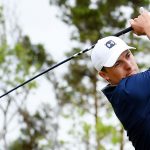 Jordan Spieth hits his tee shot on Saturday on the 5th hole at TPC San Antonio.

Jordan Spieth, starting in early February, was tied for the lead after three rounds at the Waste Management Phoenix Open, led by two shots entering the final round at the AT&T Pebble Beach Pro-Am and was two back of the lead after 54 holes at the Arnold Palmer Invitational at the start of March. At this week’s Valero Texas Open, he’s tied for the lead after the third round. Knock. Knock. Knock. And now knock again. Will this be the week that Spieth finally breaks through and wins for the first time since 2017? Here are three things you need to know after Saturday’s play at TPC San Antonio.

Jordan Spieth is tied for the lead

Spieth played his final 10 holes as well as he’s played over his two-month stretch.

“It’s about going out tomorrow and hoping that me and Wally can make a lot of birdies and come down the stretch on the last few holes and see what happens,” Spieth said. “Yeah, I feel good. It’s going to be fun, just try and have fun.”

“Thinking of the good and that was good today,” Wallace said. “Started off lovely, that settles you down. I felt nervous, but that’s a good thing because we haven’t been in that situation for a while, you know, with fans and being in Jordan’s home state. I definitely was probably third on the list of people rooting for out of the group. Hopefully I won over some fans there today. I’m very happy with today’s work.”

Charley Hoffman is two shots back

Two shots back of Spieth and Wallace is Charley Hoffman, who played his final seven holes at six under on his way to a seven-under 65, the day’s low round.

Cameron Tringale is four back of the lead, and Anirban Lahiri is five behind.

Among other players, Corey Conners, the defending champion, shot a four-under 67 and is eight shots behind the leaders, and Rickie Fowler shot a three-under 69 and is nine back.