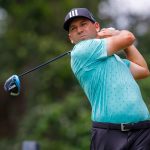 Sergio Garcia is seeking his second PGA Tour win of the season, and the 13th of his career.

The PGA Tour is back in Texas this week, at historic Colonial CC. There are plenty of big names in the field, including last week’s PGA champion, Phil Mickelson. Here are three things you need to know after Thursday’s first round of the Charles Schwab Challenge in Fort Worth, Texas.

Jordan Spieth and Sergio Garcia both fired bogey-free rounds of seven-under 63 on Thursday to lead the field by two shots. Spieth is seeking his 13th career Tour victory, while Garcia is seeking his 12th. Both players are experiencing a bit of a career resurgence over the past several months, with Garcia claiming the Sanderson Farms Championship in October — his first PGA Tour victory since his 2017 Masters win — and Spieth winning the Valero Texas Open in April, which was his first victory since the 2017 Travelers Championship.

Despite becoming the oldest player ever to win a major championship (the sixth of his career) at the PGA over the weekend, Mickelson honored his commitment to play in this week’s Charles Schwab Challenge. His performance wasn’t quite as dazzling at what was on display at Kiawah’s Ocean course, though, as he signed for a round of three-over 73 — 10 shots off the pace and currently T87. While Mickelson didn’t suffer any disasters during the first round, he did make five bogeys and only two birdies on the day.

Other big names in the mix

Chasing Spieth and Garcia’s lead is a handful of big names: Brandt Snedeker (-4) is three back, and Ian Poulter, Patrick Reed, Justin Rose and Daniel Berger (-2) trail by five. Also in the mix: Joaquin Niemann, Will Zalatoris, Tony Finau, Kevin Kisner and Collin Morikawa, who are all one-under.