11 things you absolutely must do before, during and after playing a bucket-list course

Your lottery ticket has hit — you’re finally getting to tackle the bucket list course of your daydreams. Don’t let the occasion overwhelm you, though. Come prepared. Here are 11 tips to help you get the most out of your big day.

1. STUDY UP — Dabble in a bit of pre-round research, but don’t overdo it. It definitely adds to the pleasure of a round to know which holes are acknowledged as design gems and where significant historical events have occurred. Merion’s East course certainly has stronger, more architecturally prominent holes than the 367-yard, par-4 11th, but that’s the hole where Bobby Jones clinched the Grand Slam in 1930, so it’s one you want to be aware of and hopefully play it well.

As pumped up as I’ve been, I’ve made 7, 6, 4 and 5 in four trips around it. Obviously, I’m no Bobby Jones. It’s wise to get a few tips on how to play certain holes and to know something of the course characteristics, but I wouldn’t prepare as if you’re sitting for a bar exam. Let the course unfold organically. If you’re over-thinking, tension will creep in. It’s like unwrapping one present at a time. Leave some room to be surprised.

2. SHAPE UP — Have your game in shape before you arrive. That doesn’t mean you to need to crank out 36 holes a day for a week straight before your bucket-list game. Instead, get in nine or 18 holes, or a lengthy practice session as close to the big day as possible.

You’ll want those positive muscle memories in place, for full swings and touch shots, to combat the inevitable nervous energy you’ll be experiencing. The goal is to be able to relax, pull the trigger and soak in the course, which is something very hard to do when you’re wasting thoughts and energy on swing technique and basic ball contact. 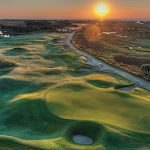 3. LOOK IT UP — The last thing in the world you want to do on the day of your bucket-list game is to arrive late and stressed. Some of the more reclusive private clubs can be hard to find, even with today’s sophisticated GPS. Know where you’re going before you depart your house or hotel. Yale, Yeamans Hall and France’s Morfontaine are three Top 100s that I don’t think I would have found without divine intervention.

4. DRESS IT UP — If you’re on your way to a locked-gate paradise, check with your host or with the club as to what to wear. These days, they’re few and far between, but there are still clubs that require jackets in the clubhouse and trousers on the course. On my one overnight at Cypress Point in 2012, I had to don a blazer even for breakfast. Of course, for the views we enjoyed, I would have suited up in armor if necessary.

5. SOAK IT UP — Arrive at your bucket-list course early — very early — but not too early. You want to acclimate yourself to surroundings that you’ve eagerly waited to experience, get comfortable with the unfamiliarity, and bask in the ambience.

Learn the lay of the land, where you need to be to change, dine and take care of the basics, from green fees to caddie arrangements. Avoid at all costs the feeling of being rushed. Save your shopping and heavy exploring until after the round — unless there’s no afterparty. For now, breathe in the aura of your bucket-list course but focus on your golf game.

Arrive in plenty of time to warm up, with full swings and short shots and don’t neglect a substantial session on the practice green. When I won the media lottery to play Augusta National on the Monday following the 1993 Masters, I darted around like a firefly trying to take it all in before the round and lost track of my tee time. All I could squeeze in were three nine-irons and then it was off to the tee. No wonder I doubled my opening hole. An hour-and-a-half should be plenty of advance time, unless there’s a meal involved. Get to your destination too early, however, and the adrenaline rush may wear off earlier than you want it to.

Or you could face the fate that befell Tiger Woods during his first trip to Seminole. His member-host hadn’t arrived yet, so Tiger had to remain in the parking lot. “Couldn’t I just hit some putts?” asked Tiger. Not a chance.

6. LIGHTEN UP — Bummed that you’re timing’s off, you’re missing shots and putts, the weather’s turning lousy? Relax. You should start your round with diminished expectations about your own performance and instead hone in on the golf course itself, the stunning scenery, the compelling design.

Savor the good shots and low scores that will come, whether on three holes, six, or all 18. My most recent round at the Old Course at St. Andrews found me two-over after 12, and then a storm blew in and I skied to an 87. But I prioritized. I had birdied the legendary Eden Hole, the par-3 11th, where Bobby Jones had ripped up his scorecard and walked in during his first appearance there in 1921. That was enough to sustain my positive vibe.

You can pick several holes where you really bear down — but either way, relax, relax, relax. I was so nervous at some of my early bucket list excursions the tension just crushed me. I found that keeping a miniature bottle of booze in the bag, and partaking would invariably wash the tightness away.

7. BELLY UP — As much as you’re trying to bottle up the course experience, it’s impossible to separate the club experience from your overall enjoyment. If there’s a halfway house, especially one with a notable food or beverage item, try it. It goes a long way toward a lifetime of memories and stories. I’d tell you about the oatmeal raisin cookie I feasted on at Pebble Beach, except that a seagull snagged it from my cart before I had even unwrapped it. Next time, I walked — and no cookies.

8. SNAP IT UP — Yes, we live in a world now where you must take photos and film video of every shot on every hole to prove you were actually there. I wish it were otherwise. My advice is to take a few select photos at the most scenic holes, or the most famous holes, or at the holes where you accomplished something stupendous. It may be corny or clichéd in the moment, but you’ll be grateful that you did. Beyond those moments, put the iPhone away for awhile. Look at those glorious golf holes. Smell the fragrant pines and the salty seabreeze. Touch the perfectly groomed grass. Take the time to savor this special round, but…

9. KEEP UP — As enticing it as it is to linger over every aspect of your bucket-list course, don’t bring play to a halt. Playing quickly helps the rhythm of your own swing, which should lead to lower scores, and you don’t want to ruin the experience for your playing partners or the folks behind you by being a slowpoke. 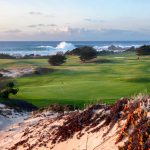 You may also like Breezin’: Three seaside golf courses you can play for under $100

10. PAY UP — You’ve finished your round, and retail therapy awaits in the pro shop. Now is not the time for frugality. Did you have a great time? Do want to share your stories with close friends and total strangers? Spring for a golf shirt. The logoed shirt is the ultimate conversation starter. I’ve engaged for three and a half decades.

I recall being in Las Vegas in 1992 wearing an Innisbrook shirt and having a Royal Montreal member come up and start conversing. He had taken lessons on vacation at Innisbrook. Great guy. I also wore a Cypress Point sweater as a young guy and had my college roommate’s sister ask if that was a cemetery.

Still, as a perfect, functional reminder of a favorite round, go for the logo shirt. Hats are also a solid, and less expensive souvenir — shoot, if you feel happy, get both shirt and hat. If you’re looking to share your good fortune with others, plastic logo ball markers make a nice gift, and the fancy metal ones are a step up for that special someone. For your intensely jealous golf buddy? A shirt might be a bit extravagant. A logo golf ball would take care of it.

11. EAT IT UP — Why the rush to clear out? Partake in a meal if you can. Order the club’s signature dish or drink. Stroll the hallways and take in the old photos and ancient trophies. I could have spent half a day wandering around Oakmont’s many memorabilia-filled rooms. It was the like at the USGA Museum, with a Top 10 golf course. You live for these days. Linger a little longer.