The Etiquetteist: When and where on the golf course is it OK to take, um…relief? 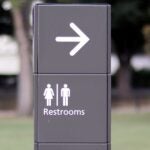 Can't hold it? Now what?

The other day Twitter user @TwoInchesShort shared a photo of a sign at a municipal course that was cracking down on golfers taking relief.

The course wanted that relief to occur in restrooms only.

“Don’t get caught with your pants down!!” read the notice, which warned that anyone treating the property as an outdoor urinal would be prosecuted.

But in the halls of Etiquetteist HQ, it was cause for reflection.

What’s the etiquette around this form of on-course irrigation?

If no indoor facility is readily available, is it acceptable to employ your personal sprinkler system?

In most municipalities, doing so in public is considered a public nuisance, and it can carry misdemeanor charges. But few courses make a stink about it. Some even invite the practice with good cheer.

“Please, help yourself to any tree!” the member at a prestigious club once told The Etiquetteist, with the welcoming wave of a restaurateur directing a customer toward the buffet.

Note: The Etiquetteist had inquired about club policies before letting fly. That’s obligatory at a private course, no different than educating yourself on the dress code before showing up on the first tee. The polite way to phrase your question is by asking where you might find the nearest restroom. In most cases, your host will tell you that any oak or pine will do. But should they say, “There’s one at the turn,” that’s your cue that you should wait.

No matter where you are, abide by common sense: never into the wind, never in the corridors of play (no matter how good the drainage) and always as discreetly as possible. Try to stay out of view. Don’t make a scene. Hold off on commentary before and after. As with intimate relations between grandparents, everybody knows that these things happen from time to time, but no one needs to hear about them.

Oh, and not in someone’s yard. The entire world is not your oyster, or your outhouse. The golden rule applies here, in more ways than one.

Otherwise, though, there aren’t many strictures.

Given the preponderance of aging prostates in the game, golf’s relatively lax stance on this unsurprising. But it’s not gender specific. The same degree of forgiveness applies to women, too. Want to be like the guys, ladies? Have at it.

That said, The Etiquetteist has a female golf pal who would never take advantage of this kind of freedom. She regards it as unhygienic. In her view, in fact, the only disagreeable part of playing golf with guys is having to shake hands on the 18th, knowing what has transpired during the round. It’s a valid point, and it brings up another etiquette commandment: Along with a towel, some tees and an extra sleeve of balls, pack your bag with a tube of Purell.

PGA Championship picks to win: Here’s who our staff is betting on at Southern Hills