What it’s like working on the Masters grounds crew, according to a superintendent who has done it 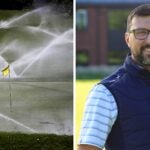 Among the top priorities for the Augusta crew: getting — and keeping — the greens in optimal condition.

Ed. note: Just as Augusta National is the ultimate insiders’ club, the Masters is the ultimate insiders’ tournament. Nearly nine decades after the storied venue was founded, the Augusta Experience has remained shrouded in mystery. To unlock some of its secrets, we asked those who have been part of the experience to describe one element of what makes Augusta Augusta and the Masters the Masters. The third installment of our “What It’s Like…” series (below) was contributed by a superintendent who agreed to participate only if he remained anonymous.

For several years, I worked on the volunteer grounds crew at Augusta National, one of about 100 superintendents who wing in from around the country to help during Masters week. Unlike most unpaid jobs, it’s not an easy gig to get. You write a letter, and there’s a waiting list. If they think you’re up to snuff, they put you in the bullpen in case a spot opens.

I’ve worked multiple U.S. and British Opens too, and I would say that Augusta has about double the manpower and maintenance fleet of those events. I worked fairway duty, part of a fleet of 14 mowers. To put that in perspective, most top-shelf clubs use two mowers. Starting early in the morning, we’d mow the driving range and the chipping area, then we’d split into two teams, one for each nine, and mow the fairways in an offset conga-line formation.

To help ensure that everything went just right, inside each mower, they had a slit tennis ball dangling on a string from the roof of the cabin, so that the tennis ball was hanging near your lap. If you saw any problems with the mower just ahead of you, you were supposed to toss the tennis ball out the window to alert the other drivers. I never had reason to toss a tennis ball myself.

But one morning, as we’re mowing the second fairway, I saw a tennis ball come bounding across the fairway up ahead. We all immediately came to a stop and pulled off the fairway. It turned out that a pinecone had gotten caught in one of the mowers, and it was causing tiny gouge marks in the fairways. The damage was so minor, you could barely see it. But that was enough to bring everything to a temporary halt. By the next day, the tiny gouge marks were gone. They took care of them, quick.

Another thing about the mowing is that they have you go in just one direction, from green to tee. That’s mostly for presentation. They want a uniform look, without stripes. Some people also say that mowing the grass against the direction of play minimizes rollout. But I’m not sure that makes a difference, given how tight they cut those fairways.

How low do they go? I once asked my supervisor, and he said he could only tell me that they had the knife beds set to a quarter inch. That’s extremely short, maybe twice as low as the average course.

“So, we’re mowing to a quarter inch?” I asked incredulously.

“I didn’t say that,” my supervisor replied, with a wink.

At Augusta, they play everything close to the vest, and they keep everything they can out of sight. Their pump station is massive, and it’s underground. That’s unusual. And they have a backup system just like it.

But they’re probably most secret about the greens. In my stints there, only full-time staffers and interns got to work them, and when they talked about the greens over the radio, they used code. One time I was in the maintenance shop and an assistant walked through. He was wearing an earpiece, but it somehow got unplugged so we could hear what was being said. The 8th green needed “a procedure.”

I wondered what that meant. The maintenance building is close to the 8th green, so I walked out for a look. It turned out the green needed what’s known as an Augusta double-cut, where they mow back and forth over the exact same path. Two guys do the double cutting, each mowing twice over the same area, which means they’re basically cutting the green four times. They want the putting surfaces running at “championship speed.”

They won’t tell you how fast they stimp, but one year, during volunteer week, when they let you play the course, I put a stimpmeter in my bag. I knew I couldn’t let anyone see me, so I had to wait for an opportunity. Finally, when we got to the 15th green and it looked like no one else was around, I went to a relatively level area at the back left of the green. It was stimping at 14. And that’s during volunteer week!

Just as I got the reading, I noticed that a bunch of other supers in other groups were watching and heading over toward me. They weren’t mad. They were curious. I didn’t get reported. Otherwise, no way I would have been invited back.

With reporting by Josh Sens.