Secrets of the Augusta National grounds crew: What it takes to get the course Masters-ready 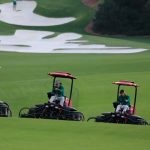 The fairways at Augusta National are cut in one direction, usually from green to tee.

If you think getting on the grounds of Augusta National is tough, try getting the scoop on how those grounds are maintained. As with so much else around the home of the Masters, turf care practices are cloaked in secrecy. Anyone who has ever cut a cup or pushed a mower on the famous course is asked to swear a vow of silence, and most stick to it for fear of not being invited back.

Over the years, some information has been made public; verifying it is another matter. On a quest to separate fact from fiction, we contacted a handful of agronomic experts who know their way around Augusta.

Here’s what they could — and couldn’t — tell us about what it takes to whip the course into tournament shape.

No sooner does one Masters end then planning for the next Masters begins. In late spring, the course closes and many of the greens (depending on their slope and the amount of natural shade they get) are covered with elevated tarps that let sunlight in while protecting the grass from the fiercest heat of summer. As temperatures climb, the cool-season ryegrass in the fairways fades, leaving only warm-season Bermuda.

Things remain that way until the fall when the rye is reintroduced by way of overseeding. Fall is also when the course reopens to members and their guests, so they’ve got that going for them. Though course conditions are never scruffy, it isn’t until later winter or early spring (weather and soil temperatures influence the timing) that maintenance ramps up to yet another level, and Augusta morphs into the Shangri-La that the rest of us see on TV.

Already staffed with top-shelf talent, Augusta National’s year-round crew gets reinforcements during tournament week from a volunteer All-Star team of superintendents from around the country. Some even wing in from overseas.

While all the majors bring in extra hands, no event draws more expert interest than the Masters. And no club is as granular in its demands. Each volunteer is assigned a specific task or a specific hole, often with no other obligation. One seasoned superintendent told of spending most of Masters week by the 2nd green, where he was entrusted with nothing more — but also nothing less — than whisking sand off the putting surface.

The club likes its fairways as it likes its blazers: solid green. No vertical striping or crisscross mowing patterns. The fairways are cut in one direction, usually from green to tee (though sometimes the club opts to mow from tee to green instead, a former ANGC grounds crew member said). The result is a uniformly verdant look.

Over the years, some pundits have suggested that green-to-tee mowing helps defend the course against long-bombers by getting the grass to lay against the direction of play, thereby limiting roll. But this is largely a myth; the matter has been studied, and the mowing patterns on ryegrass have been shown to have negligible impact on how far a ball rolls.

Where green-to-tee mowing patterns do make a difference, one Augusta insider said, is on approach shots and chips: “When that grass is growing against you, it’s just a little tougher. You really have to be precise if you want to catch it clean.”

How fast, exactly, are the greens at Augusta? Don’t ask. No one is going to tell. What’s more, not everybody knows. Even members of the grounds crew are often left in the dark, said one former Augusta staffer.

“If I had to guess, I’d say they’re anywhere from 12 to 14 on the Stimp,” another Augusta insider said.

More to the point, not all greens are cut to the same height or with the same frequency. Each receives customized treatment according to such factors as their contour and shading as well as the amount of moisture in their soil.

You’ve probably heard of Augusta’s SubAir system, the elaborate underground network of pumps and pipes that helps control the speed and firmness of the greens. The technology was conceived in the early 1990s by longtime Augusta superintendent Marsh Benson, but it isn’t the club’s only homegrown innovation.

Over the years, the club’s maintenance crew also developed a special mower that can cut at different heights in a single pass, “basically by just making one side of the mower lower the other,” one industry veteran said. “Probably anyone could do it,” the industry veteran added, but this mower is particular to Augusta. It is unavailable on the commercial market.

The club uses it to create graduated heights that prevent a ball from getting hung up between the collar and the surrounding grass.

6. Mowing patterns on the greens

The “double freakie” is not the latest dance crazy. It’s a term sometimes applied to the mowing pattern that Augusta employs on its greens, which involves two passes in opposite directions over the same line, as another mower works perpendicular to that line in a kind of double crisscross. Despite the unusual name, the mowing pattern itself is not unique. Plenty of places use it. What is unusual is the amount interest it attracts during tournament week.

“I remember seeing so many people around the greens, it was like parting the Red Sea just for me to get out there with my mower,” one Augusta grounds crew veteran said. “Then I’m out there cutting crass with 300 people watching me, and I’m thinking, ‘Since when do greenkeepers get a gallery?’”

Over the course of a busy tournament week, trampled footpaths form from pedestrian traffic. To help that battered turf recover, the club scatters rye seed over that worn out ground, often on Saturday evening, before the final round.

“It’s a good way to get that soil-seed contact,” an Augusta grounds crew veteran said. “As the patrons walk across them, those seeds are getting pushed into the ground.”

8. Ice on the azaleas and other myths

Work enough tournament weeks on the grounds crew and you hear some stories. Like the one about the club putting ice on the azaleas before the Masters to prevent them blooming prematurely.

“I can’t tell you how many times I heard that story repeated,” said a grounds crew veteran. They don’t import azaleas at the last minute either, the veteran said. “It’s all up to mother nature,” he says. “Some years, you just don’t have the same amount of bloom.”

So it goes at a place that’s so revered; people grow convinced that the grounds are otherworldly. “Another one I used to hear was, ‘Look, there’s not a single weed out there,’” the veteran said. “And I remember thinking, ‘Well, actually there IS some poa in those fairways. Not a lot. But if you look real close, you’ll see a bit of poa.”

Look even closer still, and you might even see some bare spots. Hate to spoil the fantasy, but it’s still a golf course.

“It’s like one of my first bosses told me,” the veteran said. “If you work in the business long enough, it doesn’t matter how talented you are or how many resources you have, at some point, you’re going to lose some grass.”