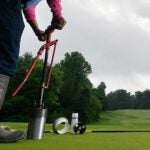 There is no such thing as “illegal” hole locations, but there certainly are good ones and bad ones.

The golden rule of real estate is also a key consideration for golf-course superintendents.

After all, where supers choose to cut their holes, and how often they cut them, can have a profound impact on everything from course difficulty and conditioning to pace of play.

So, what goes into their decisions?

Matt Guilfoil, superintendent of Desert Canyon Golf Course, in Phoenix, and co-host of From the Jingweeds, a podcast devoted to the turf-care trade, takes us through the calculus.

Changing hole locations regularly is important, not only for variety and player enjoyment but also to preserve the health of the greens.

“If you get golfers trampling over and over around the same spot, they really do a number on that part of the green,” Guilfoil says. “Plus, the cup itself gets beat up from so many people reaching their hands into it.” (Or even more damaging, using their putter to retrieve the ball from the cup).

No wonder high-end courses, both public and private, tend to cut new pin positions every morning. At many other properties, though, the frequency depends on a range of factors, including maintenance budgets, turf type and time of year. From early fall, when he overseeds, through June 1, Guilfoil cuts new holes at Desert Canyon every morning. But come summer, he takes Tuesdays and Thursdays off.

That’s partly because the volume of play is down, so his greens aren’t getting as much wear and tear. But it’s also a matter of maximizing labor; it takes about four hours for one of his employees to cut new cups (while also setting the tee markers), and sometimes, Guilfoil says, “I’d just rather have that employee use those four hours to do something else.”

Just as golfers have pin sheets, so, too, do superintendents. Many split their greens into numerical sections, which they rotate through from one day to the next.

At Desert Canyon, Guilfoil relies on a what he calls a “modified 1, 2, 3 system” that works in accordance to the shape of each green. If the green is long and narrow, the numbers refer to “front, back and middle.”

If the green is wide and shallow, the numbers refer to left, middle and right. By progressing through the sections, Guilfoil ensures that no single section of any green absorbs too much wear and tear.

Factoring in contours and collars

Contrary to a common misperception, there is no such thing as “illegal” hole locations (anywhere on the putting surface is allowed). But there certainly are good ones and bad ones.

In the spirit of fairness, Guilfoil always cuts his cups at least one flagstick-length away from the collar, never any closer. Nor does he want a cup cut on a portion of the green with too much slope. How much slope is too much slope? As a rule of thumb, Guilfoil instructs his staff to straddle the hole with their feet and then a drop a ball, at arm’s length, from where they’re standing. If the ball rolls away when it hits the ground, that pin position sits on too much contour. Time to find a flatter spot.

Difficult pin positions can be perfectly fair positions. But Guilfoil avoids them on weekends and holidays, when the course is especially busy. “Otherwise, you’re looking at a nightmare in terms of pace of play,” he says.

Green speed is also a factor. The same pin position that works on shaggy putting surface can be too extreme when the greens are running lickety-split. “We like to get our greens running fast,” Guilfoil says. “But you’ve got to be careful. Let’s say you get a sudden cold snap, and the grass goes dormant, and just like that the greens are super-quick and hard as a rock. Now that same pin position you thought you had is suddenly impossible.”

Every time you cut a new hole, you’ve got to fill the old one. And while the task isn’t brain surgery, it calls for care. If you leave the replacement plug too high, Guilfoils says, the mower will scalp the grass, leaving a bare, circular patch in the putting surface. Conversely, if you set the plug too low, the grass will grow longer, creating a darker discoloration circle that also runs at a different pace than the rest of the green.

On putting surfaces with a lot of grain, replacing the plug in the same orientation that it was cut is also important; otherwise, the grass inside that circle will grow in a different direction than the surrounding turf (a blemish that shows up as little smiley-faces on the green).

At a high-end club where Guilfoil used to work, the staff attached compasses to their hole-cutters to ensure that they replaced plugs in the proper position. At Desert Canyon, Guilfoil doesn’t have that luxury, so he relies on a bootstrapping method. Whenever he cuts a hole, he finds a tree as a reference point. “And then it’s time to replace it, I know I have to have the plug positioned in the same relation to that tree,” he says.

You can’t please all the people all the time. Just ask your local golf course superintendent.

“No matter where I cut the holes,” Guilfoil says, “I can pretty much count on someone coming up to me at some point in the day and saying, ‘Hey, why the hell did you put that hole there?’”

GOLF Spring/Summer 2021 Style Guide: The best looks for your game