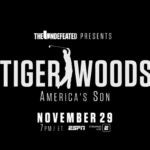 The November Masters has concluded and golfers are putting away their clubs for winter, which means we now enter a new part of the golf season: the Tiger Woods documentary system.

The man who ignited so many golfers’ love for the game when he burst onto the professional scene in 1996 has two documentaries coming out in the coming months, and over the past week, we’ve gotten first-look trailers for each of them.

The trailer for HBO’s two-part “Tiger” documentary, which launches in 2021, dropped during the 2020 Masters last week. If the teaser is any indication, the biography focuses on Tiger’s relationship with his father, Earl, and hints at his subsequent fall from grace following Earl’s passing.

But there’ll be another Tiger Woods documentary hitting the airwaves before that. ESPN’s The Undefeated drops its “Tiger Woods: America’s Son” next Sunday at 7 p.m. ET, and today we got a look at the trailer for it.

By the looks of this trailer, the documentary will explore American society’s complex relationship with race, and Tiger’s role within it as an sports icon.

Two documentaries, each guaranteed to be enlightening in its own way. Time to mark ’em on your calendars!