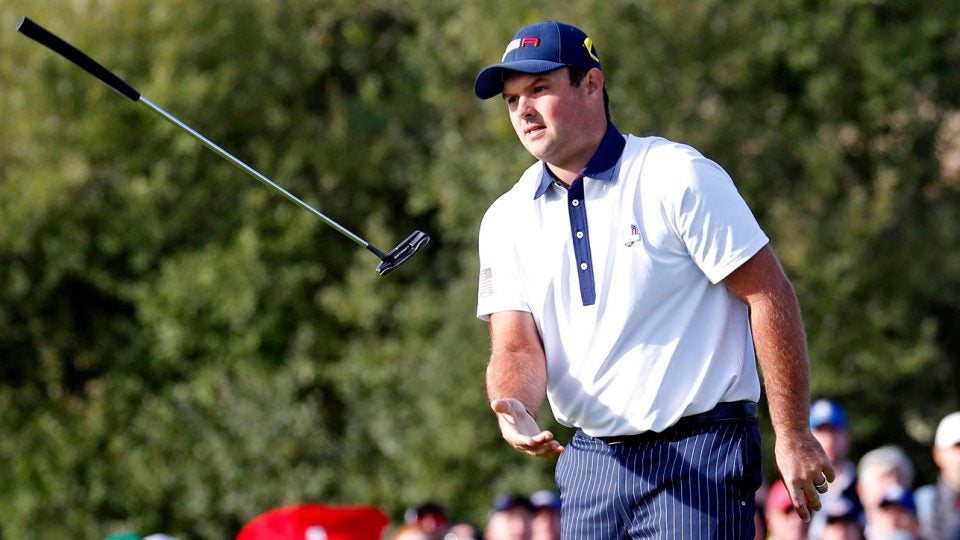 Patrick Reed said he was not involved in a decision about pairings.

Contrary to popular belief, turkey wasn’t part of the first Thanksgiving feast. But that was centuries ago, and the bird is now a staple. We serve it every year in a banquet of dubious honors for the most egregious gaffes and goofs over the past 12 months in golf. Gather ’round the table, friends, and dig into our 2018 Turkey Awards.

The Pepé le Pew Award for Stinking up Paris

After a fetid Ryder Cup performance at Le Golf Nacional, Reed further befouled the atmosphere outside Paris by blaming others for his poor showing. Frustrated? Fair enough. But in his petulance, Captain America came off more as a self-pitying villain than the hero we’d been hoping for.

“You’re undermining the people who care about the game. And you’re acting like an ass. I’m stunned. Stop,” former Golf Channel personality Kessler tweeted at current Golf Channel personality Brandel Chamblee, over a topic so innocuous it’s hard to remember. That was only one of many surly social media communiques from Kessler, who found time to take aim at a range of targets, from a No Laying Up trailer (“That was certainly one of the worst things ever presented”) to Ian Poulter (“I have the same number of majors and one less US stroke play event than Ian.”) Unafraid of conflict, Poulter shot back, “Why so bitter in your old age? Is this what I have to look forward to when I become irrelevant?”

Needing birdie to hold onto the faintest hope at the claret jug, Tiger Woods had just coiled into his backswing on the 18th at Carnoustie when the silence was shattered by a flinch-inducing shout. “What are you doing?” Woods asked, despairingly, slumping his shoulders through an awkward finish. There was no good answer. And no doubting this fact: for all the talk of differences between fan bases, numbnuts are populous on both sides of the pond.

In the span of a lifetime, four minutes isn’t much. But from the fairway of a par-five, it’s pretty much forever. Which is how long Holmes took over his second shot on the closing hole at Torrey Pines, an agonizing lag that left his playing partner, Alex Noren, in the lurch with the Farmers Insurance Open hanging in the balance. To make matters worse, Holmes, who was two shots off the lead, finally put an end to his human rain delay by laying up into the rough.

You know that irony is dead when a player takes the mic at a crowded press conference, as Koepka did before the British Open, and complains that no one gives him the time of day.

It was hard to feel less sorry for the reigning Masters champ, who received free tickets to sold-out Fenway Park and still saw fit to tweet out a complaint about his seats.

The That-Ain’t-Your-Job-Award for Executive Overreach

Ruffled by a spectator who was openly rooting against him at the Honda Classic, Thomas called to have the man ejected— an excessive move for which JT later apologized.

After collapsing down the stretch of the Porsche European Open, the devoted tinkerer became an irritable toddler, all but blowing off winner Richard McEvoy with a bad-attitude handshake that rightly earned him rebukes in the Twittersphere.

In an incident as sad as it was strange, Yue-Guey Lin was identified as the spectator who kicked an O.B. tee-shot back in bounds at the LGPA’s qualifying tournament at Pinehurst. The ball belonged to Lin’s daughter, Doris Chen, who was advised of the infraction but still played her next shot without consulting with a rules official. She was later disqualified.

“Doris did the wrong thing,” Chen’s caddie, Alex Valer, acknowledged later, echoing the feelings of most everyone in golf.

It was de ja vu all over again for Thompson, who, still living with the memory of a disastrous rules kerfuffle at the 2017 ANA Inspiration, racked up more infractions in 2018—first for moving a sign at the Honda LPGA Thailand, and then for wrongly lifting and cleaning her ball at an Indian event. Thompson is lucky that one of golf’s rules isn’t “three strikes and you’re out.”

In a move that reinforced the ugliest stereotypes in the game, the owners of this Pennsylvania course called the cops on a group of African-American women golfers after telling them that they were playing too slowly.

Golf shot or money shot? Fans were left to wonder during the network’s coverage of the second round of the US Open, when commentary from the tower gave way seamlessly to graphic audio of a guy telling his buddy of a sexual escapade. What’s he got from there, Johnny? Believe us, You don’t wanna know.

The “Wait, Isn’t This Black-Friday?” Award for Post-Thanksgiving Price Gouging

Winner: the organizers of the Phil-Tiger match

On a day when almost everything goes on sale, the power-brokers behind this holiday confection have opted to put the squeeze on consumers, turning the Phil vs. Tiger tete-a-tete into a pay-per-view event.

No matter one’s political affiliation, it was disconcerting to discover that the leader of the free world had somehow managed to leave his cell phone behind on his golf cart.

As if his putting-a-moving-ball breach at the U.S. Open weren’t embarrassing enough, Mickelson made a further mockery of matters with a smarter-than-thou but disingenuous-sounding explanation (“It was meant to take advantage of the rules as best you can.”) It was conduct unbecoming of a star whom most everyone would love to see win the event.