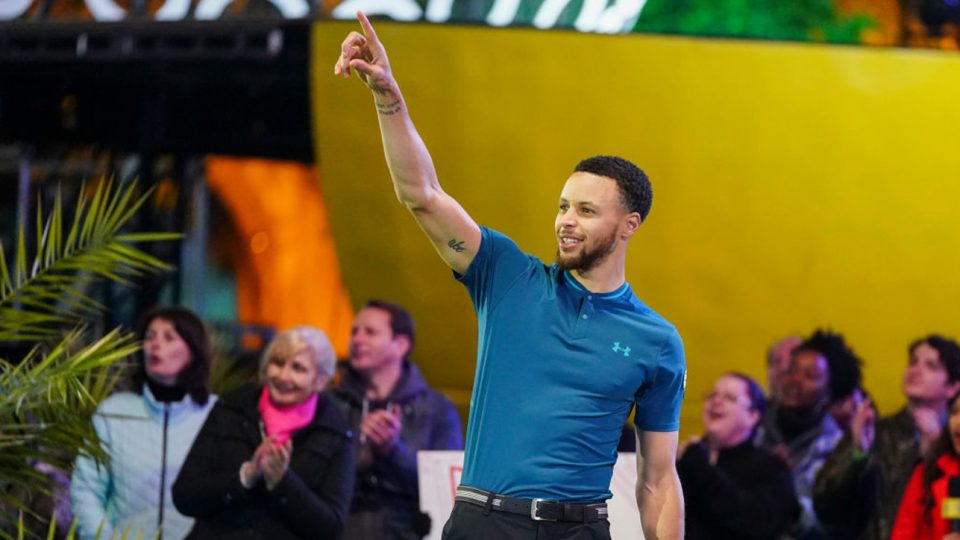 Summer is here. Long days. Hot nights. Lots of idle hours and healthy brain cells to kill. What would we do without network television?

More to the point, what would we do without a prime-time confection like Holey Moley, which premiered last Thursday on ABC, belching out onto the airwaves a miniature golf-themed reality TV show of mind-numbing inanity, with Stephen Curry as kinda, sorta participant and host?

Actually, we might do a lot of things. We might read a book. Or study a foreign language. But who are we kidding? Let’s prop our eyelids open, stare blankly at our screens and let the assault on our intellect begin.

Like countless reality TV shows before it, Holey Moley is structured as a loony competition, populated by contestants with a near-boundless appetite for personal debasement. Its venue is a 10-hole, technicolor miniature golf course that looks like something you might get if Mickey Mouse interned with Tom Fazio then sat down at a drafting board while high on ‘shrooms. Familiar mini golf obstacles come into play in outsize dimension — giant windmills, water hazards, wavy slides and such — the difference being that they’re meant to obstruct golfers as well as golf balls. After striking their putts, players are required to navigate the course themselves, a perilous journey that yields all manner of Three Stooges-esque pratfalls. Competitors face-plant on slides and kerplunk into pools. A woman gets walloped, not once but twice, by a spinning windmill blade. Imagine the lovechild of American Ninja Warrior and The Big Break, then make it three times more ridiculous than anything you thought possible, and you still haven’t arrived at an accurate mental picture of just how silly it all is. 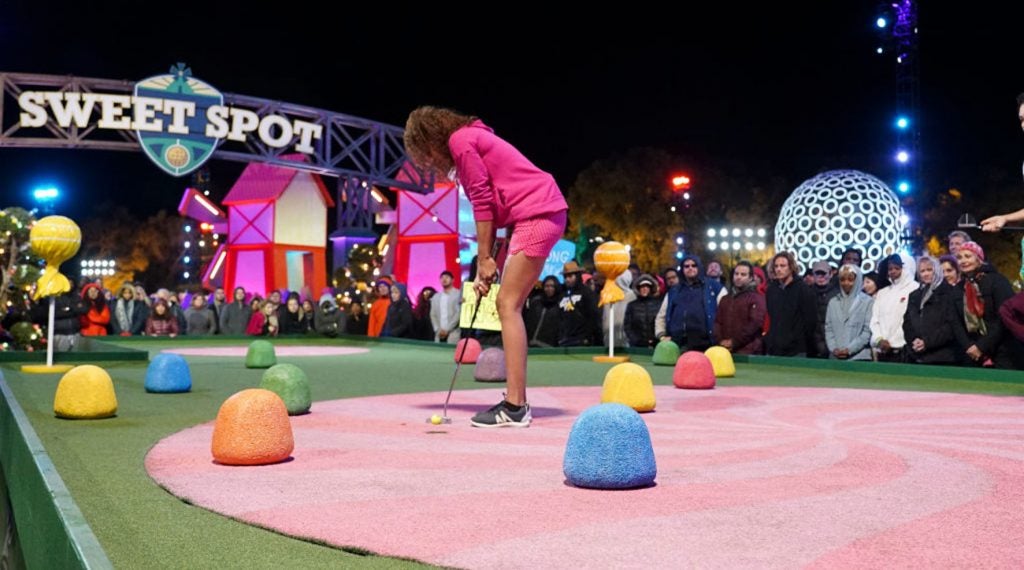 The setup on the show is pretty crazy and wacky.
Getty Images

For play-by-play and color commentary, Holey Moley gives us Monday Night Football broadcaster Joe Tessitore and comedian Rob Riggle, both doing an over-the-top-announcer shtick while wearing baby-poop-yellow blazers in the throwback style of Howard Cosell and Jim McKay. Their retro dress and tongue-in-cheek deliveries reinforce something that should already be plain: Holey Moley is meant as camp, its schlockiness so exaggerated that it seems designed to function as a form of self-defense.

We know what you might be thinking: How can you criticize a show that admits from the start that it’s just joking around?

The problem with Holey Moley is that its jokes aren’t funny, unless grade-school slapstick is your thing. Throw in canned one-liners (“I’ve seen old Chevy Novas take less punishment in a demolition derby,” Riggle cracks after a competitor absorbs a second windmill whack) and what comes through most clearly is the lazy cynicism of the whole affair. 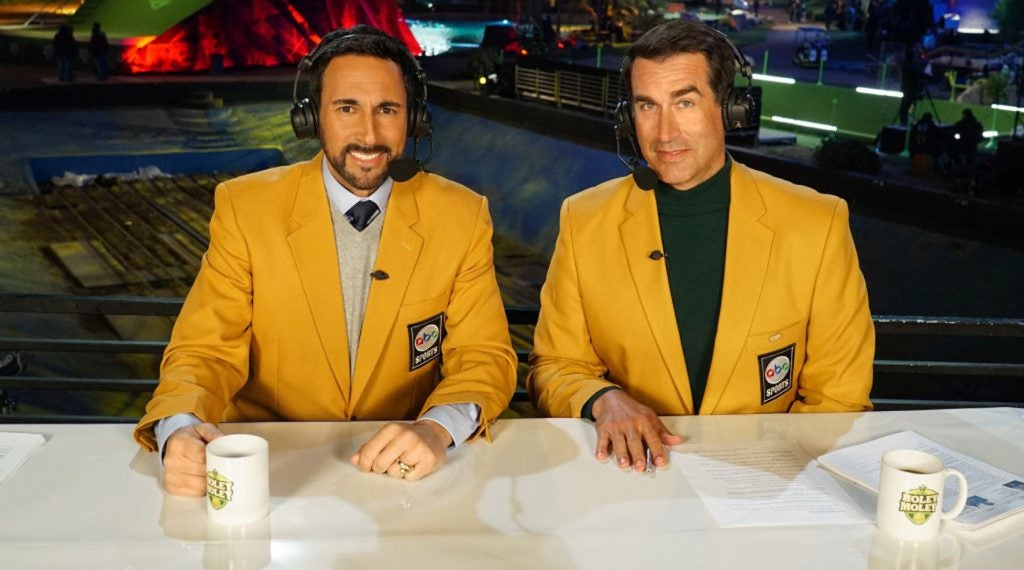 Joe Tessitore and Rob Riggle are unimpressive in the broadcast booth on the show.
Getty Images

What’s with the contestants and their outfits? Why is one guy dressed as a powder-blue unicorn while another masquerades as a lumberjack? Are they off their meds? Or rejects from a Village People tribute band?

Speaking of drugs, is that a hallucination or is it Kenny G? It is! In a saxophone-blowing cameo that makes you glad you’re not at one of his concerts. 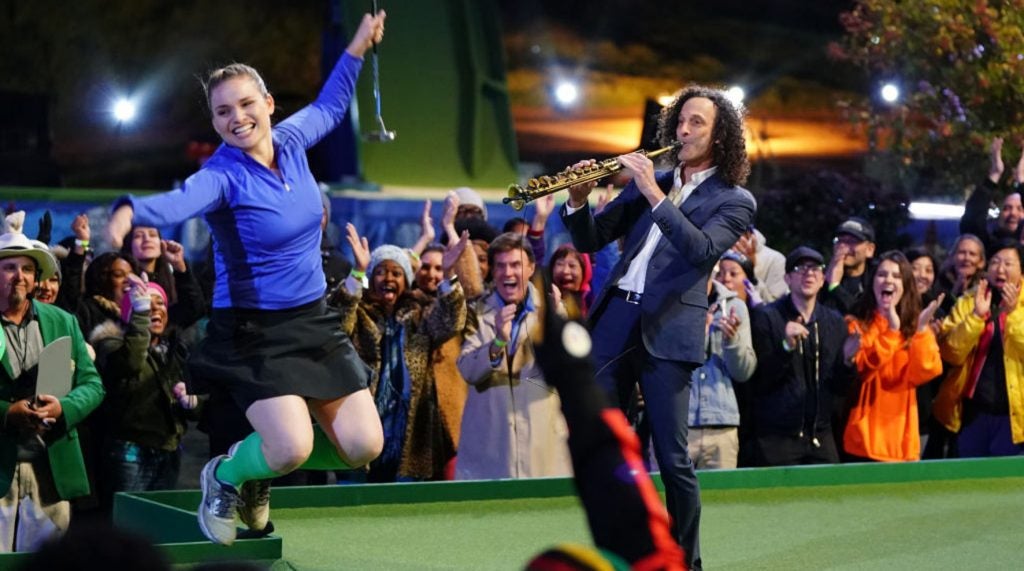 In the midst of the chaos, there is also Curry, a global superstar with Everyman appeal, knee-deep in an otherwise B-list production. In addition to serving as a co-producer of Holey Moley, Curry takes several larkish turns on camera, introducing the action; competing against a robot in a mid-round chip off; and presiding over a closing ceremony in which the winner receives a golden putter, a cheesy plaid jacket and a check for $25,000.

Delivering his lines in an arch tone suited to the cartoonish proceedings, Curry is a bright spot on Holey Moley, but even his likable presence is not enough to salvage a show this vapid. What he’s doing in it is another matter, to say nothing of why you’re watching it.