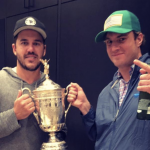 Shep Rose was following Brooks Koepka, his friend since 2018, at the 2021 PGA Championship

KIAWAH ISLAND, S.C. — Brooks Koepka walked up to his ball on the Ocean Course’s 11th hole, chasing down both Phil Mickelson’s lead and his five-major total, when in the heat of the moment someone caught his eye. For the first time all day Koepka broke character, cracked a smile and walked over to the ropes.

The pair fist-bumped and Koepka went back to trying to win a major championship.

If the name Shep Rose doesn’t ring a bell, ask a reality show-watcher in your life and there’s a pretty good chance they’ll set you straight. Shep is the star of Bravo’s hit reality TV show “Southern Charm,” which is preparing to shoot its eighth season. The show charts the lives of a group of hard-partying Charleston socialites. He’s also an avid golfer himself, and with the tournament coming to his hometown this year, he’s taken on a kind of ambassador role for the event.

On Saturday, Shep was on the sidelines rooting for Koepka. The pair first met through their mutual friend Greg Norman Jr. It was 2018; Shep was working for the Norman Companies at the time, and Koepka was sidelined with a wrist injury, so Norman Jr. put together a dinner in West Palm Beach, Fla., where Koepka lives.

“So we sit down to dinner and we start chit-chatting,” Shep said. “Then after about 20 minutes he leans in and says, ‘By the way, I really love your show.'”

Koepka, it turns out, needed something to watch as he killed time nursing his wrist injury. His now-fiancee Jena Sims was hooked on the show, and it didn’t take long for Brooks to follow suit.

“I was like, Oh my gosh! Why are you watching my show?” Rose said. “I was totally incredulous whenever anybody tells me they watch the show — especially Brooks.”

The pair “clicked,” Shep said, and they eventually took the party back to Koepka’s house, where he posed alongside the U.S. Open trophy. The night sparked a friendship that remains strong to this day.

That trophy was the only major Koepka had at the time — and candidly, he wasn’t sure there’d be more to come. His wrist injury had him “worried,” Shep says, but watching him fight through his recovery underlined Koepka’s determination and natural ability.

“Brooks is such an apex athlete,” he says. “Anything he wants to do he can do.”

Along the way, Koepka has embraced somewhat of a villainous image, taunting pundits and even a few players, sometimes simply with brutal honesty. It rubs people wrong by design. Shep, for his part, thinks it brings a welcome breath of fresh air to the sport.

“He just doesn’t care about the bull—-. I respect that,” he said. “It’s refreshing, honestly.”

As for Shep’s own golf game? It’s trending in a positive direction — which he’s not entirely happy about. Down from a 10 to a 7 after a series of good rounds. Golf runs in his blood — his great aunt is a former U.S. Women’s Amateur champ — but for this season at least, he just hopes it doesn’t run too deep.

“I miss getting those strokes,” he said.