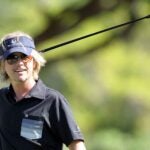 David Spade doesn't have a handicap but says he plays bogey golf.

Actor and comedian David Spade can’t be bothered to tally his handicap, but if you’re in the market for hot Ray-Bans you may have found your man.

There’s a photograph on Instagram of you and Tiger Woods in a golf cart. Do you play together often?

No. I got a lesson from him the day before his car accident. This was at Rolling Hills in Palos Verde. I told him, “Well, I don’t think I can get any better, but I’m always up for a lesson.” It was sort of nerve-racking. We got to drive around in the same cart even though it was still Covid-y out. He putted a little bit with me, gave me some reads and then we went out and played a few holes.

Did you caddie as a kid?

I grew up in Scottsdale, and there’s courses everywhere. I had a bad neck, so I never caddied, but I was a cart washer at the Phoenician, so I just saw the grimy underside of golf, which is stealing people’s sunglasses and their suntan lotion after they forgot them in the golf cart and then saying, “Nope, nothing in here.”

Do you keep track of your handicap?

No. If I’m doing all right, I’m usually a bogey golfer. Birdies are pretty rare.

What did you blow your first big celebrity paycheck on?

My mini first splurge was a $400 leather jacket that was too heavy and I looked like Fonzie, but I thought it was so cool — and everyone else thought I looked so stupid. The second one was a ’95 Land Cruiser that I still have.

I don’t think Rock plays. Sandler just started again, so he’s number one. K.J. would be a power hitter who can crack the s— out of it like Bryson.

I was trying to say it in a more flattering way.

Who would be in your dream celebrity foursome?

I already played with Tiger. Tony Romo’s probably too good. Most guys are too good. You’re gonna have to find out who’s willing to play with me.

There’s a mural of Kurt Cobain that went viral on the internet because clearly it’s a painting of you and not Cobain. Explain.

An artist put that up as a joke on a building in Austria. It’s got a quote from Neil Young under it. It’s the wrong quote on the wrong photo and the wrong person. It did what the artist wanted. People got crazy. So if I ever go to Austria to do stand-up, hopefully I’ll have a fan base there.