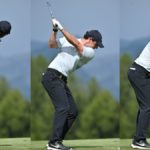 Upon my introduction to golf I was just like most kids.  I used borrowed clubs (that were too big and heavy for me) and basically just fumbled my way towards occasional greatness.

Every effort of mine was to make the lowest score possible and I played more than I practiced.  There were never any golf lessons taken, just newspaper “Black Knight Golf Tips” read, videos of John Jacobs watched, and nuggets from good golfers picked up along the way.

One of those nuggets was a tip from our Club Champion, a prolific ball-striker who hit the ball in the middle of the clubface with “butter knife” old-school blades every time.  The tip he shared was simple, yet profound, and something his golf swing embodied with incredible regularity.

“Finish in balance, with the club shaft across the back of your head and your belly-button pointing to the target… every time.”

I took his advice to heart and employed it religiously.  It formed the framework for my golf-swing.  It sped my improvement along exponentially, and it guided me, sans lessons, to much success as a young golfer.

To this day it has remained one of my maxims as a golf instructor.

How To Reverse Engineer your Swing

Pay attention to any leading golfer throughout the ages and you will see a number of differences and a few commonalities.

One of the commonalities of all great ball-strikers is a powerful, balanced, poised follow-through.

I maintain that good finishes (in everything) are preceded by good things… logical enough right?  Well, how about we use that observation as an approach to developing the golf swing?

In other words, we are going to reverse-engineer our method for success.

A Drill To Try

Begin by posing your impression of a perfect, balanced, strong yet elegant follow-though.

From the ground up, pay attention to the following elements

Pressure driven into the heel of the lead foot with the trail foot perched up onto the toes with very light pressure on them.

Knees gently “kissing” each other.

The pelvis pushed upward with the slightest arch in the lower back,

Hips rotated toward the target with your belly button pointing to or slightly “past” the target,

The trail shoulder closer to the target than the lead shoulder,

The lead elbow folded and situated around (or slightly below) the lead shoulder,

The trail arm extended, but not rigid, across, or slightly above the shoulder line,

The club-shaft pointed slightly to the ground and across the nape of the skull, and

The neck relaxed, the chin up and the eyes looking toward the sky.

Strive to return to that place every time.  As you develop, add speed to your swing, but do not sacrifice the follow-though form.

You will quickly discover how the athlete in you organizes the swing efficiently in order to stick the perfect finish.