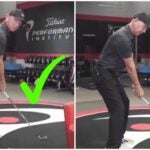 Early extension is one of most common — and most problematic — flaws that creeps into recreational golfers’ swings. It’s usually the product of poor hip flexibility, and in short, it’s when your pelvis moves toward the ball on the downswing so that your body appears in a relatively straight line by the time it gets to impact. It’s an inconsistent move, because it means your body is moving backward and forward, which raises and lowers the handle, all of which opens and closes the clubface.

In a nutshell, it’s bad news.

How can you avoid the dreaded Early Extension? Enter GOLF Top 100 Teacher Dave Phillips, Jon Rahm’s swing coach and, as co-founder of the Titleist Performance Institute, one of the foremost experts in golf when it comes to how the body moves during the swing. And when it comes to early extension, he says that often it’s caused by something surprisingly simple.

“I like my players closer to the golf ball,” Phillips says. “If you look at Jon Rahm, he’s probably as close to the ball as anyone. Tiger Woods was probably the second, and those are two of the best iron players ever.”

Early extension, Phillips explains is often an effect caused by an unbalanced setup. Specifically, standing too far from the golf ball.

“If you’re close to the golf ball, that actually puts you in position where you need to move [your trail hip] out of the way and work the club out in front of you.” he says. “If you stand too far away from the golf ball, as many players do, they tend to rock to find balance…their pelvis actually moves towards the ball on the backswing, and then we see more early extension.”

Good posture can solve more issues in your golf swing than you even realize. Have your weight balanced over your foot, with your arms hang loosely below your shoulders and close to your body, and you’ll probably hit more consistent iron shots.