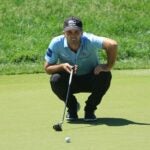 Denny McCarthy lines up a putt at the Memorial Tournament on Friday.

Anyone who plays golf knows what a difference it can make to your score when you putt well, though it can be difficult to describe what exactly that means since it tends to vary from player to player.

But at this week’s Memorial Tournament, contender Denny McCarthy managed to explain exactly what being a good putter brings to his game — and it’s something all golfers should aspire to.

As a preface to McCarthy’s remarks, earlier this week, McCarthy was called out by Rory McIlroy as being one of the Tour’s most consistently good putters. “He’s up there in the stats every single year,” McIlroy said.

McCarthy is currently ranked 5th in Strokes Gained: putting, and after his second round at Murifield Village on Friday, McCarthy was asked about what it’s like to maintain his reputation as one of the best putters.

“Everyone has the best part of their game. Obviously putting is part of mine,” McCarthy said. “I’m no slouch around the course, like putting is not the only thing I do well. Everyone brings up my putter; yes, I’m a good putter, but I need to do good things to get to those putts.”

McCarthy said that one of the primary benefits of putting well is the pressure it relieves from other parts of his game.

“It frees me up a little in that like I don’t need to feel like I stuff a 7-iron from 180,” he said. “I can feel like I can just hit it a good, conservative shot on the green to 25 feet, and I like my chances from there. I don’t need to be super aggressive.

“When I get wedges in my hands, wedges and short irons, that’s when I need to attack,” he continued. “If I start getting 7-iron out, that’s when I’ll be a little more conservative and trusting that my putting ability is going to help me out.”

Sounds like McCarthy’s strategy is paying off so far — he’s one shot behind Cameron Smith’s lead at the Memorial Tournament’s halfway point.