Golf Questions You’re Afraid to Ask: Why do most beginner golfers slice the ball? 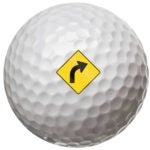 So, you recently picked up golf. Congrats, and welcome! If you’re struggling, don’t get discouraged. Golf has a high barrier to entry to reach the point where you feel like you’re actually playing. You can run around a soccer field or a basketball court and feel like you are part of the action but topping golf balls or shanking them into the trees isn’t all that fun.

You’ve worked past that stage and are now getting the ball airborne. There’s only one problem — you’re slicing every shot. The ball starts where you aim, but then curves right, right, even further right. Fret not! You’re in the same position as so many golfers when they start out. (And, for that matter, many golfers who’ve been at it for years.)

Why do most beginners slice the ball?

In most sports, our instincts help us learn the basics. Not so much with the golf swing.

Beginners struggle because “their instincts betray them,” Top 100 Teacher Brady Riggs told me the other day. “It all starts with the grip. Most amateurs left-hand grip is in too weak of a position at set up and it leads inherently to an open club face. That’s where all the trouble begins.”

It’s true that you don’t want to white-knuckle-death-grip the club, but too loose isn’t the answer, either.

“This has been going on as long as golf has been played,” Riggs said. “People will put their left hand on the club, and it feels like if they turn it a little more under, a little more to the left, that’ll help the clubface and the ball go left, but it really does the exact opposite.”

This is the beginning of our instincts failing us.

Why is a slice so hard to shake?

What beginners don’t understand is what they think is the solution actually makes their slice even worse. Beginners try to swing more to the left to make the ball go left, which only makes the ball spin even further right.

Riggs said that you may notice your slice might be worse with your driver because you are swinging with more speed and less loft. The same swing mistakes are probably happening with every club — driver just accentuates the error.

If you are struggling with a slice, you can take solace in knowing you are not alone.

“It’s basically the teaching pros’ moneymaker — it pays the rent,” Riggs said. “People just don’t have a clue how to fix their slice. Everything they try makes it worse and they end up having to go see somebody who can help them.”

Almost every beginner struggles with this at some point. The swing is something that most of us just don’t naturally get. It takes instruction and lots of practice.

If you’re regularly hitting a slice, does that mean your natural ball flight is left to right, and you should be trying to hit a tight fade?

“I think most people need to slay the dragon,” Riggs said. “It’s hard to go from a big, huge slice to a controllable fade. Usually you’ve got to get somebody to do something significant to get them to really improve [their slice].”

Basically, he said, it’s better to get the ball going in the opposite direction rather than tightening the slice.

OK, but how do you do that?

There is a simple way to get your hands in a better position.

“If [you] have a glove on, there’s a seam on your glove running between your thumb and your index finger on the top of the glove as you look down,” Riggs said. “That seam should run down the top of the handle or grip. If it’s coming down the front side or the left side of the grip, then the hand is turned too far to the left.”

This easy trick can help you get your ball flight heading back toward the middle of the fairway. And it’s simple to check before every shot.

If you’re on the range, there are some more tips and tools to help squash your slice.

Riggs said that you can use an alignment stick parallel left to your target. If that line is 12 o’clock in your mind, “[you] need to feel as if they’re swinging toward 2 o’clock.”

You can even use an alignment stick and point it toward 2 o’clock to help you get your path on a better line.

How do I take it to the course?

Now you’re out on the course and after thinking you got the slice under control on the range. But out of nowhere it is reappearing and your whole round is falling apart. How can you salvage your swing, and your score?

Riggs has three simple steps to quickly help mitigate your slice in the heat of battle.

That last step sounds scary. Trying to swing right when all you want is for the ball to go left can feel almost impossible. But as Riggs says, “What do you have to lose?”

Another golf ball, maybe, but not much else.