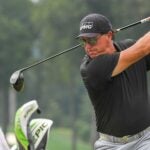 Phil Mickelson on the range ahead of the third round of the BMW Championship in late August.

Phil Mickelson, ahead of Friday’s first round of the Dominion Energy Charity Classic, was on the range at the Country Club of Virginia, and there was little he wasn’t measuring. In front of his feet was an alignment stick. Behind him was a Trackman. To his left were a couple members of his team.

While it was a lot, the most important piece of information he was after was actually pretty little.

“I try to do some iron work and get my irons, wedges, start hitting my number — I start to see how far the ball’s flying,” Mickelson said Thursday when asked what the focus of his pre-round range work is.

“Each day it’s a little bit different, so I’m trying to use that as a reference on the range as far as if irons are going a couple yards longer, a couple yards shorter. There’s a lot of variables that go into the details of how far the ball’s flying each day, and it changes obviously day to day and throughout the day, right? As the temperature warms up, the ball flies a lot farther, so little things like that.”

While certainly not complicated, it may also be useful to those of us who aren’t six-time major champions with a logo and signature coffee blend and may just hit balls to hit balls. Now 51, Mickelson said his range sessions are usually longer than when he was younger, lasting upwards of an hour and a half.

This week, after a PGA Tour season where he won the PGA Championship in May, then missed the cut in three of eight events, Mickelson said he was playing the 50-and-over circuit “to work on a few things” to end the year.

“I guess just to kind of finish the year strong and have a chance to work on a few things with my game and see if I can have a productive offseason heading into next year,” he said. “But really, there’s nothing specific like the Masters months from now that I’m thinking about. I am working on a few things in my golf swing, and it’s been fun for me to have a competitive environment to try to implement it.”