What is young Tiger Woods working on in this interesting old video? 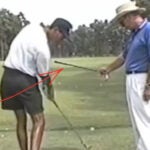 An old video from 1993 shows Tiger Woods working on his ole' golf swing.

There’s nothing better than when a vintage clip of Tiger Woods comes across your social media feed. This week one of my favorite Instagram follows (GolfBetterTucson, who you can follow right here) shared a fascinating one of Tiger Woods and Butch Harmon, working together in 1993. There’s a lot the rest of us can learn from it.

In the clip, you can see Tiger hitting an iron at full speed, and his then-coach Butch Harmon standing just in front of him, holding a golf club in his way.

Tiger embarked on his first major swing change in 1998. Before that, young Tiger had a stronger-than-neutral grip and a club that was slightly shut and across the line at the top of his backswing. He would make it all work by using a huge, fast rotation of his hips along with some A+ timing with his hands.

When it worked (and it did often) he would hit drives impossibly far. But later he spoke of his younger swing being heavily dependent on timing. When things would go wrong, his hips would spin too soon and leave his arms stuck behind him. That would send them way out to the right, which would cause high hooks or blocks.

“It’s a product of being a junior golfer, trying to hit the ball far,” Tiger says.

Tiger used to call it his “ole'” golf swing. You can hear him talk about it in his famed GOLF Channel Academy segment below:

Which brings us back to the initial video. To prevent Tiger’s arms from getting stuck and flying out to the right, Butch is holding an obstacle in his way. That keeps his arms moving more to the left, keeps them from flipping as much, and prevents the blocks and high hooks that would happen when his ole’ swing went wrong.

“A big thing we’ve worked on is getting Tiger to feel like his arms are more in front of him on the downswing,” Harmon says.

An interesting insight into the best before he reached the pinnacle, and a good reminder for the rest of us: Even the best golf swings require fine-tuning.

Playing in a pro-am? Here's some advice from top LPGA pros