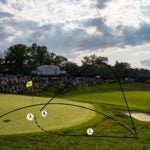 Short-sided chips are never easy, but you do have some playable options.

Every spring, tournament organizers at Muirfield Village grow out the rough lush and thick in preparation for the Memorial. They dial up the undulating greens to Augusta National speed. The 18th green slopes dramatically back-to-front, and large crowds gather on the grass amphitheater above, ready for drama. So what happens when you hit your approach shot over the green? Nothing good, that’s for sure.

Few shots in golf are more difficult than a downhill, short-sided chip shot from a bad lie. But unless you’ve got a time machine or a mulligan, all you can do is make the best of a bad situation. Here are four shots to consider:

Priority No. 1 when short-sided in the rough is to get the ball on the green. Otherwise, you’re at risk of your next shot being just as difficult as the one you’re currently dreading.

Your smartest mindset is undoubtedly this one: What shot can I hit that is most likely to get my ball onto the green? In this case, it’s probably a standard chip shot aimed above the hole. Visualize a flagstick to guide your focus. A two-putt bogey is a victory.

It’s often easier to judge a low-flighted shot than a flop, especially from an imperfect lie. If you’re feeling bold enough to go for the pin, play a bump-and-run that lands short and trickles down to the hole.

4. Climb high for the glory

It’s your best chance at par — or triple. But hey, it’s just golf! Permission granted to ask,“What would Phil do?” and try the mega-flop. The key here is to open the face and play it like a bunker shot, sliding your wedge right underneath the ball. If you’ve judged it right, it should fly high and land soft. Of course, it might get tougher with the entire Memorial gallery watching.

8 things I'm doing to keep my game sharp this offseason

How to use your bank card to improve your putting at home — for free!