This was one of Sam Snead’s signature moves — it should be yours, too 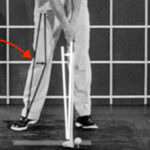 Sam Snead had one. So did Ben Hogan, Bobby Jones, Lee Trevino, Jack Nicklaus, Byron Nelson and an army of other greats. Nowadays, you can see the move most prominently in the swings of Rory McIlroy, Matt Wolff, Kyle Berkshire, and Bryson Dechambeau.

That move is a golf swing “trigger” — a small, subtle movement (usually with your lower body) that initiates your golf swing.

I was reminded of that while strolling through the archives this week. Memphis Country Club pro Pat Abbott, in the 1954 clip posted below, makes note of Snead’s trigger. It’s predominantly a lower-body move, where he kicks his trail knee toward the target and turns his hips, which has the effect of leaning the shaft slightly forward.

Abbot even isolated the movement with a handy visual:

At the time, triggers were mostly considered beneficial as a kind of tension-reliever. Let some nervous energy out of the system, and get the swing off to a smooth start.

But after a brief hiatus, golf swing triggers have been coming back into fashion recently, and many coaches are actively teaching them. With the continued rise of technologies like force plates and 3D, which measures the amount of force golfers push into the ground during their swing, coaches and biomechanics have found that a golf swing trigger doesn’t just help relieve tension — it can help you hit the ball farther, too.

It goes down to a concept called countermovements, and without getting too bogged down in the details, think about it like this: If you want to jump high into the air, you first have to squat into the ground. Same as throwing a powerful punch. Your first step is cocking your arms backwards.

Those are counter movements, and that’s what a golf swing trigger is. As GOLF Top 100 Teacher Mark Blackburn explains in the video below: Pushing or kicking slightly into your lead side to start your swing effectively creates a springboard effect that will improve your weight shift later in the swing.

What’s old is new again, so give it a try. Don’t go overboard, that’s all I ask. All it takes is a subtle push into the ground with your front leg. Give yourself some momentum, and your swing will be instantly transformed into Sam Snead’s. Maybe.