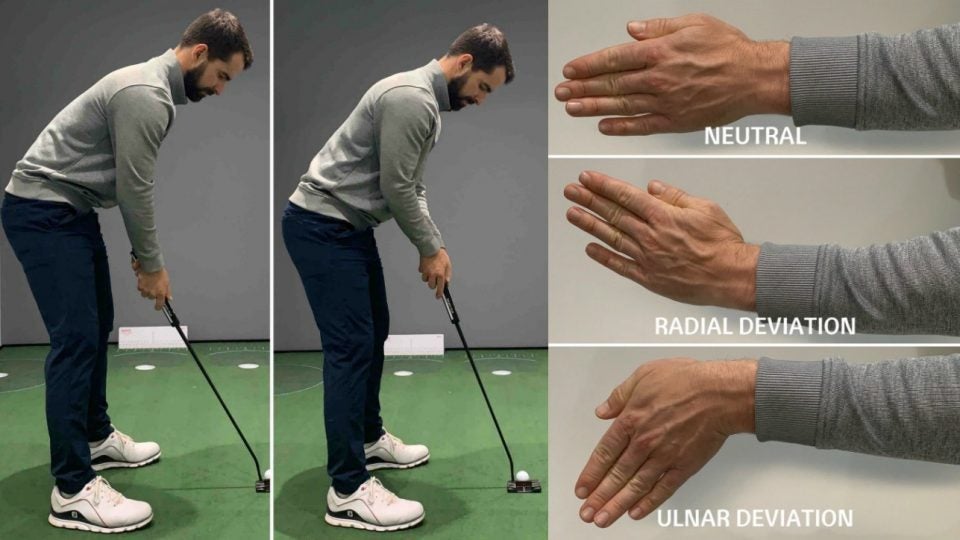 Put simply: A good putting stroke returns the putter to the address position at impact. Easy to write, difficult to achieve. The most effective way to do this is to eliminate variables. Good putters maintain the angles they create at address and minimize wrist movement through the stroke.

According to data from coaches using HackMotion (a specialist golf product analyzing wrist movement) showed profound differences between the wrist motion in a Tour Player vs. the average amateur golfer:

‘Tour players are limiting the range of wrist motion during putting stroke and they are very consistent at repeating it. Amateurs on the other hand typically move their lead wrist joint a lot and have a lot of variation between any two putting strokes.’

For the putter face to return to square at impact, the shaft angles need to be well maintained throughout the stroke. Excessive wrist movement in the putting stroke changes those angles, which adds unwanted variables. This leads to inconsistent impact positions and poor management of the putterface.

So, what can we do to stabilize the wrist within the putting stroke? Well, a very simple method is to ensure a greater amount of wrist ulnar deviation at set up, compared to our normal swing set up position. 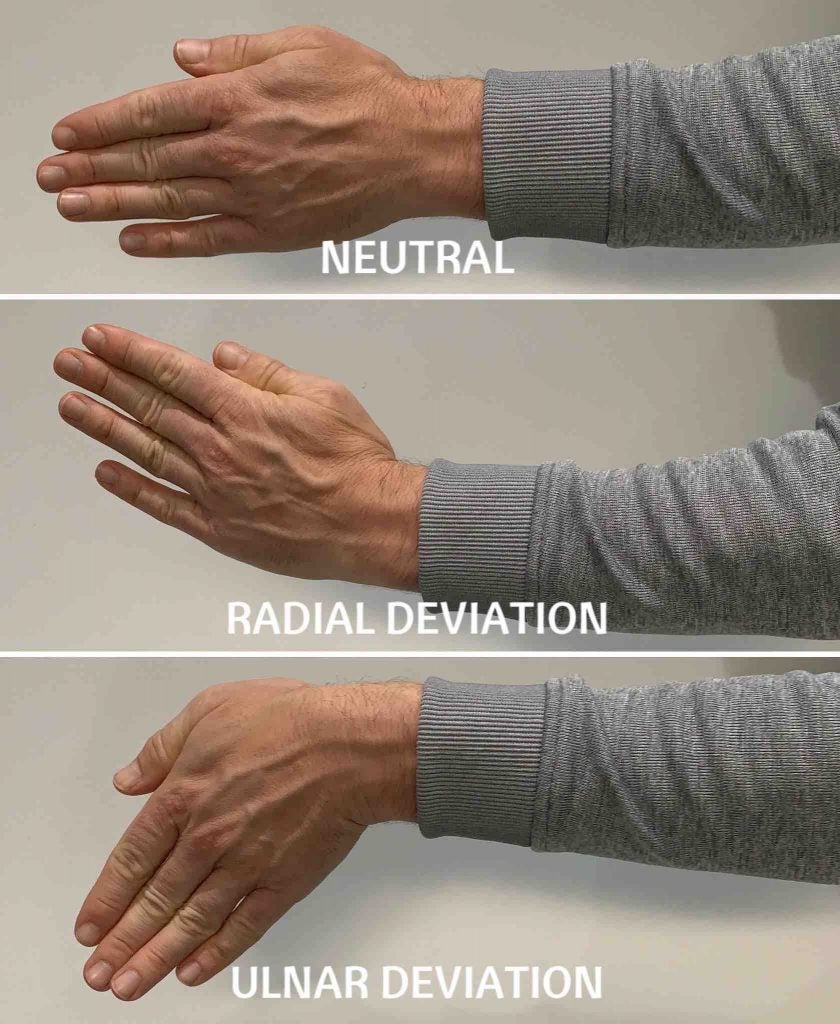 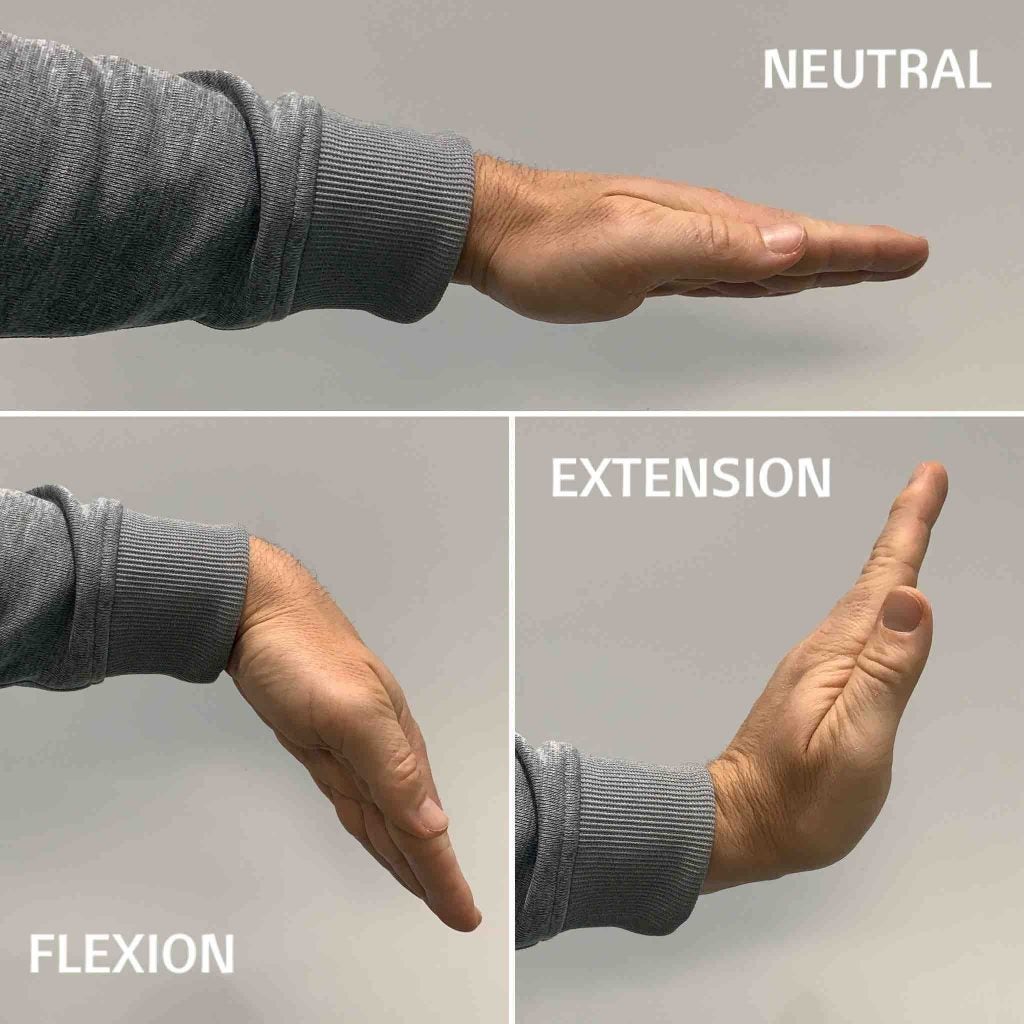 How and why does ‘ulnar deviation’ work?

Consult the pictures above and try for yourself. Whether you’re sitting or standing, hold your forearm out in a horizontal position with a neutral wrist and attempt to flex and extend your wrist as much as possible. Observe how much range of motion you actually have — it’s a lot.

Now, position your wrist in a more ulnar position and attempt the motion again, flexion and extension. You should notice the range of motion has decreased and it’s actually harder to do. This is the first reason ulnar deviation of the wrist is preferred: it limits range of motion in your wrist, which begins to reduce variables. 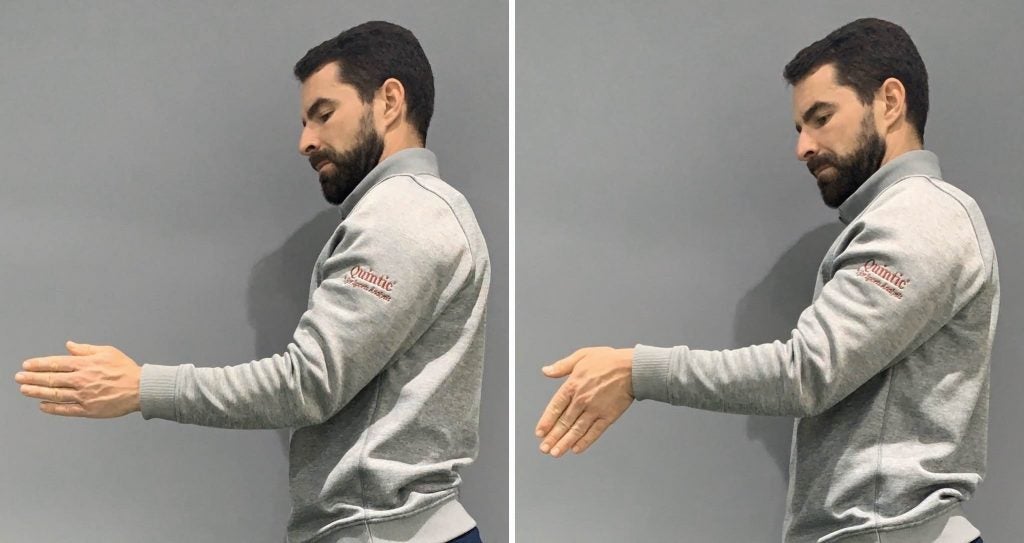 Next, develop a greater feel for the mass of the putter, both at set up and during the stroke. Take a golf club and grip it as normal in your left hand. Now extend your left arm out horizontal in front of you, noticing what the wrist does. In order to manage the weight of the club, your wrist should move into ulnar. From this position if you make some back and forth motions with your arm / the club, you should notice how stable the wrist feels. This is the feeling we want to transfer into the putting stroke. The wrist that’s stable yet with limited range of motion. That’s the beauty of ulnar deviation. 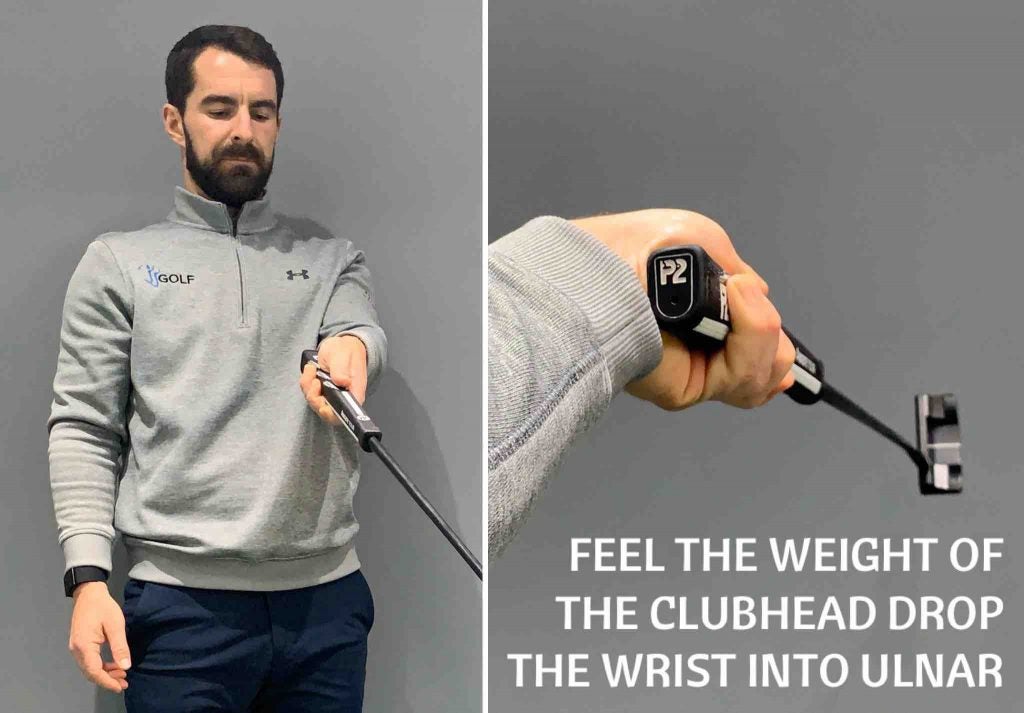 A very simple but effective drill to monitor wrist movements in the putting stroke is to use a small pen or pencil, or even a small ruler. Using your watch, rubber band or tape, attach the ruler to your wrist in either of the two ways pictured. Now simply start hitting putts with the pencil (or whatever else you choose) attached.

The goal is to keep the pressure at all points of the pencil throughout the motion. If there is any wrist manipulation you should be able to feel the pressure increase in one area of the pencil vs. the other. If your contact pressure changes, you have changed the lie angle of the putter during the stroke. If your contact pressure changes then you have changed the shaft angle of the putter in the stroke. 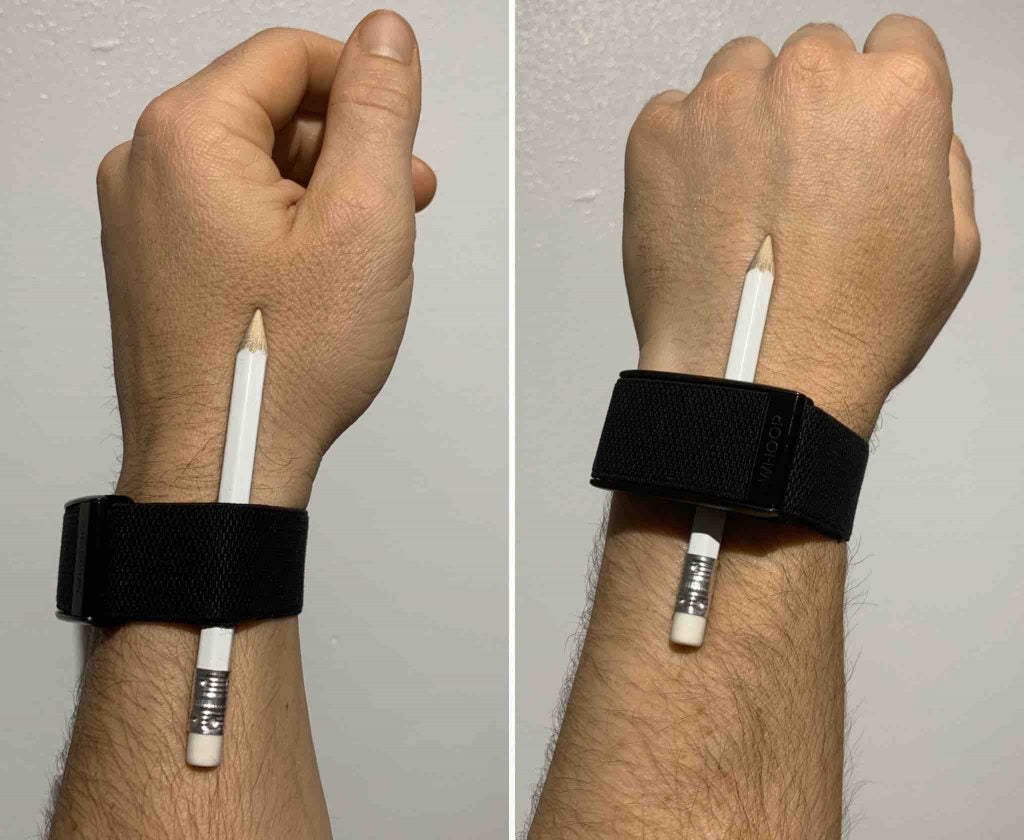 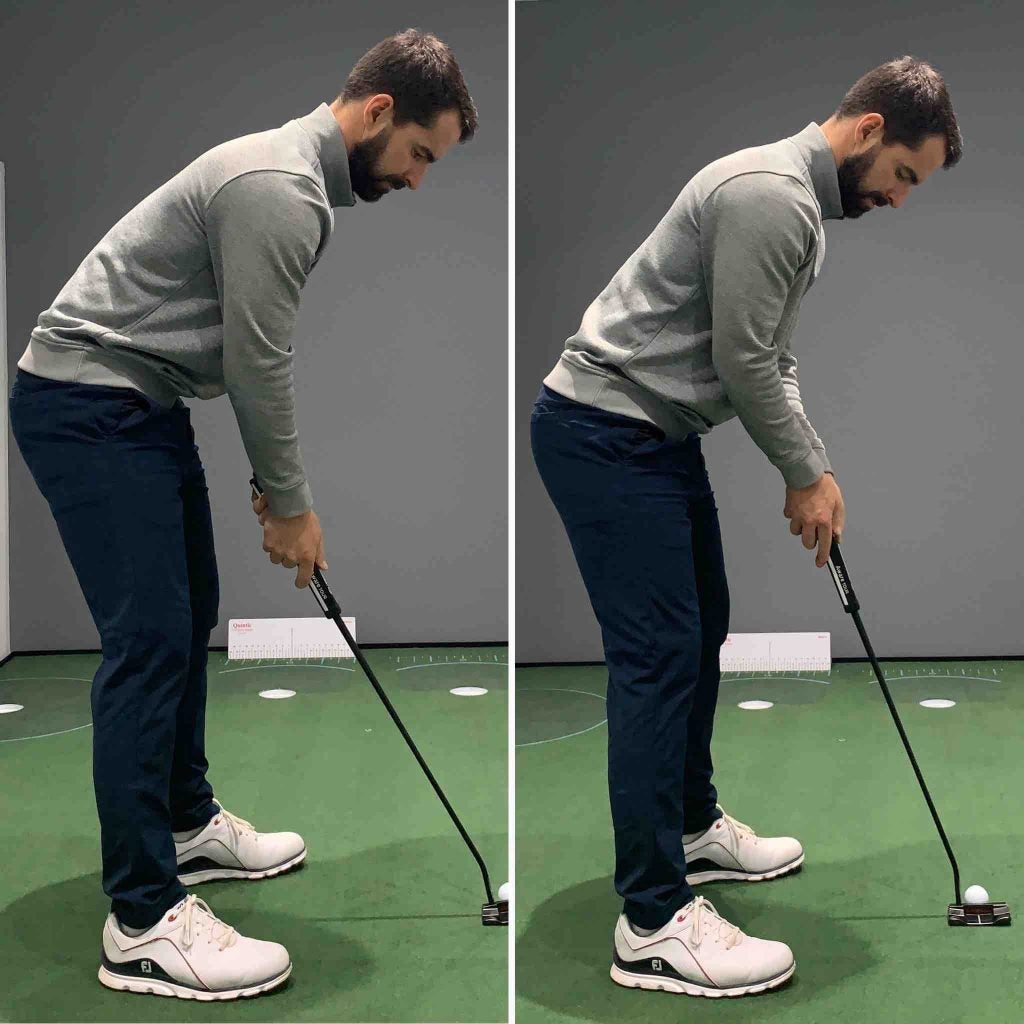 If you want to know how your wrists move during the putting stroke (or any other swing) I highly recommend Hack Motion ($795, free shipping with the code JJGOLF) which measures wrist movement, plus the tempo of your stroke. Compare this movement to the best players in the world. In fact, measure and compare your wrist motion to the best players for every aspect of your golf game.