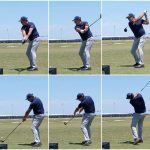 KIAWAH ISLAND, S.C. — Phil Mickelson’s golf swing has been one of the most recognizable and long-lasting. It’s part of his entire honor: Free-wheeling, rhythmical, and wild — it’s everything we love about Phil Mickelson, embodied in a golf swing.

And it’s been working incredibly well this week, with the 50-year-old leading the field in Strokes Gained: Tee-to-Green. Phil has worked with Rick Smith and Butch Harmon in the past, but with his coach Andrew Getson understandably busy this week, we asked GOLF Top 100 Teacher Jonathan Yarwood, to break down a few key moves in Phil Mickelson’s golf swing for those of us watching from home.

Phil Mickelson’s golf swing is one-of-a-kind, with a few idiosyncratic moves that can, at times, cost him accuracy, Yarwood says, but he makes work nevertheless.

“It’s stood the test of time,” Yarwood says of Phil Mickelson’s golf swing. “There are some key elements that really make it work.

“His weight is evenly distributed on the balls of is feet, with a good athletic posture and his arms hanging below his shoulders,” Yarwood says.

“Phil has rolled the club flat and and his arms are deep behind him. This will require him to make adjustments later to avoid hitting it to the right,” Yarwood says.

3. Top of backswing: Club long and across

“With his arms deep, the club continues long and across the line, his body needs to start changing direction to try and get the club back to the ball. Powerful, but occasionally wild,” Yarwood says.

“This is most amateurs worst nightmare and testament to Phil’s ability: Steep, narrow, and the clubface open. Most couldn’t make this work, but Phil’s hand-eye coordination is the world’s best. He uses his feel and artistry from here to hit the shot,” he says.

“Phil’s trail arm is extremely active through the shot to square the face. Talent and split-second timing, time and time again,” he says. “Total respect for his recovery skills and his ability to make it work.”