Driving is important, but players win championships with their putter 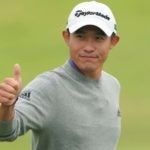 You’ve heard it before. Every golfer has: “Drive for show and putt for dough.”

As a kid I heard this preached to me and it lodged in my mind. Recently, however, Strokes Gained data debunked the axiom and attention and emphasis shifted to the Driver.

The truth is the driver is an important club and the focus it has received is fitting.  The shadow of that truth though is the Driver is indeed important but if you want to win tournaments you have to make putts.

It may sounds old-fashioned in the modern day game but a guy who can putt is typically a match for anybody.

On the odd occasion you may find an instance where the player is able to ball-strike his/her way around a balky putter, but the reality is that if you are not holing putts you are likely not contending.

How about we remember this quote?:

“Miss putts and miss cuts.”  Add to that, if you want to win you probably have to make every putt inside eight feet over the final nine holes.

Please do understand, I am not discounting the value of long, STRAIGHT driving.  In fact I emphasize accurate (and if possible, long) driving to all of my students, because offense begins in the fairway and defense begins in the rough.

As we saw in last week’s PGA Championship, it is possible to play from long wayward drives but that approach is unpredictable at best.  Building on the theory of driving it well for success, I will concede that in any given week on the PGA TOUR, the best putter of all of the top ball-strikers is likely to win.  Last week that was Collin Morikawa.  He struck the ball beautifully (as usual) and he made putts, and timely putts at that.

Morikawa led the field in Stroke Gained Putting. He gained over eight strokes on the greens and parlayed that performance (one of his best on the greens) into his first Major Championship victory.

How about we learn from what our newest Major Champion was up to in a effort to putt that well under pressure? (His coach, Rick Sessinghaus shared some insights):

Collin’s caddy, JJ Jacovak (a good player in his own right -—Div. II National Individual Champion at Chico State) recommended a posture change to Collin in the lead-up to The PGA. Specifically that adjustment was moving 60% of the weight to the front foot to promote a lower arc though impact.

In the era of trying to “hit up on the ball” to promote a cleaner roll I have seen too many players swinging upward too much. A number of issues, most notably excessive head movement and putts being struck “thin”, arise from this misunderstanding.

Mishit putts will never roll cleanly and/or anywhere close to the intended distance so I advise that you spend time focusing on contact while putting.  You can also fiddle with your weight distribution at address.  Try moving a little pressure to the front foot – you may be pleasantly surprised how it will stabilize your body and improve your strike.

(Incidentally, it is a tip Gary Player has always stressed to me and he made his share of putts en route to the Hall of Fame.)

Rick Sessinghaus mentioned to me that he and Collin always focus on speed control on mid to long range putts.

This probably sounds trite but it is a highly overlooked key to success.  One statistic that I stress to golfers of all stations is “3-Putt Avoidance”, and the easiest way to limit 3-putts is to be really sharp with controlling the speed of the ball.

Practicing short-range putts is worthwhile but, if you show good speed control the speed you will leave yourself shorter second putts, which means less stress.  Also, good speed “widens” the hole and your putts that are slightly off the mark will have a better chance of toppling into the cup.

So get out on the putting green and devote some time to rolling long putts to within a three foot circle around the cup.   Do it from all ranges and all slopes.  Have fun, be creative and do it everyday – your score will manifest your investment quicker than you realize.