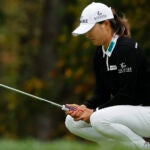 Jin Young Ko regained her spot at World No. 1.

Among the reasons you, dear reader, are not the top-ranked golfer in the world* is this: You haven’t worked hard enough to get there.

(*apologies to Jon Rahm if he’s reading this)

After her latest victory at the BMW Ladies Championship, her fourth win in seven starts, Ko regained her spot atop the world rankings. When she’s playing well, it looks effortless; she’s intensely focused during tournament rounds, but she’s quick to laugh and to make friends the moment she has finished out on 18. That appearance disguises the truth: Things aren’t always easy. Sometimes they’re very, very hard.

Sometimes that’s intentional. Ko sends herself to boot camp and finds some satisfaction in that grind. Even after her victory Sunday, she rejected the idea of a huge celebration and said she’d be evaluating the shortcomings and mistakes from her round and work to correct them.

“And so for me, I think the more difficult process is when I’m preparing for events and when I’m training. And it’s also more fun at the time when I’m actually training because I think it’s fun to feel the improvement that you make after hard work. So that’s what’s really a driving force for me.”

Ko was unsatisfied with her golf leading up to her participation in the Olympics, where she considered the showing so far below her standards that she took a break from competition to retool her swing. It’s worth noting that “below her standards” here means she finished T9 in Tokyo — hardly an embarrassment! — but felt she was so far off that she skipped the British Open two weeks later. The month of extreme training meant long days at the course.

“During that time I would go to the range around 8 a.m., and I would finish around dinnertime. And so it was just the driving range and the gym, and I was going back and forth between practice and gym.”

Ko said the regimen tapped back into the mindset she’d adopted during her formative junior golf years — which sounded even more extreme.

“I think that during that [practice] time you kind of discover which areas needs improvement. And when I was a junior player, there were days where I felt like I was going to die from all the practice. And sometimes, even if you turn professional, I think you need that mindset from time to time. And so I think, yes, that’s what was needed.”

That’s a heck of a level to get to: Feeling like you should practice so hard you might die from all the practice. But again, she’s No. 1. We’re not. (Again, Jon, if you’re reading, apologies.)

But there are other times when things are hard and not on Ko’s terms. She was in the United States getting ready for the major season. She couldn’t visit South Korea because of Covid-19 restrictions. And her grandmother fell ill.

“That situation was very, very difficult,” she said. “During the week of ANA, I think I slept maybe three to four hours a day because I was crying so much.”

Ko described the period as the “adolescence or puberty” of her professional golf career. A nagging question kept popping up. What’s the use of this?

Ko has the maturity to recognize that her own happiness should always be a priority. “Golf is a means to get there. It’s not an end for me,” she said. She wasn’t happy playing golf. But with time came peace. She returned to Korea. She saw her grandmother. She felt a sense of comfort.

Asked about the strongest and weakest points of her game, Ko answered philosophically.

“I have to say my strongest point and my weakest points are meshed together and similar. I don’t know if that makes sense, but I feel that’s the case.”

As for her post-victory plans?

“I’m still a student in my coach’s eyes. So we’ll practice, and we will try to do our best in the remaining events.”

Simple, when she says it like that. Even when we know it’s hard.