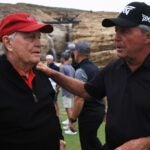 Even though Gary Player is 84 years old, he’s still trying to find ways to improve his game. And there may be no one better to learn from than Jack Nicklaus. With 27 majors between the two legends, there is quite a wealth of knowledge there. But that doesn’t mean they aren’t still open to new information regarding the swing.

In a recent video posted on Twitter by Nicklaus from the Payne’s Valley Cup, viewers got the rare opportunity to be a fly on the wall as the Golden Bear gave Player a swing lesson. The video is fascinating — especially for the swing nerds out there — and gives fans some insight into how some of the all-time greats think about the mechanics of the swing.

The conversation might go over the heads of those who aren’t total golf swing nerds, but there are a few things that anyone — of any skill level — can learn from this conversation.

As previously noted, these two men have 27 majors between them and are two of the best to ever play the game. But even with resumes like theirs, they are still looking for ways to improve. It can be easy to become complacent with your game, but if you really want to get better, you should always try to find weaknesses in your swing to improve. If Nicklaus and Player are still tinkering with their swings in their 80s, it shows that the journey to improvement truly never ends.

2. A good swing is always evolving

About halfway through the video, Nicklaus mentions that in his 1962 U.S. Open win at Oakmont, his shoulder plane was in one position, and then two years later it was in a totally different spot. Player asks if he’s totally sure and, if so, why that happens. “I swing different,” Nicklaus says. A simple explanation, but an insightful one as well — swings are always changing.

Tiger Woods is a good example of this. He’s broken down and rebuilt his swing numerous times throughout his career, always trying to gain more of an edge. It borrows from the same principle Nicklaus illustrates here. The foundations of their swings might stay consistent, but there are nuances in their moves that are ever changing.

3. Humility is an important trait

As the video nears its conclusion, Nicklaus mentions another tweak to Player’s swing to try. Player mentions that he’s hitting it so well, he doesn’t want to change anything, but Nicklaus implores him to try it. Player does, and he loves the result.

It was a subtle act, but one that recreational players can learn lots from — always be open to suggestions. Never get in the mindset that you know better than anyone else about your swing. Player could easily have shrugged off the suggestion, but instead he showed humility and deferred to his peer’s suggestion. It seems to have paid off.

No matter how much you know about the golf swing, there’s likely someone out there who knows more. So be open to critique and criticism and you’ll become a better golfer.