How did Yealimi Noh look so calm contending at the Evian? She has a heart technique 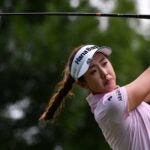 Yealimi Noh hits a tee shot on Sunday during the final round of the Evian Championship.

Yealimi Noh was short, right and about 30 yards from the hole on the par-4 10th at Evian Resort Golf Club. it was like a test on a Tuesday at a pitch-and-putt. But this was Sunday. At a major, the Evian Championship. And Noh’s only 19 years old.

“Yeah, just a little bit of nerves, I think,” analyst Morgan Pressel said on the Golf Channel broadcast. “Good one here. Judging the distance control, this type of shot with nerves is challenging, though, as well.”

Noh hit it to a foot.

Skip ahead three holes. On the par-4 13th, Noh is looking at a 6-footer for birdie to take back the lead. Here, too, these aren’t fun even if a clown’s mouth is at the other end. Noh rolls it in, takes one step to the hole to grab her ball, waves twice to the crowd and moves on.

“Those are putts right there that will win you major championships, putts from 6, 7 feet on the back nine for birdie with all the pressure in the world,” Pressel said on the broadcast.

And yet they looked like just … putts from 6, 7 feet. And shots from just … 30 yards away. Without the toppings. Though ultimately Noh would fall a stroke short of the playoff with eventual winner Minjee Lee and runner-up Jeongeun Lee6, the third-place finish marked her best in a major. Only two other times, in any tournament, has Noh finished better. Shot after shot, she played as if her head and her heart wasn’t so much beating heavily in the moment, but barely beating at all.

“Coming down 18, I thought would be like really nervous, but my heartbeat was really calm. Yeah, actually like a lot of my trainers say I have a really like — I’m really good at like calming my heart down. Like after a workout, too, I’m able to slow down the beating. So I think that is really important just trying to calm yourself down. You can feel it. Like the only thing is your heart beating. But I was able to stay calm. Just took my mind off things. I was looking out, look so lucky to have such a beautiful day today. Yeah. Just going to enjoy the moment.”

Hold on. Help us, Yealimi. For those of us whose hearts explode through their chest, what’s your secret?

“I was like just singing a song,” she said. “Today I was really looking out just at the lake. So lucky to have like no delays today. I was 100 percent sure we would get delayed. We did, but like during the round.

“It was just like a perfect day today. Just enjoying being here and being in this position.”

What was the song?

“I honestly don’t know,” Noh said. “I was just like — I don’t know. I was just trying to talk about other things, like what we’re going to eat next week when we’re not in France and we don’t have all that bread around us.”

However Noh did it, it worked. Consider: Over her first 10 events this season, she finished in the top 25 twice, but also missed cuts twice and finished no higher than 33rd in the other six events. At one of those tournaments, the Kia Classic in March, Noh was fined $10,000 for slow play, and at the KPMG PGA Championship, she admitted that it took time to overcome.

“I didn’t start the year off that well like results-wise,” she said at the PGA. “I just was really hard on myself, and then every tournament I went to just got tougher for me mentally, because, well, obviously results, but just getting like a fine, too. That definitely ruined my mood, for sure, and I don’t think I deserved it.

“It was just hard to come back from that mentally, watching my back and trying to do something that I don’t normally do. And then just been hard for me to stay positive. I been really working on it.”

“It was just so close,” Noh said of her run at the Evian. “I didn’t think — I didn’t really know what to think in the beginning of the day, whether I could pull it off. But getting there and like actually being really close to it was good.

“Just sucks because I didn’t birdie a single par-5, and I had a lot of like 6-footers coming down to make — it’s just like you always think about what you missed, but overall it was really positive.”