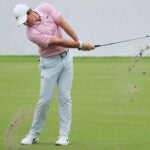 Here are several important tips from a GOLF Top 100 Teacher on how to nail it every time.

You can shoot lower scores by making the game easier. By that I mean avoiding unnecessary mistakes, like playing the ball in the wrong place in your stance with different clubs. Even pros check this constantly. Another mistake you can easily avoid while taking your ballstriking to new heights is bad stance width. Keep reading to get it right.

Making your stance too narrow or too wide at setup can force all sorts of difficult-to-time compensations later in your swing, some of which can become repetitive and take years to undo. It should never happen in the first place, because let’s be honest: Setting your feet in the correct position before you start the club back is probably the easiest thing you can do in this game. After 30 years of teaching, I’m still amazed how most recreational golfers choose to ignore fundamentals such as stance width. Here’s your chance to buck the trend.

In the photos above, I’m simulating what impact with an iron typically looks like when your stance is too narrow, too wide and just right. Let’s start with the stance that’s too wide (photo, middle). Granted there are times and places for an extra-wide stance, like when you’re hitting off uneven surfaces or slopes or when you’re looking to really bust one off the tee. In these circumstances, stance width can be your friend, but for most golf shots it’s a killer. Here’s what happens: If you set up too wide at address, you’re going to have a doozy of a time opening your hips through impact and transferring your weight to your lead side, especially if you’re not as flexible or athletic as you used to be. You also run the risk of releasing your hands too early and having your swing arc bottom out too far behind the ball.

Conversely, if your stance is too narrow, your lower body becomes way too active — good for the dance floor but not when you’re looking to catch shots solid on the course. An overactive lower body throws off your timing and balance. Check out the photo above right, where my stance is just right (heels under shoulders), and the one above left, where my stance is a tad too narrow (heels inside shoulders). Notice in the too-narrow example how my knees are banging into each other (and how in the too-wide picture there’s a huge separation between them). Now look at the just-right image: My right knee is close to — but off — my left, indicating the proper shift. More important, my hips are stable and I’m posting up on my lead side without releasing my hands too early.

Ultimately, the goal is to find a stance width (one for wedges/short irons/irons/hybrids and woods) that allows you to shift and rotate enough without overdoing it. Match the correct knee position at impact as in the photo at far right. For starters, set the insides of your heels under your shoulders. Stance and ball position are easy to get right, and they make all the difference in the world.

Mark Hackett is the director of instruction at Old Palm GC in Palm Beach Gardens, Fla.