How to make a scary shot simple, according to a sports performance coach 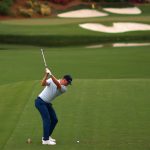 This week, we’re talking to Jason Goldsmith, a performance coach who has worked with Jason Day and Justin Rose, among others. You can buy his new book “Take Charge of You,” right here.

As is often said: Golf is like like life. And like life, there are lots of moments on the golf course that rattle your confidence. Over time, you’ll begin to dread them, and get nervous every time one arises.

It’s conquering moments like this that play as a key role in Jason Goldsmith’s new book, “Take Charge of You.” It’ll take some practice to thrive in these situations, Goldsmith says, but it starts with getting yourself in a neutral state.

“When a golfer is in a neutral state, it means they’re aware of their surroundings, focused, and evaluating them clearly,” he says.

Goldsmith went on to say he prefers golfers operating in a neutral state, rather than a overly-forced positive one, because they’re not riding the emotional highs and lows that can taint their outlook on the situation at hand. They can remain focused on the task at hand, and evaluate the situation clearly.

How do you get there? It starts with being honest about the potential outcomes and refraining them in a more positive, productive way.

Here’s one strategy that Golfsmith outlines in his book:

First, imagine a situation that you’re afraid of. Perhaps it’s an important meeting at work, or a tricky tee shoot with a tight fairway surrounded by water and out of bounds. Envision the details of the situation clearly in your minds eye.

2. Think about the bad things

3. Think about the good things

Now, do the opposite: Think about all the good things that could happen. You could hit a perfect shot! You could hit a bad shot that turns out well! Just like the bad outcomes, the good outcomes are real. Acknowledge that they’re a possibility. For the final step, go back to your negative list and reframe each of your worries in a more producti ve way.

I’m worried about playing poorly, for instance, becomes: How can I better prepare myself to improve my chances of playing well?

I don’t want to slice my ball into the water could turn into How can I maximize my chances of avoiding the water if I hit a bad shot?

They may sound like small tweaks to your mindset, but they’re essential ones. The kind that the very best make in order to play at their best. And they’re tactics you can use, too.