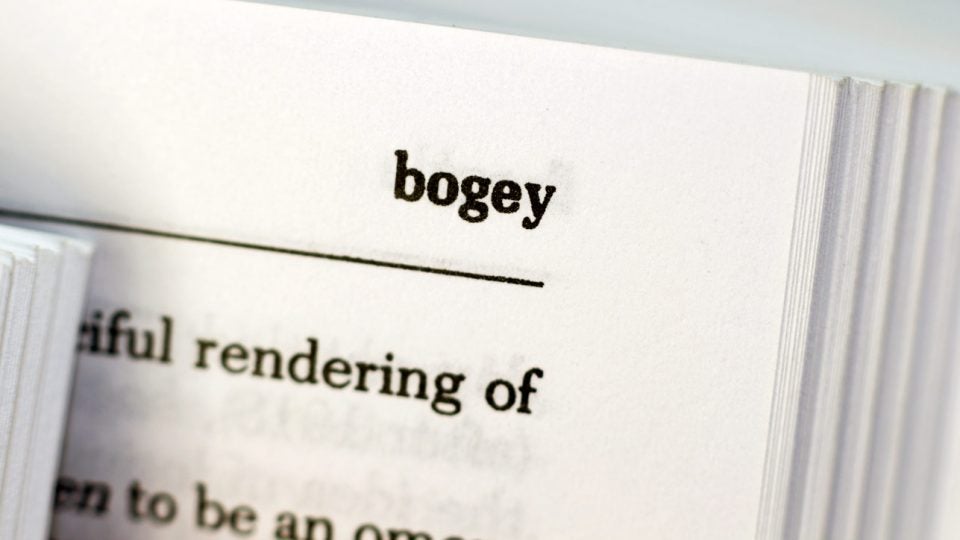 You could fill a dictionary with golf-specific terms. We explain the most common ones below.
Getty Images

You won’t be a scratch handicapper the first time you pick up a club. (If you don’t know what “scratch handicapper” means, keep reading, you’re in the right place!) Similarly, a beginner can’t be expected to know all the golf terms and lingo used throughout the game (let alone the numerous comedic golf terms you can read about here).

The problem is that most people have to embarrass themselves in front of friends or colleagues in order to learn it all. That’s exactly why we’ve created this guide to the most common golf terms used by recreational and pro players alike.

It won’t make you a golf expert, but if you spend a little time learning the following golf terms, you’ll save yourself from any red-faced moments during your first trip to the links (see below for definition).

Let’s start simply with the golf terms “par”, “birdie” and “bogey”. All three of these golf terms refer to scoring.

“Birdie” and “bogey” are simple once you understand the concept of par. A player makes a “birdie” when he uses one fewer strokes than the par of the hole. If a player needs one stroke more than par to finish a hole, he makes a “bogey.” So, if you finish a par 4 with only 3 strokes, you make a “birdie”, but if you take 5 strokes to complete a par 4, you make a “bogey”.

Players often keep their cumulative score for an entire round by tracking how many shots over or under they are relative to par. If a golfer makes two pars to start a round, he is “even par” for the round. If a player opens with two birdies, he is “two under” for the round. If a player makes two bogeys to start a round, he is “two over.” Similarly, if a player makes a birdie on the 1st hole and follows it with a bogey on No. 2, he is “even par.”

What does ‘ace’ mean?

An “ace” is one of the most coveted accomplishments in the golf. It is simply an alternate golf term for “hole-in-one“, which is when a player needs only one shot to get his ball in the hole.

Virtually all “aces” or “holes-in-one” occur on par 3s. That’s because all players are expected to reach the green on par 3s with their tee shot (the first shot on the hole from the teeing ground). If it happens to not only hit the green but actually roll into the hole, you have earned yourself an “ace”. Occasionally, a PGA Tour player makes an “ace” on a short par 4, but they are exceedingly rare.

What does ‘fore’ mean in golf?

“Fore” is what golfers yell when their golf ball is flying dangerously close to another player.

Basic golf etiquette demands that you wait until the golfers in front of you are completely out of the way before hitting your shot so you don’t hit them with your golf ball. But if you hit a wild shot that flies toward golfers on other holes, bystanders, or spectators, you must yell “fore” loudly to warn them about the incoming ball.

Like many other golf terms, the origin of “fore” is not entirely known. There is no doubt that it was first used in Scotland, where the game of golf was invented, even as early as the 1850s. But there is disagreement about where it came from.

Some think it comes from the golf term “forecaddie”, which is a person that stands in a forward position on each golf hole to pinpoint where the players’ balls go. “Forecaddies” are often in the line of fire and need to be warned when a ball is flying toward them.

The other potential origin comes from the British military. Artillery men used to shout “beware before” in advance of firing their cannons in order to warn their fellow soldiers standing nearby. It’s thought that golfers adopted this tactic for wayward golf shots but shortened it to the golf term “fore.”

What does ‘links’ mean?

“Links” refers to a specific type of golf course and, frequently, the style of golf that is played on those courses (“links golf”). “Links” golf courses are noted for the firm, tightly-mowed grass that covers the course and the naturally undulating and rumpled ground they are built on. In addition, links courses rarely have trees or water hazards , replacing them with deep sand traps known as “pot bunkers”. Links courses are also usually located on ocean coasts, where strong, changing winds play a major factor.

What does ‘albatross’ mean in golf?

One of the best golf terms around, “albatross” refers to when a player uses three fewer strokes on a hole than the par for that hole. There are only two ways to make an “albatross”. First, you can hit your second shot in the hole on a par-5. Second, you can make a hole-in-one on a par-4. Do either and you will go three under par on a single hole (and win bragging rights among your golf friends forever).

What does ‘mulligan’ mean in golf?

A mulligan is a golf term that only applies to recreational golfers. Sometimes (and sometimes often) amateur players will hit a poor drive on the 1st hole, whether it is due to nerves or failing to warm up properly. Rather than start off on a bad note, golfers in casual games will sometimes “take a mulligan” and re-play their first shot with a new ball without counting the original bad shot.

“Mulligans” are technically against the Rules of Golf, but golfers frequently make use of them, as long as they aren’t playing a tournament or otherwise serious match. Often a golfer will suggest or give permission to his playing partner to take a mulligan, but other times the golfer will choose to take a mulligan without consulting his playing partners.

Where does the term ‘golf’ come from?

Now we covered a number of basic golf terms, but what about the term “golf” itself? The origins of golfers’ favorite four-letter word are not entirely clear, but it certainly appeared first in the country where the game was created: Scotland. Many believe it is derived from the Scots-language word “goulf”.

Handicap: A handicap is a measurement of the average number of strokes over par a particular golfer makes during a round on an average golf course. So, a person with a handicap of 15 is expected to shoot a score of 87 on a par-72 golf course of average difficulty. A 5-handicapper is expected to shoot a 77 on the same course. Handicaps are used to adjust scores in amateur matches to level the playing field for players of different skill levels.

Scratch: A “scratch” golfer is a golfer with a handicap of 0. These expert golfers are expected to shoot even par or better on most golf courses.

Yips: A condition in which a muscle spasm or mental block prevents you from performing a simple golf task. Most often it’s associated with putting. Players with the putting yips will make an uncontrollable jerky motion in their putting stroke that results in a poor putt. Attempts to cure the yips are often fruitless.

Shank: A “shank” is a severely mishit shot, when instead of making pure contact with the golf ball, you hit the ball off the neck, toe, or heel of the club resulting in a wild, short and often embarrassing shot.

Slice: A “slice” is when your golf ball curves severely to your strong side (right side for righties, left side for lefties), tailing or “slicing” away from your intended target. It is one of the most common and frustrating swing faults, usually caused by an outside-in swing.

Slope: “Slope” is a golf term that measures the difficulty of a golf course for the average bogey golfer. Essentially, it attempts to measure how much harder a course is for a normal golfer compared to an expert golfer. Slope ratings run on a scale from 55-155. 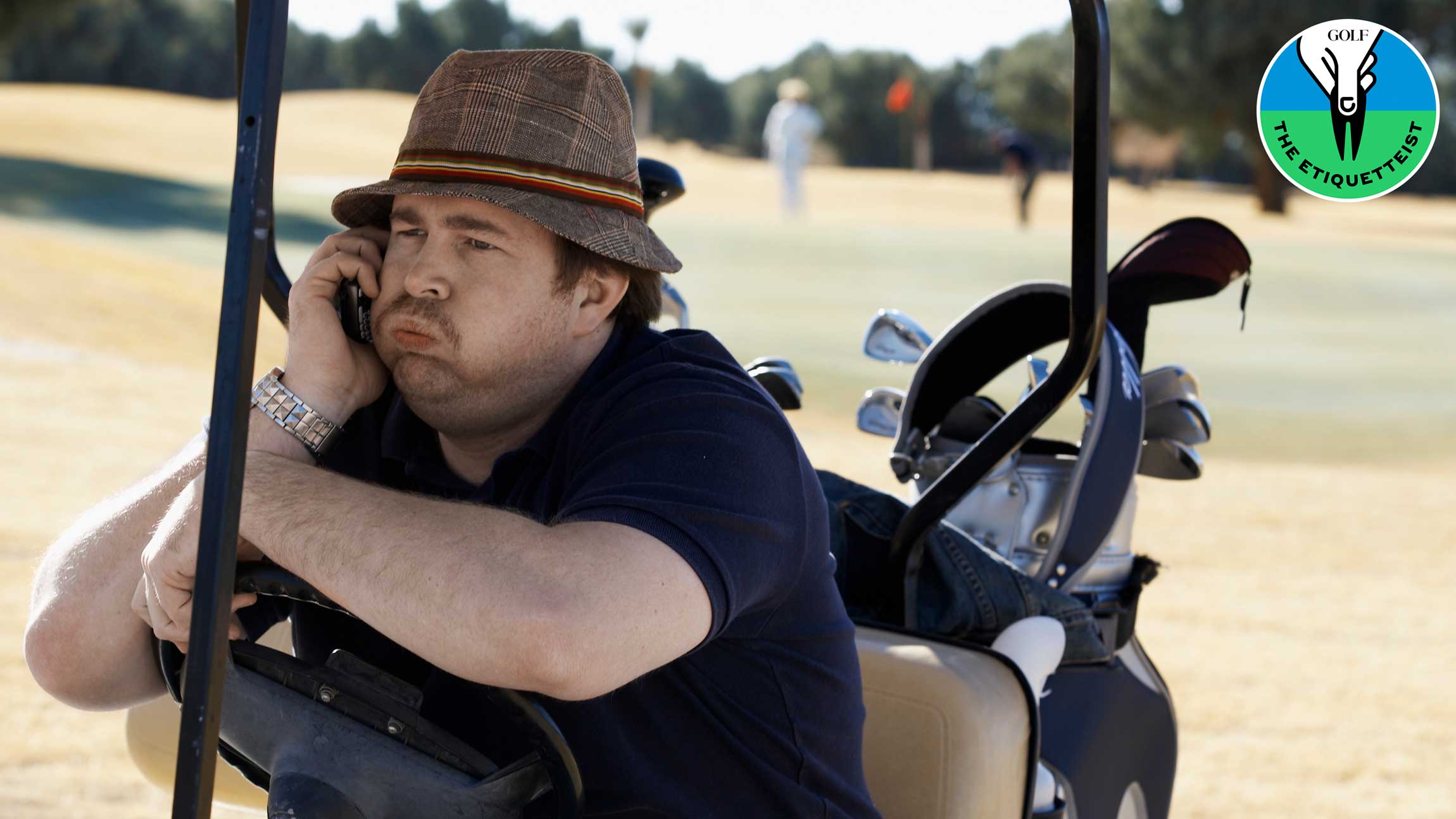 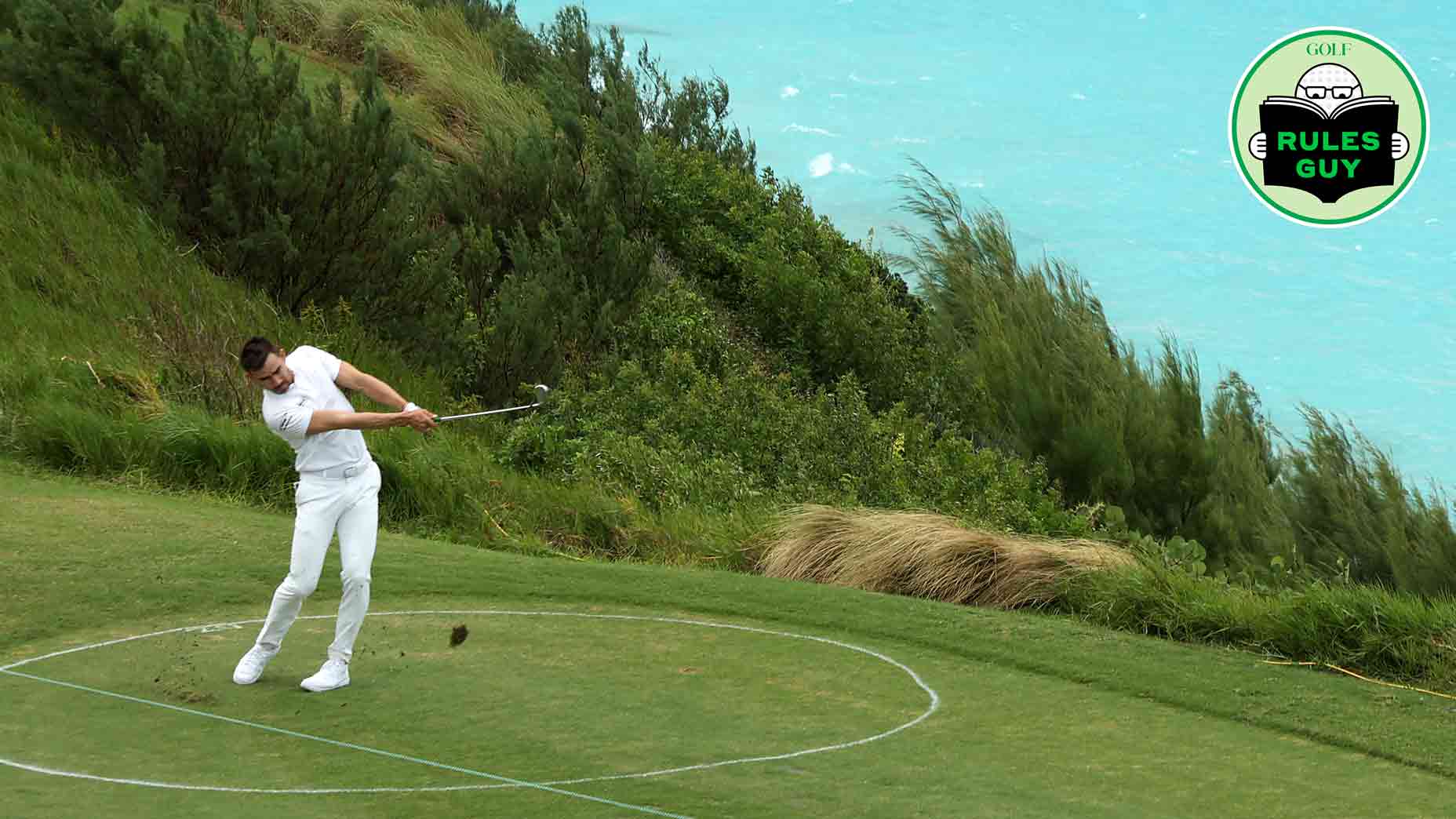 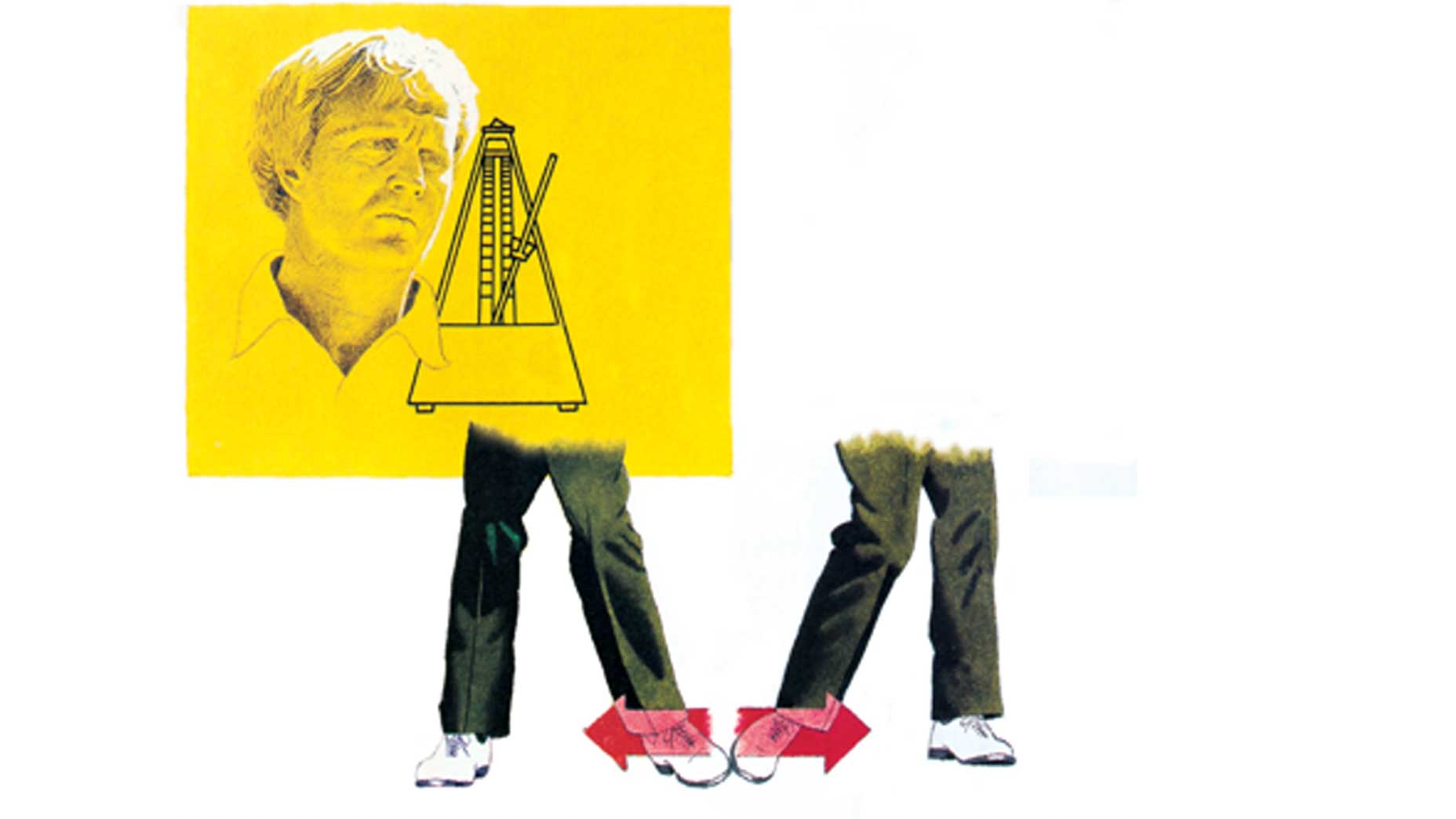 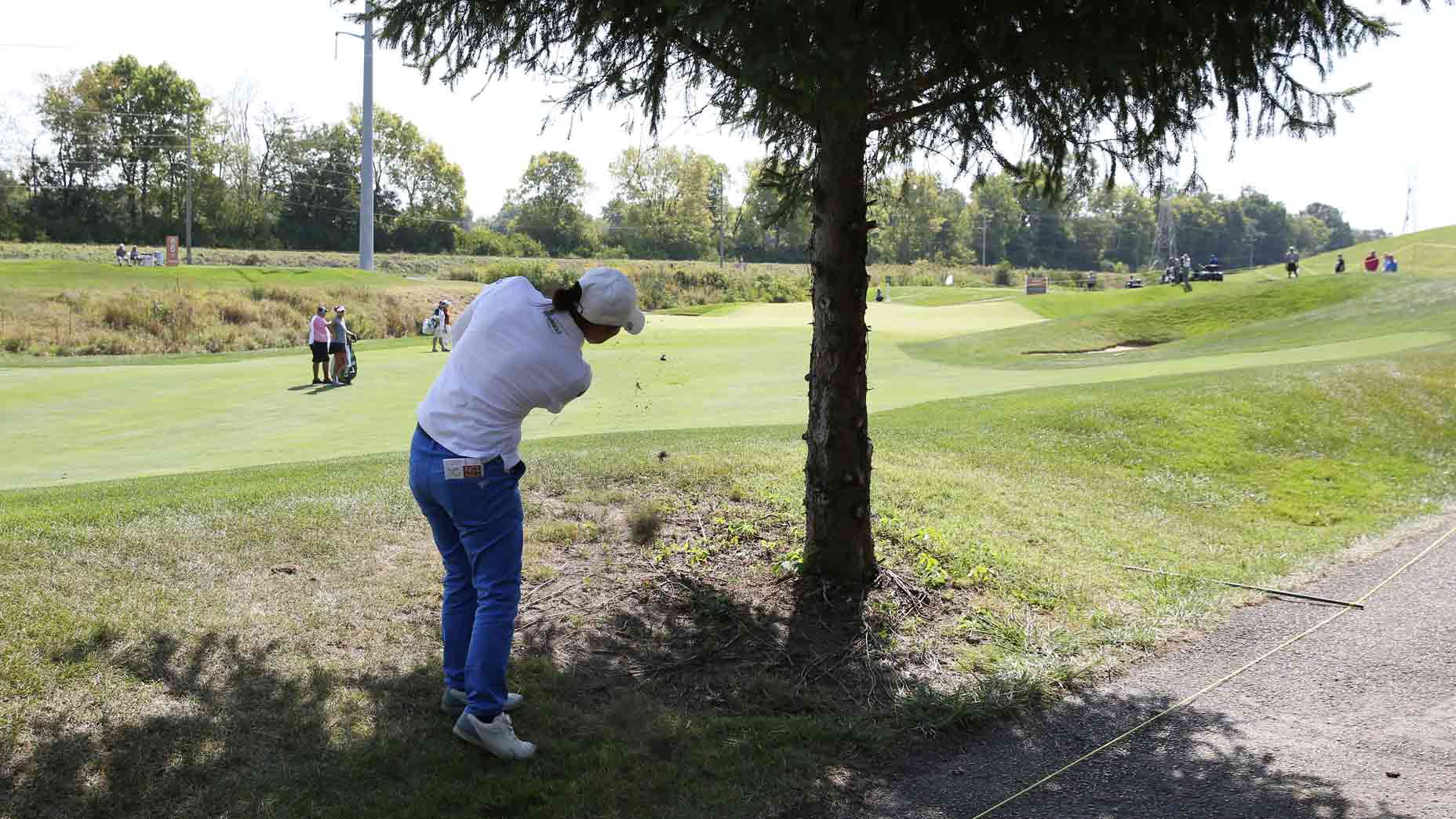