The two most important things you can learn from Brooks Koepka’s diet, according to his personal chef 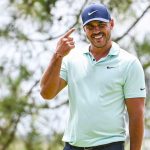 Brooks Koepka keeps it simple when it comes to his diet and nutrition.

These are all words that have been used to describe Brooks Koepka in the past, and they all have their merits.

Big: The numbers don’t lie. Koepka is 6’0 tall and weighs 205 pounds. That’s the opposite of small.

Bad: On the course, Koepka’s no-nonsense attitude has resulted in an incredible resume including four majors and six Top 5 finishes in majors.

Strong: It’s a bird! It’s a plane! No, it’s Koepka’s smashed golf ball flying 309 yards on average off the tee. It takes serious strength to mash drives and chop out of thick rough the way he can.

While all of this is impressive no doubt, especially to us mere mortals, it wouldn’t be possible without the right fuel.

One of the most under appreciated aspects of any Tour player’s success is their diet. And for Koepka, his diet and nutrition on and off the course are essential for his ability to train, recover, and perform when he needs to most.

That’s where his personal chef, Noel Grob (a.k.a. Chef Nogee) comes in. Armed with a license in Health and Dietetics, Grob has worked with Koepka’s team to produce a diet that is tailored specifically to him.

What’s surprising is that Koepka doesn’t eat as much as you’d think. “He doesn’t have a big appetite,” Chef Nogee told Golf.com “He really doesn’t snack that much on the course at all.”

It’s a high-protein, low-fat diet that is broken down as follows:

Although we regular weekend hackers don’t have private chefs, there are still a few things we can learn from Koepka’s carefully crafted diet.

1. Keep it simple and balanced

When it comes to cooking for Koepka, Chef Nogee knows her audience. Koepka isn’t a big on huge meals, so she cooks up lots of healthy meals and snacks to meet his goals. She keeps the ingredients simple: lots of salmon, chicken, and other high quality protein sources.

He doesn’t eat a lot of sugary snacks, but that doesn’t mean Koepka can’t indulge every once in a while either. “Brooks pretty much has a very balanced diet,” she said. “It’s simple. It’s not overcomplicated. We don’t really refrain from much. He doesn’t really have sugar, but every now and then, he’ll have pizza.”

All of this to say that balance and simplicity are key to any good diet, and are things you should incorporate into the way you eat as well.

Chef Nogee was pretty adamant about her second piece of advice: “Add more protein to your diet.”

She actually recommends eating one gram of protein per pound of body weight, which is why Koepka who weighs about 205 pounds, eats 200 grams of protein a day.

Eating more protein, while good for helping your body recover after a long day on the course, will also help you feel full for longer. That means you’re less likely to overindulge in the bad stuff we all are guilty of eating too much of at times. It also means it can help you maximize your gains and help you trim down a bit if that’s your goal.

If you’re serious about adding protein to your diet you can even give Koepka’s favorite protein-packed snack a try. Just follow Chef Nogee’s recipe below:

Mix all these ingredients together, form the mixture into spheres and refrigerate until solid.

While you probably won’t be able to hit 300+ yard drives like Koepka, you can adopt his simple yet balanced approach to nutrition to help you feel and play your best on the course.