Rory McIlroy vs. Bryson DeChambeau: Pound for pound, whose length is more impressive? 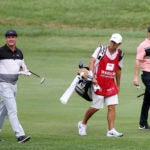 Despite these differences, the two golfers have one thing in common: They are two of the longest hitters on Tour. Bryson and Rory are No. 1 and No. 5 in strokes gained: off the tee.

However, Rory is notably smaller than Bryson, and even admitted at the RBC Heritage that he feels his best at a lean 155 pounds. That difference begs the question: Is Rory’s distance at only 155 lbs more impressive than Bryson at 240 lbs?

Top 100 Teacher Jonathan Yarwood: Pound for pound, you could easily argue that Rory is getting more out of the motor. Rory is a master class in controlled and sequence utilization of physics wrapped up in an artistic and poetic package. It’s a joy to watch the effortless, fluid power he generates. Bryson and Rory both have great physics. They both weight and unweight their feet, push into and load the ground, create torque and rotation along with huge vertical forces. But one does it with grace and beauty which may have longevity and the other more agriculturally. Both work, but Rory has a better smash factor than Bryson which gives you an idea of the quality of delivery and the efficiency of how he moves that slight frame.

Performance Coach Kolby Wayne Tullier: While I am truly impressed with Bryson’s commitment to what he has done, the numbers speak for themselves. But if I was impressed by only one, it would be Rory being 155 compared to 240. It shows how efficiently his body has to function to create the speed and power he produces. In the training world strength is the easiest to achieve, but a functional, supple, dynamic athlete on the other hand is not, and Rory has it all.

Dr. Greg Rose, Titleist Performance Institute (TPI):  If you’re creating centripetal acceleration like we do in a golf swing, you have to counterbalance. In order to counterbalance, you’ve got to be able to pull back. You’ve got to be able to pull back at almost 200 lbs to get a club to go 150 mph. To me, if I look at Rory’s mass at 155 lbs and Bryson’s mass at 240 lbs, if they can both move the club at the same speed, for a smaller guy to be able to pull back as strong as a bigger guy, I think that’s more impressive. At Bryson’s size and strength, it might be easier for him to do this which is one of the reasons why he’s able to bring his speed to tournament play.

Dave Phillips, TPI: What can’t be overlooked is how impressive it is that Bryson has been able to put these changes into play so successfully and so quickly. In a four to six week period, this guy changed his body, changed his golf swing, increased his speed and then was able to go out on the golf course and in two tournaments has finished in the Top 10. That’s unbelievable.

There’s no denying that what Rory and Bryson are able to do with a golf ball is impressive. You can see them go head-to-head in the second round of the Travelers Championship. They tee off alongside Phil Mickelson at 1:40 p.m. EST.