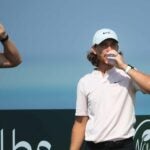 Soda isn't the best thing you could drink on the course.

Sweet, fizzy, refreshing on a hot day. Soda is delicious. However, if you’re the type of person whose go-to order from the beverage cart is a bottle of Coca-Cola, Pepsi, Sprite or some other variation of this sweet elixir, you might be doing yourself (and your golf game) more harm than good.

What’s so wrong with a mid-round pop?

1. Soda causes a spike in a blood sugar

Whether or not you feel it, soda contains a lot of sugar. One 12-ounce can of Coca Cola has 39 grams of sugar. That’s a lot! In fact, that’s more than American Heart Association’s daily recommended intake for men (36 grams) and women (24 grams). Not only does one can of soda more than take care of your daily sugar intake, but once you consume that sugar, your blood sugar will spike which can have a negative impact on your game.

If you’ve ever heard the pros talk about what they eat on the course, they almost always say their snacks include carbs, fat and protein because this complete combo of macronutrients helps give them energy without the negative side effects that a sugar rush brings, namely the fatigue and headaches that come with the inevitable crash.

2. Drinking too much soda can cause dehydration

On a hot day on the course, you can lose at least 2.5 liters of water through sweating. If you’re drinking soda, you’re probably not drinking water. Obviously, soda will not hydrate you the same way as water. But did you know it can actually dehydrate you faster?

That’s because most sodas have caffeine which acts as a diuretic and causes you to lose water faster. Soda also tends to have high levels of sodium. Consuming too much sodium can cause your body to pull water from cells, further dehydrating you. Dehydration can have nasty side effects including headache, fatigue, blurry vision, irritability and more, meaning you won’t be able to play your best.

Buy a new water bottle from our Pro Shop 3. Soda can weigh you down over time

A 20-year study from Harvard University of 120,000 men and women who consumed sugar-sweetened beverages like soda showed that people who drink soda frequently are more likely to gain weight over time. While this might not have an immediate impact on your golf game, it can affect you down the road.

The goal is to enjoy playing this game for as long as possible, which means paying attention to your health and making good choices now so you can stay on the course in the future. An expanding waistline can also throw off your swing mechanics. It’s hard enough to swing a golf club well repeatedly, so why make it harder by guzzling soda?

This just scratches the surface of what drinking soda can do to your body, so next time the beverage cart comes around, rethink your order. If you really love the bubbly aspect of soda, try a flavored seltzer water. It has some of the same sweetness because of the flavor and it will help hydrate you to boot. Good old water is also a great option, and if you bring your own you can infuse it with your favorite fruit flavors if you still crave that hint of sweetness.

Either way, swapping your soda out for a healthier option will not only help you feel better but will also help you play better on the course, and that’s what it’s all about.