One ‘disturbing’ habit holding back amateur golfers from getting better, according to a top teacher 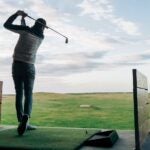 Want to get better? There's one habit to get rid of.

Full disclosure: When GOLF.com writers and editors were picking which Top 100 speakers they were going to cover while at Pinehurst this week, I jumped at the opportunity to sit in on Matt Killen’s presentation. Why? The headline spoke to me: How to practice productively, tee to green.

Killen, 36, started coaching at age 18 and just a couple of years later was already balancing teaching sessions with college classes. Now he’s helping some of the best golfers in the world.

Now, about me: I started the year as a 17 handicap, had some lessons and moved to a 15. Now, I’m anxiously inching closer to a 14, with dreams to get that number even lower. So I thought Killen’s subject spoke equally well to both pros and high-handicappers. I figured it would be a great session where I could learn and, in turn, write about for our readers. So, what did I take away from his 45 minutes? Accountability.

Besides the bevy of stars Killen teaches, he also has many younger students. He told the story of one, whose dad reached out to Killen to say he was worried his son wasn’t practicing enough on his own. Killen had a solution. He told the teen to send him a time-lapse video of all of his practice sessions, or he wouldn’t teach him.

It worked. The boy hasn’t missed a lesson in 2 1/2 years, and that story is a small detail in the larger picture. “Most players don’t have a clue how to practice,” Killen says.

Students can receive unlimited world-class instruction, but if they don’t put in the time — and have their teachers hold them accountable — they won’t get better. As Killen notes, pro golfers are their own CEOs. They don’t answer to anyone. The same goes for recreational players trying to get better; it’s up to them to put the time in too.

Killen was asked what he might find most infuriating if he visited a local driving range. (His answer, unfortunately, spoke to me, who just a day earlier was in a hectic scramble to warm up 15 minutes before a round.)

“I want them to know what are you working on,” Killen said. “If the players don’t know what they are working on, that’s disturbing on a lot of levels. When I go to a driving range, I see so many people who don’t have a plan.”

So, how do you practice with a plan? First, you need to understand the different types of practice, says Killen. There’s mechanical practice, which he says is working on a specific change with a goal to change a pattern. In the beginning stages you should not judge the result; just work on the process.

Then, there’s performance practice — where you’d attempt to execute a shot as if you were playing a match or in a tournament. This is where you have a chance to test yourself.

As Killen notes, the best players in the world have a thought-out, precise plan. And golfers, even high-handicappers, should too. It doesn’t matter if they aren’t going to play on Tour; they can’t get better until they identify how they want to get better, develop a smart plan (with the help of a coach) and, lastly, actually put in the work to improve.

Killen said golfers can maximize improvement no matter how much time they have, and they can do it at home if they don’t have time to get to a range. If they only have 20 minutes, then there are ways to make the most of those 20 minutes. It’s just the process of setting goals, achieving those goals and making your time valuable and productive.

He said one thing he likes to do with his students is have them provide feedback of what they took from each practice session — he used pro Emma Talley’s texts messages as an example — and he’ll read what they say before he replies with his notes. It’s a way for players to think critically of their game — it’s accountability.

Earlier in Killen’s presentation, he mentioned a quote he’s long been fond of: “Ideas are worth nothing; it’s the execution of the idea that’s valuable.”

For more from Killen, check out the video below.