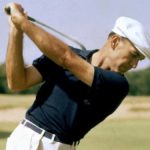 The PGA TOUR is back in action and I am fortunate enough to be a small part of the fray.

It was so special, and a little emotional, to walk the fairways of Colonial Country Club for for the Tuesday practice round of the 2020 Charles Schwab Challenge. Greeting players, watching golf balls fly and walking the fairways that The Hawk, Ben Hogan, walked was a fun, and spiritual experience.

In fact, on the 5th hole (the final hole in the three hole stretch know as “The Horrible Horseshoe”) I was standing in the fairway watching Jordan Spieth. He was playing in an all-Texan group including Ryan Palmer, Franklin Corpening and Kramer Hickok. Out of the blue a Red Shouldered Hawk flew overhead at pretty low level. Corpening looked up at the raptor and then looked over to me and said: “There’s The Hawk; he’s watching over us.”

I felt Hogan’s presence and I imagined how he would navigate his way around a windy “Hogan’s Alley”.

Ben Hogan was an icon. His name synonymous with perfection, his life-story is a source of inspiration to many a golfer, including myself.  Indeed “Ben Hogan’s Five Lessons: The Modern Fundamentals of Golf” is the first golf book I ever owned. Dog-eared and littered with notes and highlighter marks of mine, it still speaks to me whenever I open it.

Golf swing expertise aside, Ben Hogan had a “Golf IQ” and wisdom about him that was off the charts.  He never said very much, but when he did speak every statement was measured, well-though out, loaded with insight, and highly quotable:

Consider a few of Hogan’s quotes to help you to play better golf.:

“There are no shortcuts in the quest for perfection.”

“You only hit a straight ball by accident. The ball is going to move right or left every time you hit it, so you had better make it go one way or the other.”

If I may be presumptuous I would like to help you read between the lines:

“There are no shortcuts in the quest for perfection.” It is imperative to understand there is not a “Holy Grail” or magical swing-tip when it comes to improving your game. Hogan spent a lot of time in his writings addressing fundamentals like the grip, alignment, ball position and posture.  He spoke about the “waggle” and its influence on the golf swing. In short, he never hit a shot without ensuring that all of the pre-shot elements were addressed and on-point.  My goodness, he even said he “dug his game out of the dirt”.

That speaks to constructive and hard work.

“You only hit a straight ball by accident. The ball is going to move right or left every time you hit it, so you had better make it go one way or the other.” I see so many golfers on the lesson tee who want to hit the ball dead straight. The reality is this just does not happen. Launch monitors have effectively proved that.  In my opinion, a number of golfers mistakenly equate a shot that ends close to the target with a “straight” shot.  So… instead of trying to handcuff yourself by making the ball go straight, commit to bending the ball consistently in one direction – it will make aiming infinitely easier.

Do yourself a favor and look up a few of Hogan’s statements.  Consider them carefully. Mine every bit of information out of them.

Imagine you are walking the fairways with The Hawk and let him teach you, not just about the golf swing, but about how to approach and play the game.  You will be rewarded.

And here’s one more:

“This (golf) is a game of misses. The guy who misses the best is going to win.”