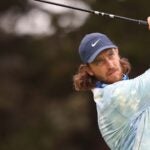 Tommy Fleetwood is among the game's best ball strikers.

Tommy Fleetwood is among the best ball strikers in golf. The Englishman consistently ranks in the top quarter of PGA Tour players in various ball striking metrics, and his rank in SG: Off-the-Tee has been among the tops in the game.

His journey to becoming an elite ball striker was not always a smooth one. Fleetwood first reached the top 50 in the Official World Golf Ranking in 2015, but a year later he lost his touch and his game cratered. So, he reunited with his old swing coach, got a new caddie and worked his way back, with an emphasis on solid ball striking.

Much of this elite ball striking ability can be attributed to his awareness of the clubface when it passes through the impact zone. Fleetwood makes it a point in his practice sessions to rehearse grooving the club through impact, creating elite awareness of his clubface angle. You can see him working on this in the video below.

This drill is only a half swing, but it forces Fleetwood to make a one-piece swing. Instead of the body, arms and wrist working independently, those three components are connected and work as one unit. This helps sync everything up and makes it easier to keep the clubface square through the impact zone.

Fleetwood’s drill is a simple one, but if you employ it and focus on making a one-piece swing, you will quickly improve your ball striking.