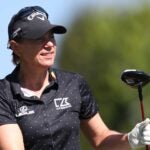 Annika Sorenstam watches a shot at the American Century Championship.

Annika Sorenstam officially retired from golf 13 years ago, yet lately she’s been fine-tuning her game for this week’s U.S. Senior Women’s Open at Brooklawn in Fairfield, Conn. Would her younger self have believed it had she been told back then she’d be playing again in 2021?

“No,” Sorenstam said. “Probably not.”

But here she is, teeing it up with some of her long-time friends and former competitors in the third playing of the event’s history. Ironically, the desire to start a family is what in part led to Sorenstam retiring years ago, and now it’s her kids that are somewhat responsible for her returning to the competitive game.

“There’s just a lot of pieces that made this happen,” Sorenstam said on Wednesday in her pre-tournament press conference. “I’m glad it made it happen. I do enjoy the game. I do respect the game, but it doesn’t mean that I’m going to play full-time anywhere in the country. This has been a busy year, but it’s great to be here, and I think it’s important to support the USGA because they’re the ones that put up this tournament.”

“The swing looks the same,” she said. “My game is not really the same, but I feel as good as I can be at this age and what I do in my life.”

“That’s one of the things I’ve learned — or maybe just matured, I guess, maybe is the right word — is learn how to forget bad shots and move on,” she said. “It’s not the end of the day. I’d be upset for about 10 seconds and then I’d move on to the next tee and something else pops in my mind. Before it would linger a little bit. We would sit there and try and figure out what can I do, and nowadays I don’t really do that anymore because life is precious and it’s not about my score so much anymore. Go out there, do my best. I’m still a fighter, still a competitor, and we’ll see what happens.”

As for first-hand accounts of Sorenstam’s game, she certainly impressed at least one playing partner earlier this month.

Vinny Del Negro, who recently won the American Century Championship, played a practice round with Sorenstam that week in Tahoe. He was blown away.

“She’s a machine,” Del Negro said on GOLF’s Subpar Podcast. “She didn’t miss a fairway. She was like, four yards left, four yards right. She can just hit it. Could not have been nicer. Talked the whole way. … In the practice round she birdied the first two holes. I think she hit the first one to like four feet, the other one to two feet. And I was like, wow. And the thing that’s crazy, let’s say she’s hitting 8-iron in there, and I’m hitting a gap wedge or a sand wedge. And I’m hitting it 20 feet and she’s hitting it four feet. But it’s just consistent. I was like, man, I got a lot of work to do to beat her. She makes it look easy.”

The U.S. Senior Women’s Open is Thursday to Sunday, with Sorenstam already off to a great start with a four-under front nine. You can follow all of the action here. The third and final round will both be broadcast on Golf Channel from 2-5 p.m. ET on Saturday and Sunday.