Gear Talk with Tom Kite: The first 60-degree wedge ever, birth of the K-grind, thoughts on bifurcation 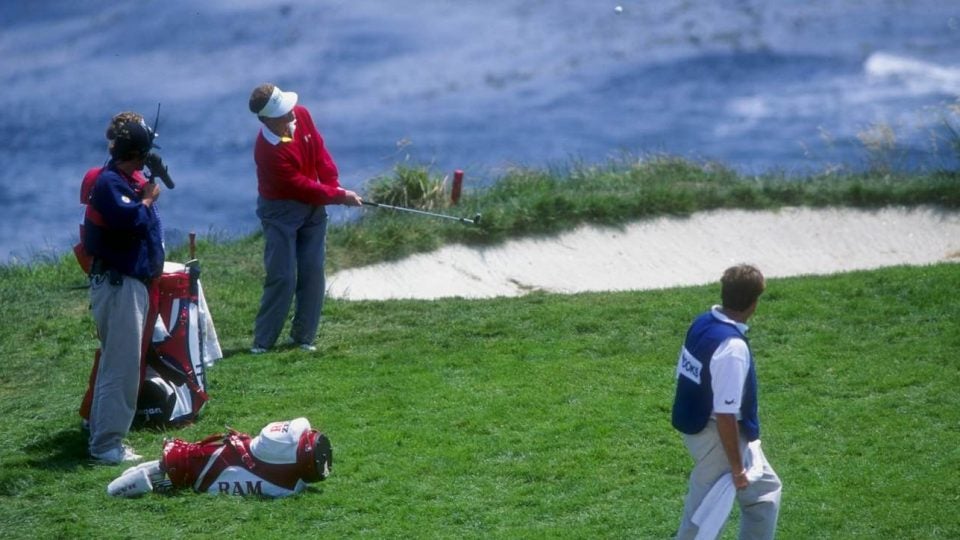 TUCSON, Ariz. — Ahead of the Champions Tour’s 2020 Cologuard Classic at Omni Tuscon National, GOLF.com caught up with the legend Tom Kite to speak about a number of interesting equipment topics. The full Q&A with the 19-time PGA Tour winner, 1992 U.S. Open champion and World Golf Hall-of-Famer is below, but first, a brief aside.

On the range at the Cologuard event, Titleist was launching its new Vokey SM8 wedges, allowing players to try out the new designs and get their proper fit. While sitting in on a wedge testing session between Kite and Master Craftsman Bob Vokey, I learned that the popular “K-grind” option is actually named after Kite himself.

As Vokey told GOLF.com on Wednesday, the original K-grind was developed in the early 2000s because Kite wanted a wider sole option that replicated an older Hogan wedge that he liked. So Vokey ground a Titleist wedge made special for Kite that Vokey referred to in-house as the K-grind. Later on, Jason Dufner was getting short game advice from Kite when Dufner took a liking to the K-grind.

Due to the interest in the K-grind with a wider sole, Titleist began offering the option in its TVD series of wedges. Also, Adam Scott won The 2013 Masters with a K-grind lob wedge, which certainly didn’t hurt the intrigue. Eventually, the K-grind became a staple in Vokey’s retail lines of wedges, and it remains in the SM8 lineup today.

Of course, I had to ask Kite himself about the backstory. The conversation didn’t stop at the K-grind story, however. Instead, it turned into a full question-and-answer session about a wide range of equipment topics. Kite discussed how he was the first professional to use a 60-degree wedge, why modern technology hurts longevity in golf careers, his take on the USGA and R&A’s recent distance report, rolling back the golf ball, and he explains why Champions Tour players tend to use older technology (in their irons) rather than new equipment.

Mr. Vokey just told me the story of the K-grind and how that came about. I was wondering if you could give me your side of that story? 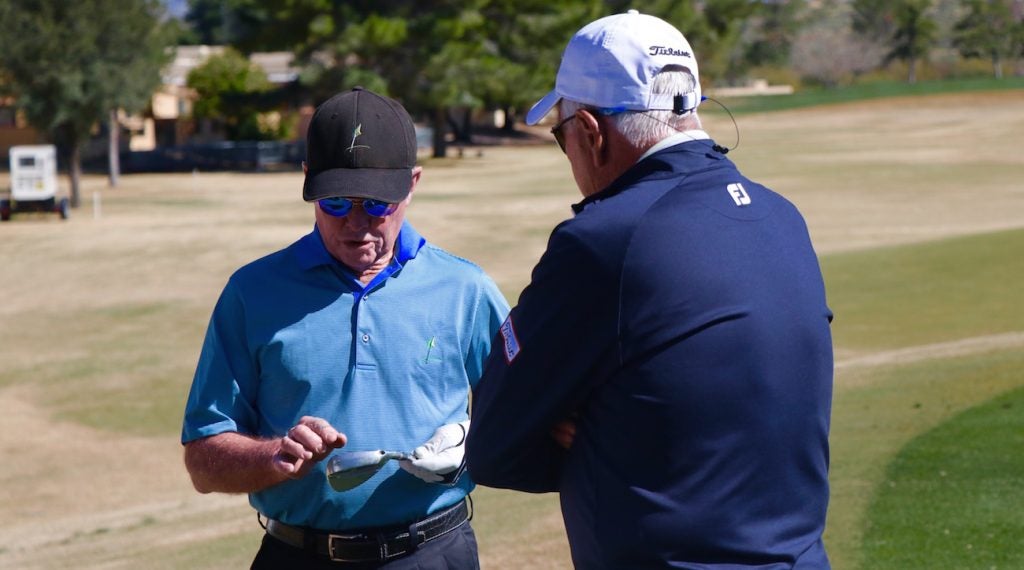 Kite: Well, I was the first one to go to the 60-degree wedge way back in 1980. I don’t want to say it revolutionized, but it certainly changed the game. I put it in the bag and I instantly became a better player. I didn’t know anything about clubs, except I knew what I needed in terms of loft and length to get the ball to go the distance that I wanted it to go. So I put that in the bag in June of 1980, and in 1981 I was the leading money winner. I didn’t finish out of the top-10 for years. So it was a good run based on that wedge. So immediately guys started copying it and putting a 60-degree wedge in – well, not immediately, it took them a couple years to catch on. But, it was pretty received. And obviously (Bob) Vokey caught onto it and shortly thereafter I was with Titleist. That’s when I put the K-grind in.

Now, you look around, nearly every single golfer has a 60-degree wedge. That’s pretty cool you started the trend.

Kite: Or more [loft]. I mean now, some guys have 64-degree wedges. Only 60 is kind of passé now. It’s not a big deal. But back in the eighties, a 56-degree club was the most anybody ever used. When I stuck [the 60-degree wedge] in, it was weird. It was cutting edge. Some people were anxious to see what happened, and other people were saying, ‘Ah, this is the stupidest idea ever.’

Do you think there’s any merit to the idea that new equipment helps extend longevity for a golf career?

Kite: No, I would think if anything it’s doing the opposite. I think it’s doing the opposite because what’s happened is that it creates a bigger differential between those with speed and those who don’t have speed. We simply see it at the amateur levels; the amateurs have not gained much distance. And yet the touring professionals, they can swing it north of 115 mph and have gained significant distance. Well, you have to follow the same logic. When someone says longevity, most guys at the end of their career start losing distance and speed — although Phil Mickelson is doing an amazing job of maintaining his. Bodies get older. So if older players are going to continue to lose speed, well then it’s going to make it significantly harder for them to compete against guys in their twenties who already have speed.

Same thing is true out here (on the Champions Tour). A guy turns 50 years old, you’ve got 6-10 years to make hay, but after that point, your body starts to break down. Once it starts to break down, now you lose speed. Now you haven’t gained as much distance as the guys that are hitting it longer. So I think it does just the opposite. I think the guys are playing longer because they’re maintaining their fitness. They’re paying attention to their health so they’re able to play longer. But I think the equipment, in terms of increasing longevity, I think it’s going to opposite way, because you’re not able to complete with the guys who have speed.

Now, with the older equipment, you still lost distance but you didn’t have the guys that were so long. When Nicklaus was the longest, he averaged 280 yards. Now you have guys averaging 315 yards, that’s 35 yards difference. Then the second shot is at least another 15-20 yards. That’s almost 50 yards a hole. That’s essentially 900 yards over 18 holes. We used to play 7,000-yard golf courses. Add 900 yards to that, they ought to be playing 8,000-yard golf courses. When they play a 7,500-yard golf course, no wonder they’re hitting wedges. It’s like us playing a 6,800-yard golf course in 1970 and 1980 with the old equipment – really anything prior to 2000. The metalwoods had an effect but it was the ball that really changed everything in 2000, when the Pro V1 and other similar balls came out. That changed everything. Right now, the guys don’t hit a lot of clubs. They need five wedges, a driver, maybe a 3-wood because they can’t hit driver off the tee on a lot of holes, and maybe a hybrid. Basically they can play with six clubs… OK, maybe eight clubs.

Would you be a fan of bifurcation or “rolling it back” then?

Kite: Well, I’m not a fan of bifurcation, for sure. From my view point, the thing that was most revealing about the report that came from the USGA and the R&A is that we need to sustain golf. We need to make it more sustainable. There’s no question that a 6,800-yard golf course is more sustainable than an 8,000-yard golf course. That just makes sense, you don’t even need to explain it. It’s less, less, less. Less cost, less land, less water, less everything.

Of the comments that I’ve heard from the PGA Tour, the one person who picked up on that was Rory McIlory. Smart kid. Really smart kid. I have so much respect for him because he picked up on that we have to make it sustainable. What is the way to do that?

I understand [equipment companies] are trying to sell product, but I think for the sustainability of the game that’s what we need to do.

Q: One more question… When I go up and down the range here, I see such a mix of modern equipment and then stuff from, say, 14 years ago, whereas you don’t see that as much on the PGA Tour. 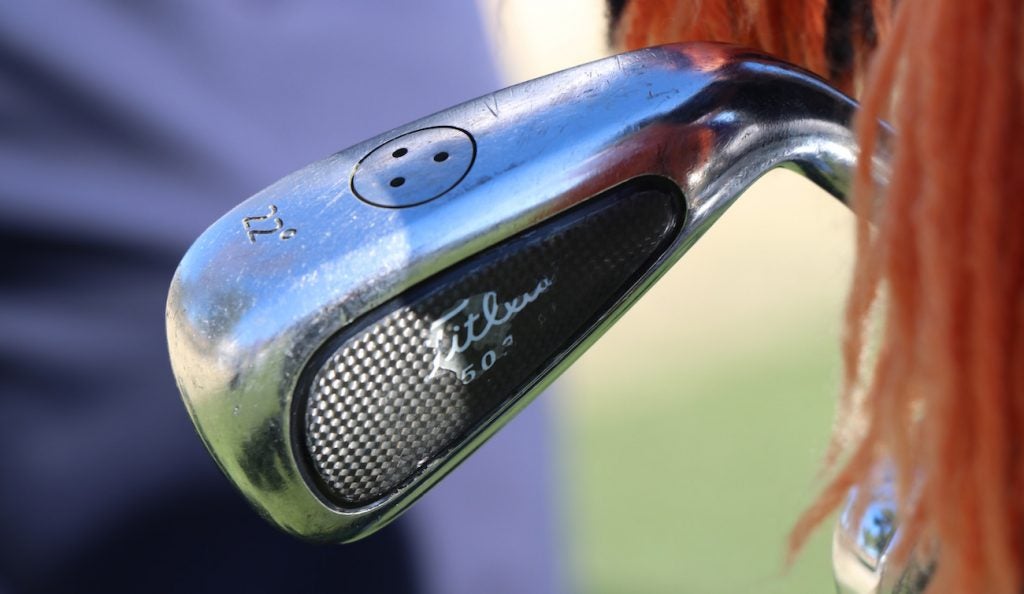 Kite: You see this right here (pointing to the Titleist 503 hybrid in his bag, as pictured above)?

I saw that. What is it about you guys not wanting to change into modern equipment? You could make a case that the new equipment is better, more forgiving, longer.

Kite: Maybe. I think it’s more of a control game out here. It’s not about hitting a 4-iron 300 yards. It’s about making the ball fit in there and go the right distance. So having a face that rebounds in an iron makes very little sense to a lot of the players out here.

Years and years ago, Wilson came out with a club called “Reflex” back in the seventies. It had a slot and it was the first rebounding face, and it went further. The problem is, if you hit it right in the center, the face rebounded a lot. If you hit it [off center], you didn’t get as much rebound. So if you hit it on the toe or on the heel, you didn’t get the same amount of kick and you didn’t pick up as much distance, so you had a bigger dispersion. Well, in an iron, that’s terrible.

On a driver, you’re trying to go for max distance. On a 3-wood you’re trying to go for max distance in most cases. So you can afford to have some dispersion on those two clubs. But everything else in the bag is – it’s somewhat about distance – but it’s a whole lot about distance control. Nobody would ever want a slotted face on a wedge. Can you imagine hitting a 60-yard shot or a 30-yard shot with a face that rebounded? It would make no sense. 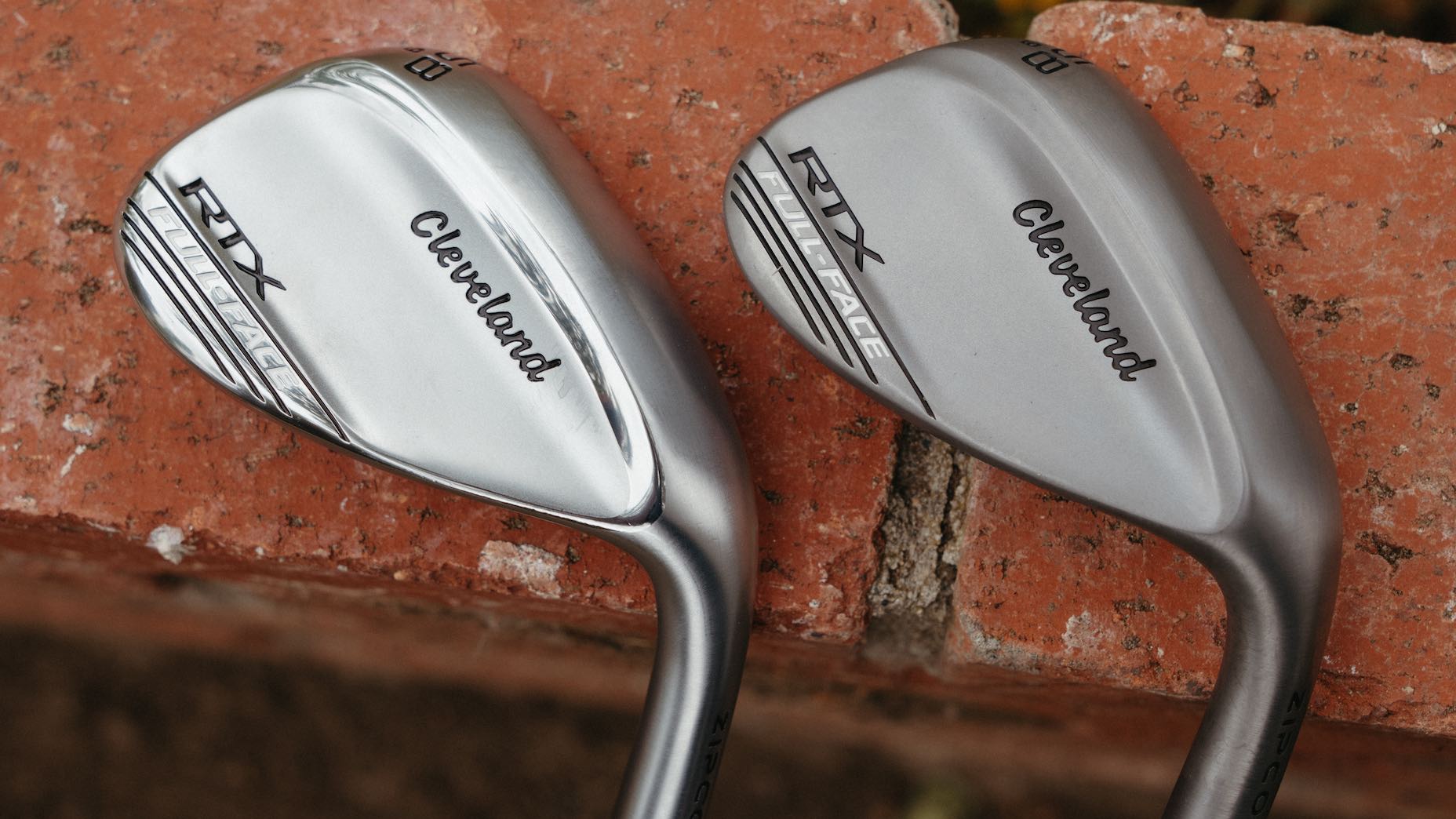 Gear Questions You’re Afraid to Ask: How do I know what type of wedge to use? 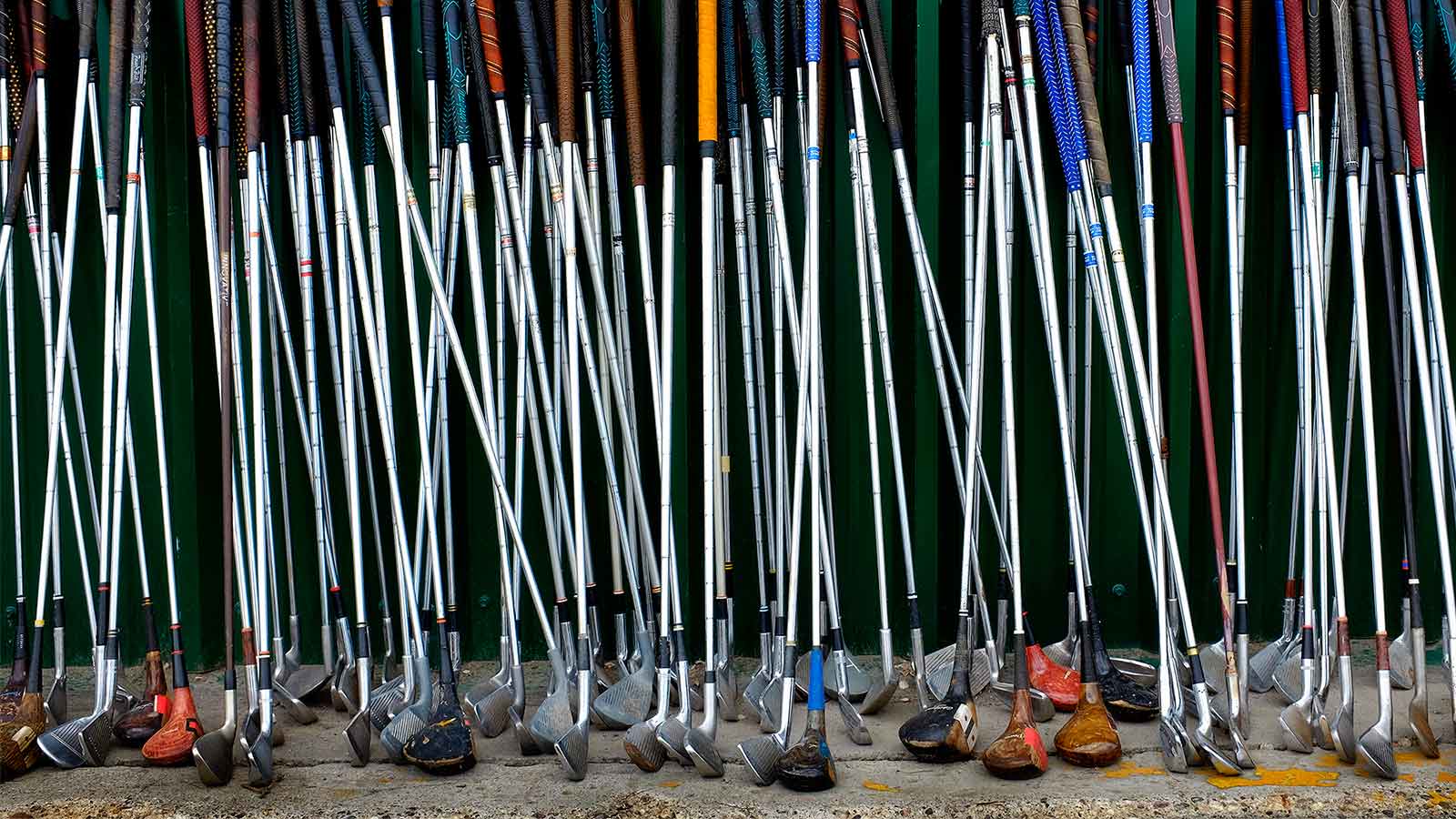 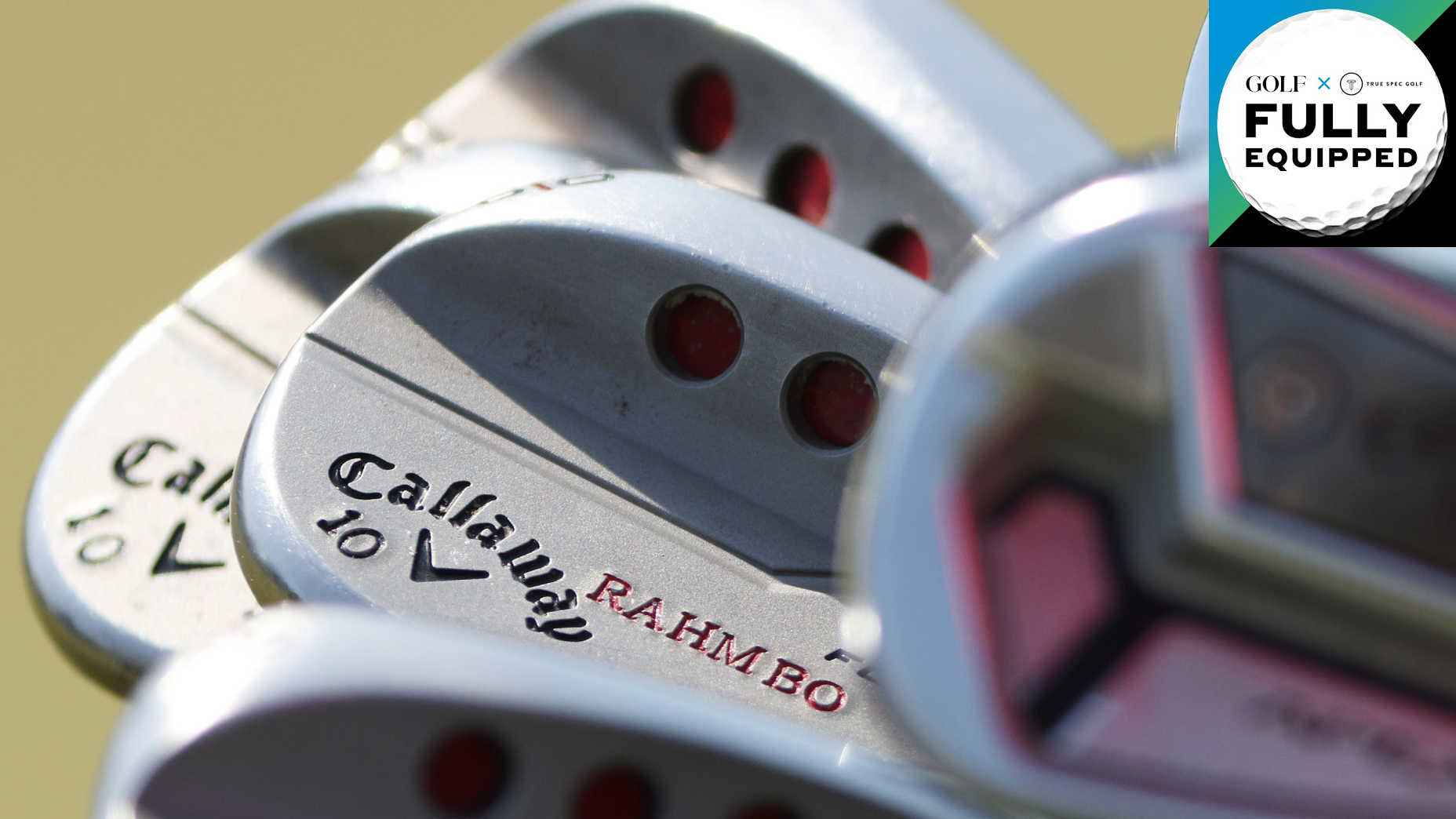 3 basics every golfer needs to know about wedge grinds 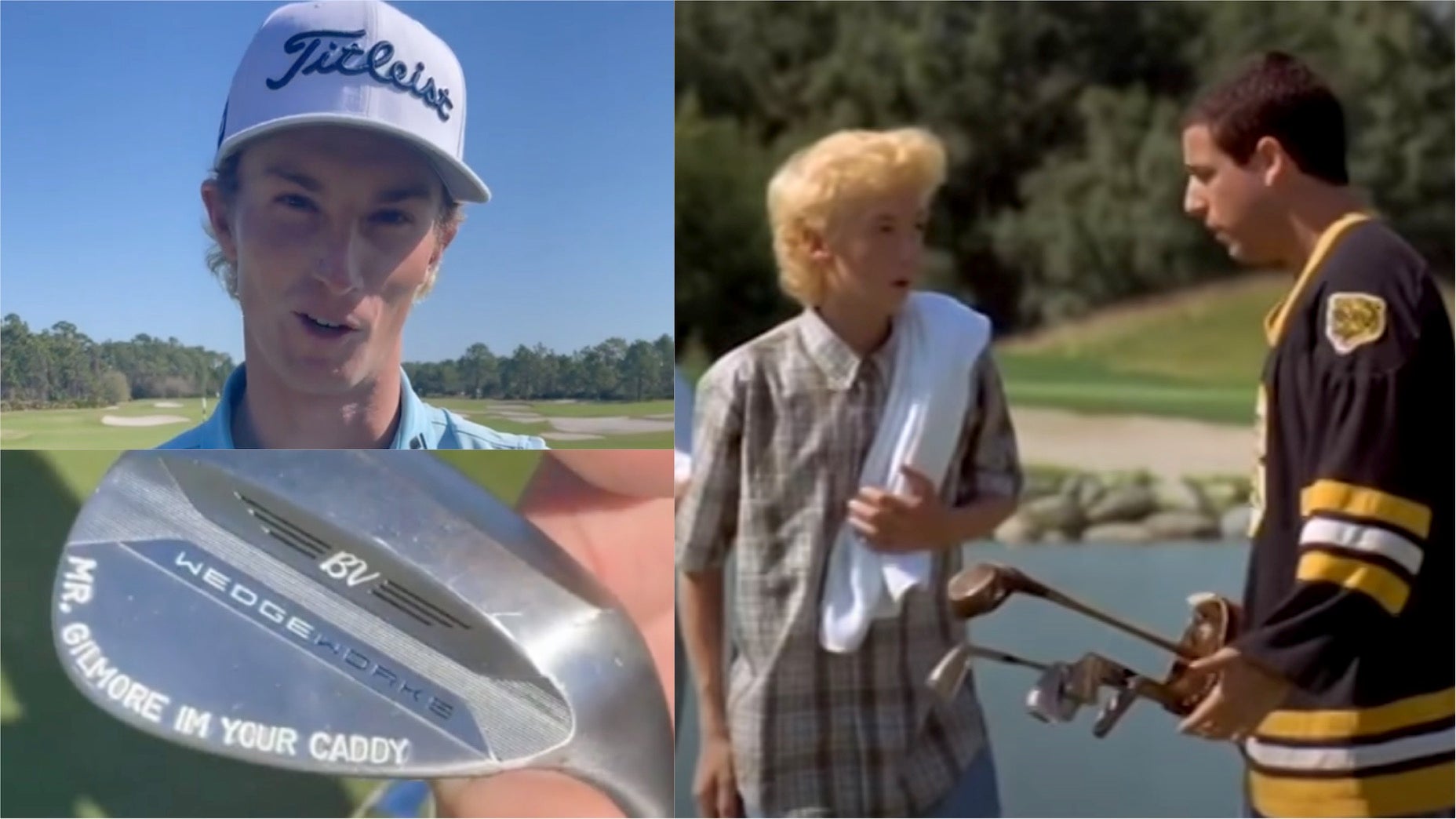 Gear Questions You’re Afraid to Ask: How do I know what type of wedge to use?

3 basics every golfer needs to know about wedge grinds