This is how high pro golfers hit all of their clubs 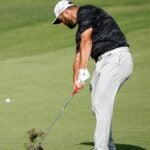 Ever wonder how high pro golfers hit their irons (and how high you should hit yours?)

If there’s one feeling in golf that keeps us hooked and falling in love with the game all over again, it’s the feeling of a well-struck shot, then looking up and seeing the ball towering in the air. They’re the kind of shots that you remember, and if you go to Tour events, probably the first thing you notice. There’s just something about sending a ball into flight that sticks with us.

But have you ever wondered how high your shots go? Or, rather, how high they should be going? For that we’re turning to a handy article on Trackman’s website, which shows the PGA Tour average for every club. With a driver, the average maximum height is just over 30 yards into the air.

You may have noticed perusing that chart that the maximum height for each club is effectively the same: They all hover around 30 yards. How is that possible?

As Trackman explains, it all has to do with the way the ball flies, which is influenced by launch and spin. Shorter clubs launch higher and have more spin, which means they reach the peak of their flight earlier and fall out of the air faster. Longer clubs have more speed and less spin, which mean they take longer to reach the apex of their flight but don’t fall out of the air as fast as they do.

Making sure all your clubs reach the same flight was actually an important key for Ben Hogan, who used to practice using a tree as a reference point. You can hear GOLF Top 100 Hall of Fame Teacher Chuck Cook and PGA Tour pro Jason Dufner talk about it below:

And if one of your clubs is traveling notably higher or lower than the rest? It is probably because your clubs need to get looked at by a good clubfitter, like our affiliate company True Spec Golf, and it’s a good reference point to keep an eye on in your game.